The discovery that a neo-Nazi group was behind the murders of several immigrants during a six-year killing spree is threatening to erupt into a full-blown scandal for Germany's security services which face awkward questions about their failure to tackle right-wing terrorism.

Chancellor Angela Merkel on Monday described the emergence of right-wing terrorism as a "disgrace to Germany" and pledged a thorough investigation.

The "National Socialist Underground," consisting of at least three members, two men and a woman, has claimed responsibility for the killing of eight Turks and one Greek man between 2000 and 2006, as well as the murder of a German policewoman in 2007, and two bombings in which more than 20 people, primarily with immigration backgrounds, were injured.

In a bizarre twist, politicians on Tuesday called for an urgent investigation into reports that an employee of the domestic intelligence agency, the Federal Office for the Protection of the Constitution, was at the scene of one of the crimes -- the killing of 21-year-old Halit Y. in an Internet cafe in Kassel on April 6, 2006.

That fact is not new -- the employee was interviewed by police years ago and eliminated from their enquiries. But even if it is found to be irrelevant, the development makes the case even more embarrassing to the agency, which is under intense fire for having been apparently unaware of the presence of a murderous neo-Nazi cell in Germany for over a decade.

The agent, reportedly described as "Little Adolf" by colleagues because he himself held far-right views, told police at the time that he was in the Internet cafe by chance, to seek contact with women via chat rooms, and that he didn't see the killing, which happened in another part of the cafe. It is unclear if he left the cafe shortly before the shooting or if he didn't hear the shots because the killers used a silencer. During a search of the man's home around that time, investigators found copies of Third Reich propaganda as well as extracts from Hitler's "Mein Kampf," which is effectively banned in Germany.

Officials said, however, that the man was close to the scenes of four of the other shootings. Hans-Peter Uhl, a member of Merkel's Christian Democrats, said on Tuesday that the behavior of the agent raised "considerable questions." The agent was fired and now works for the local government authority in the western state of Hesse.

Police searching the burnt-out house found four DVDs, packed and ready to be sent to the Left Party, several news organizations and Islamic cultural centers, in which the group bragged about the killings, poked fun at the police, and showed photos of blood-soaked victims, apparently taken by the killers themselves. The murdered men were all shopkeepers with two of them running doner kebab shops. As a result, the murders became known as the Doner Killings.

For years, police had insisted that the killings were committed by the Turkish mafia or shadowy nationalist groups and had effectively ruled out a far-right link. Muslim groups and the children of the men who died have accused the authorties of being blind to the threat of far-right violence, and having focused too heavily in recent years on combating Islamist terrorism.

Gamze K., 22, the daughter of Mehmet K. who was shot dead in his kiosk in Dortmund on April 4, 2006, recalled how the police speculated that her father had gambling debts or was killed by a protection racket or the Turkish mafia.

"We were suddenly under suspicion," she told Bild newspaper in an interview published on Tuesday. The police kept looking for dodgy business dealings supposedly done by my father. The police didn't take seriously our suspicion that it could have been neo-Nazis."

"I think something's wrong here," she said. "Why did the attackers suddenly kill each other? It wasn't just the three of them, there are influential men behind them."

The case has prompted urgent calls for a reform of the Federal Office for the Protection of the Constitution, which was set up to combat extremist groups and protect the democratic order in postwar Germany. It has 16 regional departments, one for each of Germany's federal states, and the department for the state of Thuringia, where the trio lived, has come under particular scrutiny.

Terrorists Were on Police Files

According to information obtained by SPIEGEL, Böhnhardt, Mundlos and Zschäpe were known to the agency's Thuringia department in the 1990s, when they became involved with the neo-Nazi scene there. They built fake bombs and hoarded weapons and explosives, but authorities lost sight of them in January 1998, when they went underground and embarked on a 13-year spree of murder, bombings and a suspected total of 14 bank robberies.

The case has also called into question the agency's practice of running paid informants in the neo-Nazi scene and in the far-right National Democratic Party (NPD). Critics are saying the system evidently isn't working, and that it may even be unintentionally funding the activities of the far right.

For example, the Thuringia agency paid a total of 200,000 marks (€102,258) to a man named only as Tino B. The man is the head of Thuringia Homeland Protection, a neo-Nazi group that the three terrorists belonged to in the 1990s. He doesn't appear to have warned the authorities about his three dangerous comrades.

The presence of paid informants is controversial for another reason -- it thwarted a legal bid to outlaw the NPD in 2003 when the Constitutional Court ruled that the presence of agency informants, some in senior positions within the party, would prejudice the case.

Chancellor Angela Merkel called on Monday for a review into whether the NPD should be banned. The party is seen as a flagship of the neo-Nazi scene in Germany. But to have any chance of succes, a legal bid to outlaw the NPD would require severing ties with informants, effectively sacrificing the authorities' ability to monitor the inner workings of the party.

Interior Minister Hans-Peter Friedrich has called for better coordination between the regional and national security authorities.

There are many unanswered questions in this case, the most pressing being whether the NSU had more members or helpers within the far-right scene. One suspected helper, a forklift driver named only as Holger G., was taken into custody on Monday on suspicion of helping the trio by giving them his driver's license in 2007 and his passport four months ago. There may well be more. Some have also wondered how the group financed itself. Their bank robberies since 1999 are reported to have raised up to €70,000 -- not nearly enough to live on over that time period.

Further questions surround the apparent suicides of Böhnhardt and Mundlos in their camper van. One of them was reportedly shot in the chest, the tabloid Bild reported -- an unusual suicide method. Also, both died from rifle bullets. Pistols are more usual in suicides.

The killing of a policewoman in 2007 in the southern city of Heilbronn is also a mystery. She was shot in the head while sitting in her car. Her colleague was also shot and seriously injured. Why take the huge risk of killing a police officer? Why did the killers hold on to weapons that would incriminate them? Investigators searching the burnt-out camper van and the Zwickau apartment found the police officers' Heckler & Koch P 2000 pistols and the Ceska 7.65 millimetre Browning used in the Doner killings. They also found the policewoman's handcuffs, her pepperspray and her Victorinox Swiss Army knife. Were they kept as trophies?

And what about the DVDs? How did they survive a fire that even melted weapons? "According to our official information the DVDs were secured in the rubble of the Zwickau flat," says one investigator. "But I admit that this fact raises questions."

Finally, are there more neo-Nazi terror cells out there? Anti-racism groups say right-wing extremism has been allowed to fester in parts of eastern Germany, with neo-Nazis left in charge of running the voluntary fire departments, organizing youth leisure activities and even running citizen's advice bureaus for welfare claimants in rural regions that have suffered from depopulation and economic decline since unification in 1990.

That is fertile ground, experts say, for violent cliques to get together and to graduate from beating up foreigners to planning murders and bomb attacks. 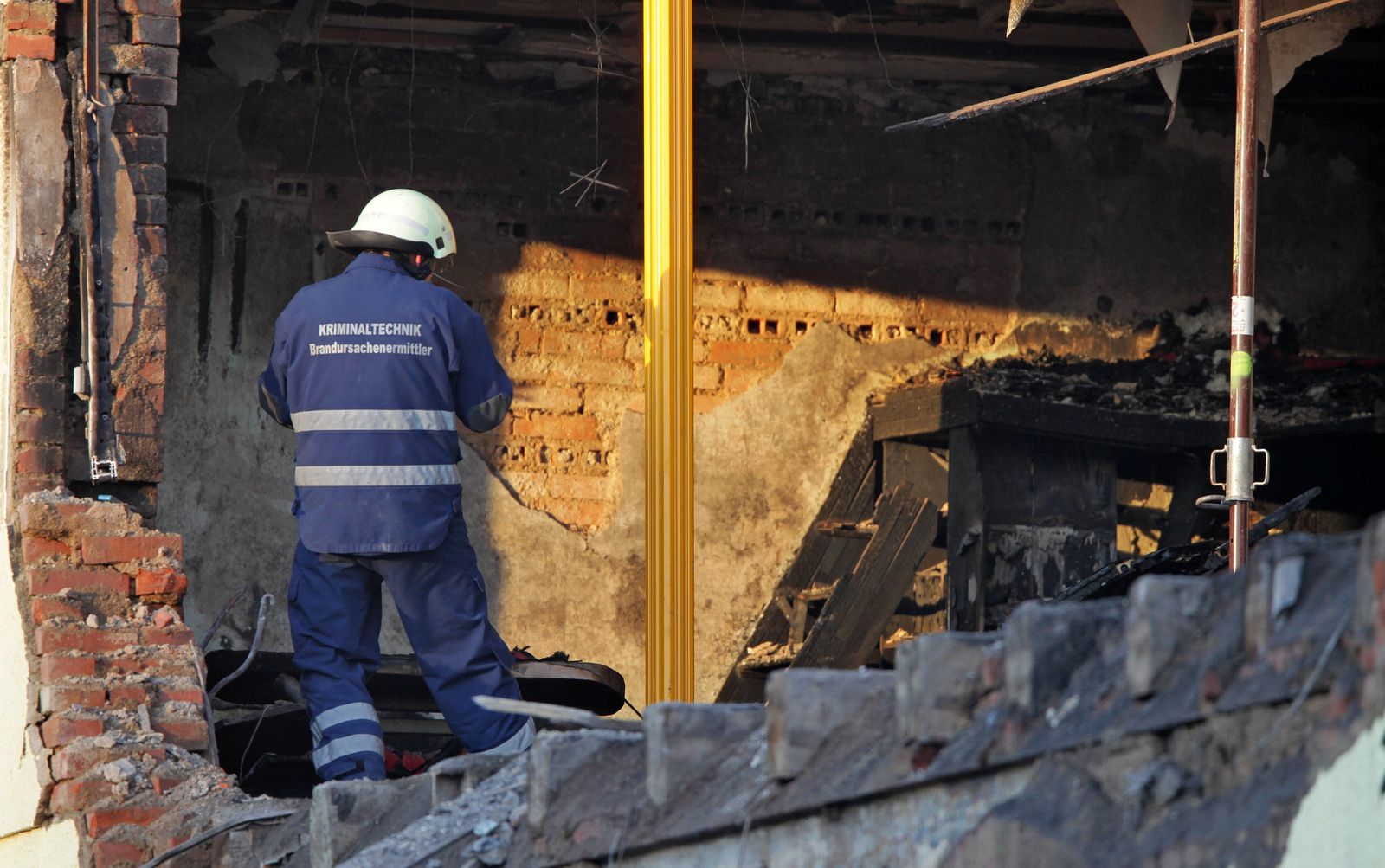 An investigator combs through the remains of the burned-out house in Zwickau looking for clues.