We're in a pretty suburb on the northern edge of Berlin. Irmela Mensah-Schramm, 63, walks along the neat rows of houses with their well-tended gardens. Occasionally, a resident hurries past her along the clean-swept sidewalks. The people who live behind the low fences want their peace and quiet. Strangers get suspicious looks around here. But that doesn't bother her.

She walks down the streets inspecting street signs and lampposts, armed with a large camera dangling from her neck and a white cloth bag with the words "Fight Nazis" emblazoned on it in big letters. 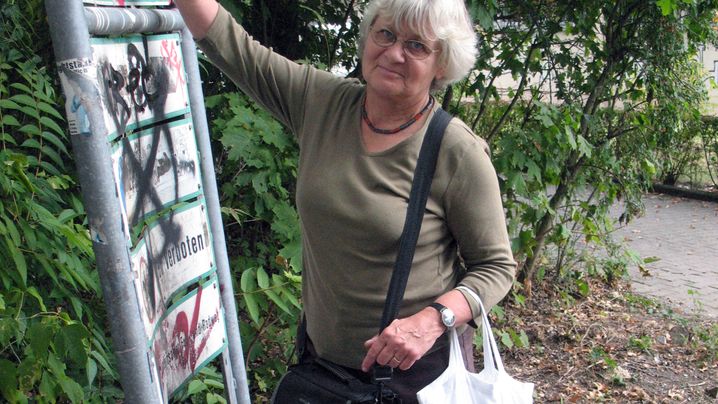 She stops at a lamppost and shakes her head angrily at a little campaign sticker attached to it with the logo of the far-right, anti-immigrant National Democratic Party of Germany (NPD). It bears the sarcastic message: "Have a Safe Trip Home." In a flash she delves into her bag, produces a metal scraper and starts vigorously scrubbing off the offending propaganda.

The scraping echoes across the street. "You get more Nazi muck hanging up around this well-off area than in any working-class housing estate in Berlin," she says as the paper shavings fall to the ground and get blown into a garden. The sticker is no more. Mensah-Schramm gives a satisfied smile. She's out hunting.

A Particular Type of Street Cleaning

The Berlin-based political activist has been removing neo-Nazi graffiti and far-right slogans for more than 20 years. Nazi symbols such as swastikas are banned in Germany. Officially they're called "unconstitutional symbols," and they account for the majority of far-right offenses registered by the domestic intelligence agency , the Federal Office for the Protection of the Constitution.

The authority counted more than 17,000 cases of far-right daubings in 2008. But police hardly ever prosecute the culprits. Irmela Mensah-Schramm thinks that's wrong. So she punishes the neo-Nazis in her own way -- by destroying their slogans.

Her mission began in the summer of 1986 outside her front door in the well-to-do lakeside district of Berlin-Wannsee. She was on her way to work when she saw a sticker that read: "Freedom for Rudolf Hess," a reference to the convicted Nazi war criminal serving a life prison sentence at the time in Berlin's Spandau Prison. It disgusted her and she wanted to tear it off, but her bus was waiting and she had to run. But the social worker could think of nothing else all day.

'I Stopped Looking the Other Way'

"I was angry that I hadn't scratched the sticker off," she recalls. She returned that evening and it was still hanging there. She couldn't understand why the many people who had waited at the bus stop that day hadn't bothered to remove it. "So I decided to stop looking the other way," she says.

Ever since then, "the political cleaning lady of the nation," as she calls herself, has been tracking down "Nazi muck." Armed with a scraper, nail varnish remover, a cloth and a camera, the pensioner combs through districts in Berlin and in other German cities several times a week.

Over the years, her voluntary scrubbing has turned into an obsession. She starts scraping wherever she sees Nazi symbols. In pedestrian underpasses, on buildings or subway train seats. If she can't remove something, she paints over it, preferably with brown paint. "I'm constantly at it. You have to keep going, you can't just do it sporadically," she explains.

Mensah-Schramm says she has removed more than 80,000 stickers and daubings in the last 23 years -- far-right, homophobic, anti-Semitic or racist slogans. After today it will be 78 more.

She's standing on tip-toe in front of a Stop sign, stretching her arm up, puffing and swearing, but she still can't reach the sticker. She doesn't notice the car that has stopped next to her. A young man is staring at her in amazement. She finally gets hold of a corner of the paper and tears a large part of it down. Now the driver realizes what she's doing, rolls down his window and calls out: "That's great what you're doing! Good that there are people who don't look away." She looks round breathlessly and gives him a satisfied nod.

But she doesn't get that kind of reaction very often. She says she has lost many friends over the years because her obsession got on their nerves. Her husband finds her work OK but he's afraid of accompanying her, she says.

"You're abnormal, you should accept other people's opinions," one female passerby once hissed at her. One man once said she "belongs in a gas chamber."

In the eastern town of Cottbus, a neo-Nazi tried to stop her from removing a swastika from a public power connection box.

"Leave it there," he shouted at her. "No, it's coming off," she replied calmly while she vigorously rubbed at it with a cloth soaked in nail varnish remover. "Then it was gone and we stood alone in this long street," she remembers. "The youth was beside himself with rage and came towards me threateningly." She walked towards him and stared him straight in the eyes. "What else should I have done. Cried for help? There was no one around." The youth didn't dare assault her so he walked off shouting abuse.

Mensah-Schramm takes a big swig from her water bottle. The sun is going down and she's been inspecting the streets for eight hours. She brushes her gray-white hair from her forehead and looks exhausted. But it's only a brief break. She finds more work on the flap of a clothes container in a little park -- a black and white sticker with the neo-Nazi slogan "Nationally Liberated Zone." It's a reference to a vision by right-wing extremists of an area that is free of foreigners, leftists, Jews, homosexuals, handicapped people, the ill, the homeless or any other target of their xenophobia. German authorities have proven that no such areas exist in the country, but there has long been debate over them. It's gone after a few seconds but some of the company logo on the container has come off with it.

"When I scratch off slogans things get broken sometimes. Window panes burst, corporate logos get scratched and the paint streaks on house facades aren't to everyone's liking either," she says with a mischievous smile. She knows that constitutes damage and trespassing and that she therefore occasionally commits an offense. Passersby regularly file legal complaints against her.

Whenever that happens, the pensioner argues that the Nazis started it. "You can repair what gets broken when you're cleaning it. But you can't repair the damage all this stuff does to human dignity." That argument never fails. So far all cases against Mensah-Schramm have been dropped.

She has won two awards for her work -- the Federal Medal of Merit in 1994 and the Erich Kästner Prize awarded by the Dresden press association in 2005. That too has helped her fend off legal action. The state clearly accepts and tolerates her work but it doesn't officially support it, and that makes her angry.

She spends €300 per month on cleaning materials and travel. Her traveling exhibition "Hate Destroys" shows photos of Nazi slogans she has removed since the mid-1990s. She also runs anti-racism workshops for young people. The project receives no state funding and would die if she didn't receive donations and spend her own money on it. She won't give up, she says. "Somehow everything always works."

It's getting dark and Mensah-Schramm is heading home when she spots one last NPD sticker, on the upper edge of a traffic sign. "The right-wingers put them up very high because they know I have trouble getting at them," she says. Then she flashes that indefatigable smile. "Tomorrow I'll bring along an extension for the scraper, the sticker won't stay up there," she says. 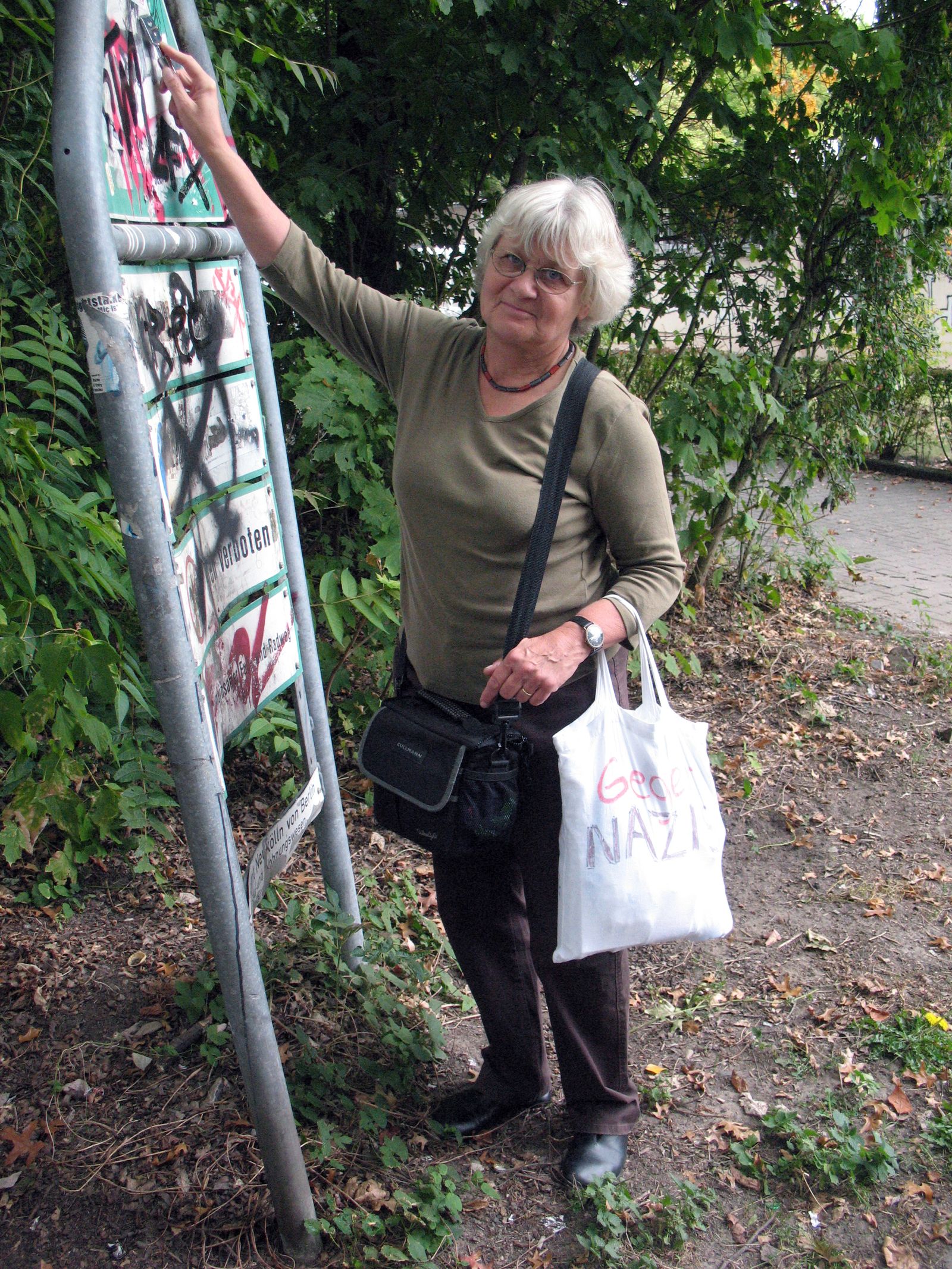 Irmela-Mensah Schramm has been scraping away Nazi slogans for 20 years.

Irmela Mensah-Schramm has been scraping away neo-Nazi stickers and far-right slogans from the streets of Berlin and other cities for more than 20 years.