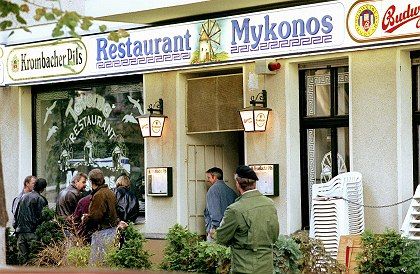 The two released men were convicted in 1997 of involvement in the 1992 murder of four Iranian dissidents in this 'Mykonos' restaurant in Berlin.

Two men jailed in Germany for the 1992 assassination of four Iranian opposition figures in a Berlin restaurant were released from prison and deported from Germany this week and last despite protests from Iranians in exile and the Israeli government.

Iranian Kazem Darabi was released and flown from Frankfurt to Iran on Monday, according to the German news service dpa. Lebanese citizen Abbas Rhayel was released on Thursday of last week and immediately deported to Lebanon.

The two men were given life sentences in 1997 for the killings, which took place in a Greek restaurant in Berlin called "Mykonos." Three of the victims in the attack were Iranian-Kurdish politicians in exile, the fourth was their interpretor.

In 2006, a court determined that each should serve at least 23 years before being considered for release on parole. Lacking further explanation from German officials, speculation as to why the two were released prematurely is widespread. German law allows for foreign citizens to be released early if they are immediately deported.

One theory making the rounds is that the men's freedom results from a deal for the release of a German tourist arrested by Iran in November 2005 and held for 16 months for illegally entering Iranian waters during a fishing trip. Donald Klein was released in March. "I was a hostage who was to be exchanged," he told reporters at a press conference following his release.

The government in Berlin has denied claims of a trade-off. "There is no such arrangement," Foreign Ministry spokesman Martin Jaeger told reporters in October.

The release of Darabi, considered the leader of the assassination team, has drawn severe criticism from a number of sources. "The early release of Darabi and the men behind him will be viewed in Iran as a weakness of the West and not as a generous move on the part of the German penal system," Wolfgang Wieland, a security expert for the Green Party, told the Associated Press.

This sentiment was echoed by Hamid Nowzari, a member of the Berlin-based Association of Iranian Refugees. "We think that Darabi's release is incompatible with Germany's fight against terrorism," Nowzari told the AP.

Israelis strongly opposed the release in the hope that Germany would hold on to Darabi to use him as leverage in learning the fate of Israeli fighter pilot Ron Arad, who was shot down in Lebanon in 1986. It suspects Iran, or the Iranian-supported extremist group Hezbollah, of knowing the pilot's fate. In 2004, Germany offered to trade Darabi for information about Arad, but Hezbollah did not agree to the deal.

In October, Israeli Prime Minister Ehud Olmert telephoned German Chancellor Angela Merkel to ask her to block the men's deportation. Members of Arad's family also traveled to Germany in October and made a personal appeal to Germany's Chief Federal Prosecutor Monika Harms, asking her not to release the prisoners until Iran provided information about Arad.

Prosecutors in the so called "Mykonos trial" caused a diplomatic uproar when they implicated Iran's supreme religious leader Ayatollah Ali Khamenei and President Akbar Hashemi Rafsanjani as having known and approved of the killings. Iran denied the charges, and both countries temporarily withdrew their ambassadors.