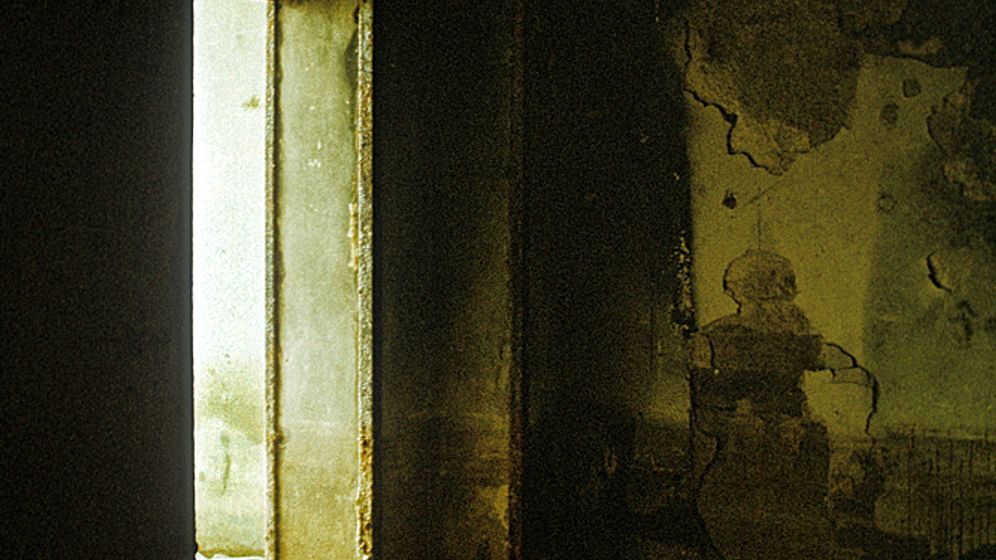 Robert Conrad knew things could get uncomfortable. There were the guards, the explosions, the dark tunnels. He could easily stumble across a detonation in progress, run into a policeman or even land himself in jail.

And yet, in the summer of 1987, Conrad donned a construction worker's coverall and a hardhat and hid his camera, a Praktica model with a 35-millimeter wide-angle lens, in a leather shoulder bag of the type carried by many workers in the German Democratic Republic (GDR) at the time. To lend his disguise verisimilitude, Conrad made sure a Thermos jug could be seen poking out of his bag. He wanted to be absolutely sure to look just like any normal construction worker.

Thus disguised, the photographer snuck up to the fence around the construction site on Berlin's Otto Grotewohl Strasse and climbed over the barrier. Once inside, he had to suppress the impulse to start running. "I walked very slowly across the site, as if on eggshells, so no one would notice me," he recalls. Conrad was uneasy. Where was the entrance into this underworld of dark concrete ruins that had been buried for decades under Berlin's streets? Would he be able to climb down into the infamous "Führer's bunker," where Adolf Hitler shot himself in April 1945?

Now, some 26 years later, Conrad holds one of the photographic slides for which he risked his neck back then thoughtfully up to the light and makes sure to dispel any possible misunderstandings. "I didn't go to the bunkers hunting for relics or out of some secret admiration for the Nazi regime," he says.

The office Conrad has just moved to in Berlin's Prenzlauer Berg district is still filled with the scent of freshly laid floorboards. The historic building's stucco ceiling was renovated just a few days before, revealing Art Nouveau decorations from 1905. It's a fitting space for Conrad, an architectural photographer with a passion for preventing old things from disappearing.

Essentially, Conrad and his camera have been doing precisely that for decades. Even as a teenager in the 1980s, Conrad traveled all over East Germany photographing the historic half-timbered buildings that the country's Socialist Unity Party (SED) was systematically tearing down and replacing with monotonous prefabricated concrete apartment blocks.

As a form of protest against forgetting history, Conrad lived illegally in buildings slated for demolition and saw himself as a chronicler of the government's mania for destruction. He got in plenty of trouble for it, too. Police interrogated him for hours, threatened him and rifled through his apartment. Studying at university was then out of the question for Conrad, so he got by doing a variety of simple jobs -- and defiantly continued to take photographs.

It was during this time that the nearly forgotten remains of the Nazis' bunker complex were rediscovered in Berlin. In 1986, the East German government made plans to erect a large apartment complex on the corner of Vossstrasse and Otto Grotewohl Strasse, now known as Wilhelmstrasse. In order for those Socialist blocks to go up, concrete from a darker past had to be demolished first. The ground under the construction site turned out to contain not only Adolf Hitler's former bunker, but also the remains of an air raid shelter used by the Neue Reichskanzlei, or New Reich Chancellery, and the foreign ministry.

This required the excavation of massive reinforced concrete walls located up to eight meters (26 feet) deep in the ground, which had to be removed and demolished piece by piece, a laborious undertaking. The victorious Red Army had given up on the "Führer's bunker" back in 1947, after Soviet soldiers attempted to blow it up. They were able to destroy the complex's ventilation shafts, collapse interior walls and even cause the four-meter-thick (13-foot-thick) bunker roof to drop by 40 centimeters (15 inches) from the force of the explosion, but the rest held. This was followed by further blasts 12 years later, but then the East German government filled in the entrances to the ruin of Hitler's bunker, dumped dirt on top of the site and let grass grow over the whole thing in the truest sense of the phrase. That's how things remained until the construction project that began in 1986.

"Of course there was nothing in the newspapers about the Nazi bunkers. That was very much a taboo subject, as was everything about the Nazi period," Conrad explains. "Officially, they were just constructing a new residential neighborhood." The photographer himself discovered the bunker ruin only by chance, when his route as an apprentice bus driver took him past it on Otto Grotewohl Strasse. "My seat in the bus was raised, so I could see over the fence into the construction site," he recalls. "Suddenly I saw this completely insane landscape with enormous concrete ruins that had buried for decades protruding out of the ground." Exposed by the construction, the underground complex now looked as if it were an aboveground bunker.

His photographer's hunting instinct was instantly awakened. He asked around about the history of the site, read what little available information he could find about the underground Nazi bunker and had friends in West Germany send him more material. He started hanging around the site, photographing from the outside the concrete expanse, huge excavating equipment and some of the demolition blasts. He also engaged construction workers leaving the site in innocuous conversation. "I was dying to find out if they needed a special permit in order to be there," Conrad explains. He was relieved to learn that access to the site didn't appear to be under particularly restrictive control. It seemed his plan might work.

Things went smoothly to start with. On his first visit, Conrad found himself in the New Reich Chancellery bunker. He worked hectically, worried he might be caught at any time, taking pictures of rusted ventilation pipes, tiled walls, safes and projectiles. Despite the haste with which he had to work, Conrad is critical of his work as a younger photographer. "Those weren't my best shots. Today I would go about it much more systematically," he says.

But at the time, he simply pointed his camera anywhere he could. The most important thing was not getting caught. "My greatest fear was that they would assume I was trying to escape," Conrad says. The concern wasn't an unreasonable one, since the site was located in direct proximity to the border with West Berlin. "As far as I knew, parts of the labyrinth of bunkers ran along under the Wall and even extended into the death strip."

Yet the construction site continued to exert its pull on Conrad like an addictive drug. Since no one noticed him the first time, he went again. And again and again, perhaps 30 times in total, though he no longer remembers exactly. Sometimes months passed between his visits, and sometimes just a few days.

It was also a race against the clock, as the excavators dug deeper and the workers removed more reinforced steel. Why wasn't Conrad able to stop going there? He considers the question, gazing at the slides spread out on the lightbox in his Berlin office, then says: "Being down there and hearing the echo of your own footsteps, discovering things from a completely distant chapter of history -- it was that feeling of traveling back in time that fascinated me so much."

So he kept pushing his luck. Once he was scared half to death when he suddenly came across another man in the Reichskanzlei bunker. "It was unbelievable," he says. "He was sitting there as calm as could be with a miner's lamp, drawing the gloomy scene on a small easel," Conrad says. Was this a kindred spirit, another person interested in capturing architecture before its destruction, no matter how despicable the behavior of the people who originally constructed it? To this day, Conrad isn't sure. "We talked to each other, but the mistrust was too great," he says. "He didn't dare to ask me why I was there, and I didn't dare to ask him either."

It made for a grotesque scene: Two men holding their tongues out of fear of the communist dictatorship, inside a Nazi bunker. After a brief pause, both went on about their work, one with his camera and the other with his charcoal.

A couple of visits in, Conrad finally found the entrance to the infamous bunker where Hitler and his inner circle barricaded themselves when the Red Army reached Berlin. The complex consisted of a first bunker constructed in 1935 and then the actual, far more bombproof "Führer's bunker," which wasn't finished until 1944. But Conrad was disappointed by what he found. Neither part of the bunker complex contained the "original setting of insanity" he had hoped to see. "Too many Allied soldiers and curious Berliners had already been through there in the first years after the war, and all of them took souvenirs," he explains.

Conrad certainly found some items: decaying bits of furniture, projectiles, the epaulet of a high-ranking Wehrmacht officer, a gas mask and empty sparkling wine bottles. But the "Führer's bunker" itself, constructed from 1943 to 1944, was so flooded with water that it was hardly possible to get inside. It also now consisted of just one large room, since the Soviet army's demolition blasts had broken down the interior walls. In the first bunker, though, the one constructed in 1935, Conrad believed he had found the room where Magda Goebbels poisoned herself and her children with cyanide shortly before the end of the war. "The bunk beds were halfway collapsed, rusted and standing in the groundwater," he says.

It was after this visit that Conrad was caught for the first time. Police examined the contents of his leather shoulder bag, patted him down and quickly found the film he had hidden in his socks. But to his surprise, they gave him comparatively little trouble. They didn't accuse him of trying to escape East Germany either. "They didn't really understand what I was doing down there, they just told me I should cut out the nonsense," he says. But Conrad didn't cut it out. In fact, the fake construction worker was caught four more times and had a dozen rolls of film confiscated.

Then, in 1989, it was all over. The removal work ended and the rest of the "Führer's bunker" -- the floor slab and the external walls -- were filled in with rubble, sand and gravel.

Just a few months later came the demise of another massive concrete construction -- the fall of the Berlin Wall made Conrad's dream of studying architecture, denied to him in the GDR, possible at last.

In his spare time, though, Conrad remained true to his old passion. To this day, he seeks out lost worlds, photographing abandoned barracks, apartment blocks and factories shortly before they are torn down. These days, though, he no longer has to disguise himself as a construction worker.

Additional photos can be viewed at the Lumabytes agency website.