On paper, at least, it seems like a no-brainer. A female chancellor and a female labor minister combined with a shocking lack of women in senior management positions at Germany's largest companies -- the situation, one might think, is ripe for the introduction of legally mandated quotas.

That, at least, seems to have been the calculation of German Labor Minister Ursula von der Leyen when she told SPIEGEL this week that it was time to pass a law requiring a minimum presence of women in the senior leadership of publicly traded companies.

"For the last 10 years we have had a voluntary agreement with the private economy," von der Leyen said. "The agreement has been an abysmal failure."

Now, however, it looks as though von der Leyen's push for a quota system has likewise failed. On Wednesday, Chancellor Angela Merkel's spokesman Steffen Seibert said "there will be no legally mandated quota." With many in her governing coalition expressing opposition to the proposal in recent days -- and her party facing a number of vital regional elections this year -- Merkel said on Wednesday that she favors the establishment of another deadline by which German companies are to increase the number of women in leadership positions. Seibert insisted, however, that the timeframe will be limited.

Von der Leyen's demand for a quota system came in the wake of a new study released in January by the German Institute of Economic Research (DIW) which found that just 2.2 percent of leadership positions at Germany's top 100 companies are women -- a mere 11 out of 490. The share increases once the pool of firms is broadened, but Germany ranks poorly in international comparisons -- despite a growing number of women in political leadership.

The idea likewise seemed to have gained momentum across Europe recently. Both France and Spain have recently passed laws that will require publicly traded companies to install more women in leadership positions and Holland is currently debating the concept. European Commissioner of Internal Markets Michel Barnier has likewise said that he looking into a Europe-wide quota system.

Still, von der Leyen's proposal for a quota system was not well received in Berlin. Several members of the business-friendly Free Democratic Party (FDP), Merkel's junior coalition partners, made it clear that they were opposed to the idea. "Ms. von der Leyen's idea is not an acceptable concept for the FDP," said FDP General Secretary Christian Lindner this week. Party head Guido Westerwelle, who is also Germany's foreign minister, likewise indicated that his party would oppose a quota system.

Objection came from within Merkel's own conservatives as well. Horst Seehofer, head of the Christian Social Union -- the Bavarian sister party to Merkel's Christian Democrats -- said he preferred a volutary agreement with German industry. And Thomas Bareiss, an economics expert within the CDU, said that a quota for women sounds "more like a socialist planned economy than a social market economy." Even Kristina Schröder, Merkel's 32-year-old family minister -- likewise from the CDU -- expressed her opposition to von der Leyen's concept of legally mandated quotas.

Merkel, it is said, is privately in favor of a legally mandated quota system -- particularly given the fact that the situation hasn't changed much in the 10 years since Germany's largest companies agreed to work on increasing the number of women in top leadership positions.

Still, the timing of the debate may very well have sealed its fate. Merkel's coalition with the FDP has gained a reputation for infighting. Indeed, the bickering has marked her government to such a degree, that her CDU, but particularly the FDP, face an uphill battle in several of the seven state elections on tap for this year -- despite Germany's healthy rebound from the economic crisis. Merkel could ill afford yet another political battle within her cabinet.

Von der Leyen, for her part, remains convinced that a quota system will come sooner rather than later. She too recognizes that quotas are not possible at the moment, she said on Wednesday. She remains convinced, however, that such a system is on the horizon.

"If we don't find an answer to the question as to what happens should nothing changes in senior management and boardrooms," she said, "the German labor market will fall hopelessly behind in the international competition for the best female minds." 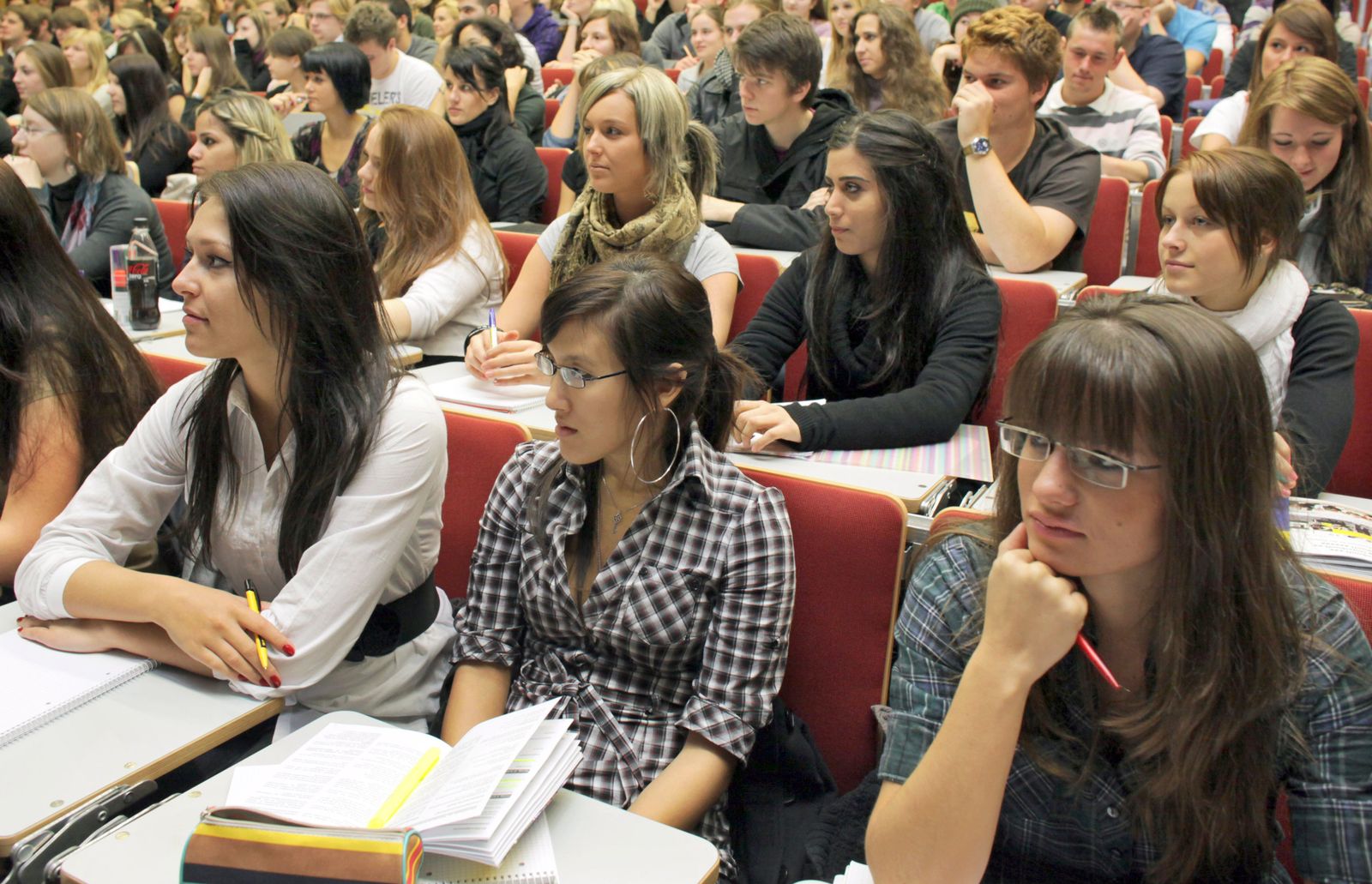 Students at the European University Viadrina Frankfurt: Women have better levels of educational attainment than men in Germany, but they still comprise only 2.2 percent of leadership positions at top German companies.