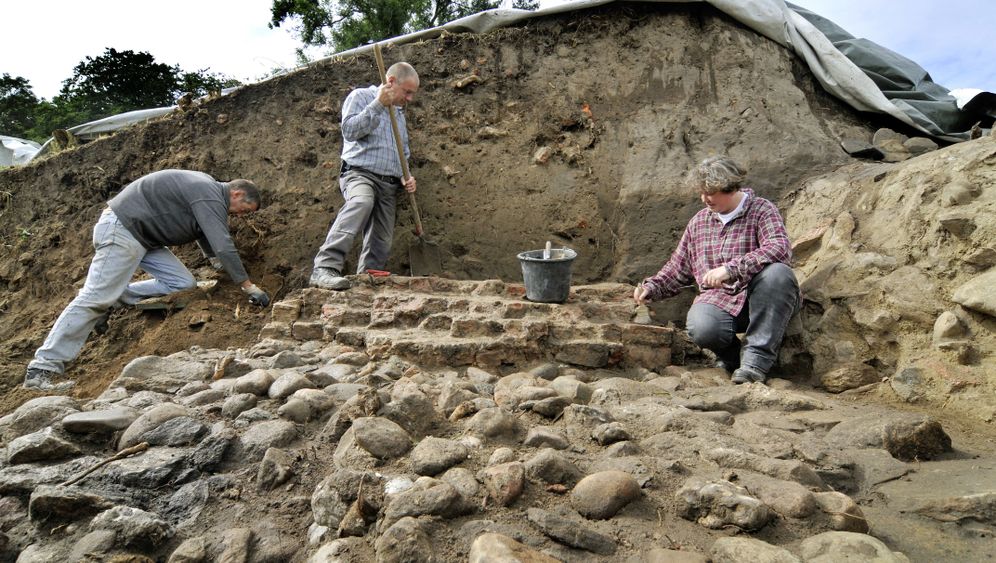 Their attacks out of nowhere in rapid longboats have led many to call Vikings the inventors of the Blitzkrieg. "Like wild hornets," reads an ancient description, the Vikings would plunder monasteries and entire cities from Ireland to Spain. The fact that the Vikings, who have since found their place as droll comic book characters, were also avid masons is slightly less well known.

The proof can be seen in northern Germany, not far from the North Sea-Baltic Canal. There, one can marvel at a giant, 30-kilometer (19-mile) wall which runs through the entire state of Schleswig-Holstein. The massive construction, called the Danevirke -- "work of the Danes" -- is considered the largest earthwork in northern Europe.

Archeologists have now taken a closer look at part of the construction -- a three-meter-thick (10 feet) wall from the 8th century near Hedeby (known as Haithabu in German). It is constructed entirely out of stones collected from the surrounding region. Some of them are only as big as a fist, while others weigh as much as 100 kilograms (220 pounds). "The Vikings collected millions of rocks," says archeologist Astrid Tummuscheit, who works for the state archeology office of Schleswig-Holstein.

A Customs Station, an Inn and a Bordello

At a press conference Friday, Tummuscheit's team announced a further find -- one that they are calling a "sensation." The researchers have discovered the only gate leading through the Danevirke, a five-meter (16 feet) wide portal. According to old writings, "horsemen and carts" used to stream through the gate, called "Wiglesdor." Next to it was a customs station and an inn that included a bordello.

For a century, archeologists have been dreaming of finding this gate between Denmark and Charlemagne's empire. Experts knew its approximate location, but archeologists were not allowed to dig: an old roadhouse was in the way. "Café Truberg put the brakes on everything," says Claus von Carnap-Bornheim, head of the Schleswig Holstein archeology office.

Things only began moving forward when the café went broke and could be purchased in 2008 with help from the AP Møller-Fonds, a fund belonging to Arnold Maersk, the 97-year-old Danish owner of the world's biggest container shipping fleet. The energy company E.on Hanse, the E.on subsidiary responsible for northern Germany, paid for the building to be demolished and the archeologists could move in. The new find is certain to attract significant attention above Germany's northern border as well -- the Danevirke is seen as a national treasure in Denmark. Queen Margrethe II of Denmark has visited the site, as has Prince Frederik.

New calculations as to the age of the construction indicate, however, that the earliest parts of the wall might have been built by the Frisians and not by the Danes. Archeologists now think the foundation stone might have been laid as early as the 7th century.

Known for their Pillaging Ways

The Frisians, who lived on the west coast of what is now Denmark and on a number of islands in the North Sea, were fighting for supremacy in the region with three other peoples: the Danes, the Slavs and the Saxons (see graphic). "It was the Kosovo of the early middle ages," says Carnap-Bornheim. In the end, however, it was the Danes who emerged victorious. According to contemporary records, King Göttrik of Denmark ordered in 808 that the border of his empire with that of the Saxons be fortified.

But why make such an effort? To what end did the Vikings pile up millions of tons of rocks on their border? Comparative structures like border fortifications built by the Romans or the Great Wall of China were built to protect them from marauding hordes. But in the case of the Danevirke, the builders themselves were the ones known for their pillaging ways. In the 8th century, Denmark had neither cobblestone roads nor houses made of stone. The pagan king was guarded by fanatic warriors wearing animal costumes -- so-called "berserkers."

Only their long boats were state-of-the-art -- fast and light but easily navigable. They allowed the Danes to develop a formidable network of trading routes. They plied Russian rivers all the way to Byzantium and sailed the North Atlantic to far-away Iceland, Greenland and even the northern reaches of North America.

But there was an Achilles heel in this far-flung trading empire, and that was at Hedeby. In order for goods from the east to be shipped to the west, they had to cross the narrow strip of land at the base of present-day Denmark. Traders would sail inland on the Schlei Inlet, but when they got to Hedeby, their wares were offloaded and carted overland to the Treene River, 18 kilometers away. Only there could the goods be reloaded onto boats and sailed into the North Sea.

For the duration of this short overland trek, the valuable goods -- including gold from Byzantium, bear pelts from Novgorod and even statues of Buddha from India -- were open to attack from the mainland. In order to protect this important trade artery, archeologists now believe, a bulwark of earth, stone and bricks was constructed. The Danevirke, in other words, was little more than a protective shield for commerce.

In the coming weeks, archeologists hope to excavate the newly discovered gate right down to the old street level. They are hoping to find old paving stones, hinges or postholes -- the remains, perhaps, of the erstwhile gate into the land of the Vikings.