It was a quiet and professional operation, exactly what one would expect in the world of intelligence. Acting quickly and decisively, two plainclothes officers apprehended a man at the Grosshesselohe commuter train station near Munich. They searched the man from head to toe for weapons, handcuffed him, led him to an unmarked car and sped away.

The bystanders were shocked, partly because some of them knew the man who had just been taken into custody. He was their colleague, Anton K., a man who, like them, worked for a special "company" whose offices are located just a 10-minute walk from the train station in the suburb of Pullach: the Federal Intelligence Service (BND), Germany's foreign intelligence agency.

When the Munich Higher Regional Court begins hearing the case on Wednesday, the public will become witness to the sort of true crime story that every intelligence agency in the world would prefer to keep under wraps.

The defendants are Anton K., a BND agent for many years, and his interpreter. The trial revolves around money and the betrayal of secrets. Love, sex and a betrayed wife are also part of the checkered tale, which takes place against the seedy backdrop of Kosovo's criminal underworld. In other words, the case that the federal prosecutor general is now preparing is the stuff of a larger-than-life drama, the sort of material that would normally be found in the movies or in bestsellers.

While the outcome of the trial remains uncertain, it is already clear that there will be at least one loser: the BND. If the prosecution wins its case, the agency will face the embarrassment of having to admit that one of its agents was out of control for years, and that a career spy gave away state secrets in the height of passion while on assignment in Kosovo. But an acquittal would be just as embarrassing for the agency, because it would show that the BND had expended tremendous resources pursuing one of its employees.

The whole thing began on Feb. 21, 2005, when Anton K. reported for duty in Kosovo's capital, Pristina. Anton K., a former career soldier, was officially in Pristina as a diplomat working for the German Foreign Ministry. But his real assignment from BND headquarters was much more sensitive: K. was charged with building up a network of reliable sources -- a challenging and dangerous job, particularly in a place like Kosovo.

K., who had left his wife and children behind in southern Germany, rented an apartment in the city's upscale diplomatic neighborhood. He changed his appearance so that he no longer looked like he had during his military days. He grew his hair to shoulder length and walked around the city in flip-flops and polo shirts.

A few weeks later, the new agent had already scored one of his first successes. K. was sitting in a street café talking to his family in Germany on his mobile phone, speaking in the Swabian dialect of southwestern Germany, when a young man approached him. He was Murat A., an inconspicuous-looking retail salesman with blondish brown hair who was then in his mid-20s and spoke with a perfect southern German accent. He called himself Afrim and said that he was of Macedonian-Albanian origin but had grown up in Offenburg in southwest Germany.

Afrim seemed to be the perfect interpreter. K. sent a request to BND headquarters to be allowed to use him as such. The request was quickly approved after the young man had passed a security check. From then on, Murat A. was also an official employee of the German Foreign Ministry.

Then, the two men fell in love. Afrim moved into Anton's apartment. The BND agent should have reported this to his superiors, but he didn't. The professional and personal relationship between the two men continued in Kosovo unnoticed for about two more years. The BND was satisfied with K.'s work, and in early 2007 it extended his assignment until 2009.

But then K.'s wife contacted the BND. The couple had had a serious argument during K.'s Christmas vacation at the end of 2007. K.'s wife told the BND officials that her husband had removed her name from his life insurance policy and made his interpreter the beneficiary instead. She said that she could provide proof in the form of a letter from the insurance company.

Since then, the dispute has revolved around who exactly can be accused of misconduct -- aside from the fact that the agent and his interpreter were required to report their relationship to the BND. Are they simply being sacrificed as "pawns" by a homophobic agency, as their attorneys claim?

Or is there more to the case, and is it really about the betrayal of state secrets? And why can't the BND solve its problems internally, as every spy novel aficionado would expect?

Passing on Secrets in the Bedroom

Instead, the BND petitioned the federal prosecutor general to launch an investigation and used a false pretext to order its two employees, the agent and the interpreter, to return to Munich, where they were arrested, K. on the platform at the Großhesselohe train station and Afrim at his hotel. They were released the next day, apparently because there was insufficient incriminating evidence to justify detaining them.

The two men gave up their apartment in Kosovo and moved together to a town outside Stuttgart, where they are now awaiting trial after having spent 40 days in pretrial detention last spring.

It will be a difficult case for the Munich court. The judges will have to get to grips with the complicated situation in Kosovo and within the intelligence community. Particular attention will be paid to K.'s meetings with his sources. Reports about such conversations with informants are normally transmitted directly to the BND via secure networks.

The federal prosecutor general is accusing the agent of having made these classified reports "accessible" to his domestic partner. In addition, he is charged with having passed on internal BND information about individuals and structures, as well as a document that contained classified information from a European partner agency, apparently British intelligence. Anton K. is accused of divulging classified information either through careless talk, by leaving it on the screen of an open laptop or by revealing it "in the bedroom."

The allegations against Murat A., who is believed to have obtained insights into "the entire network of sources of the BND's Kosovo office," are at least as serious. The interpreter allegedly had connections to organized crime, as well as having been involved with the Albanian and Macedonian intelligence agencies. A charge that Afrim submitted improper expense claims to the value of €14,700 for alleged loss of income, seems less serious. The prosecution has not even claimed that Afrim passed on the classified material to their parties.

When contacted by SPIEGEL, the BND refused to comment on the case.

The attorneys representing Anton K. and Murat A. say that the charges are "absurd." A., in his capacity as K.'s interpreter, was already present during the supposedly incriminating conversations with informants, they point out. Besides, the attorneys argue, the document from the partner agency was turned over openly and contained no classified information. And according to A.'s attorney, Christian Stünkel, his client's supposed contact with organized crime was part of an assignment K. had given him. Murat A. was apparently asked to gather information about a local crime boss in the city of Tetovo.

Stünkel also says that his client had believed that he was working for the German Foreign Ministry, at least until he was arrested, and that his alleged activities for local intelligence agencies are "nothing but the BND's assertions."

"The core of the affair is so ridiculous," says K.'s attorney Sascha Jung, "that it's a complete mystery to us as to why the BND would knowingly risk the damage potentially resulting from its actions." 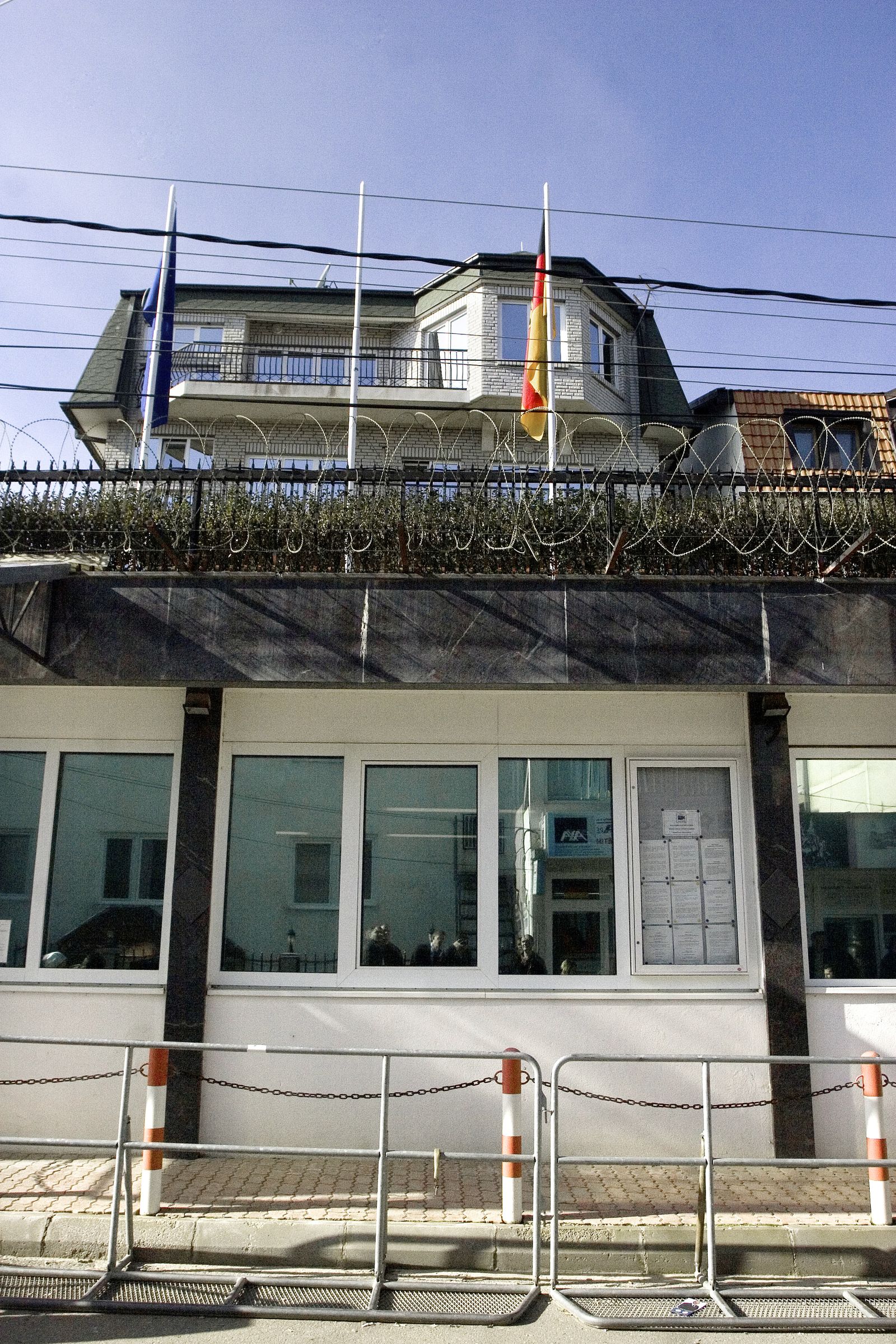 The Germany Embassy in Kosovo: A trial is about to begin of a German spy who allegedly betrayed state secrets.