Josef Frindt took his secret to the grave. When he passed away at the age of 81, the pastor in the western German town of Dorsten left a congregation mourning a pious man of God. But what the congregation didn't know was that their pastor had also worked for East Germany's notorious secret police, the Stasi.

Under the code name "Erich Neu," the pastor is believed to have submitted 95 informant's reports, including ones on a colleague who even at the time showed a great deal of potential: Joseph Ratzinger, better known today as Pope Benedict XVI. Frindt, who studied and later taught in the city of Münster, delivered information on up-and-coming theologians and future church dignitaries there, including the future pope, who was working at the time as a professor.

Two years after Frindt's death, research carried out by the Berlin-based agency of the Federal Commissioner for the Stasi Files has brought to light Frindt's alleged activities as an agent of communist East Germany. The revelations have shocked members of his Sacred Heart congregation in Dorsten. "Many found it impossible to imagine this," says one church leader. "Now they're looking for reasons why he might have done it."

These revelations from the Münster area are unfamiliar territory for citizens of the former West Germany, who believed for years that the trauma surrounding the Stasi had nothing to do with them. "Unofficial collaborators," as informants from within the population were known, and the reports they filed with the Stasi, were considered a problem exclusive to East Germany. Spies within West Germany, such as Pastor Frindt, belong to a forgotten chapter of German history.

This week, the commission for the Stasi files will publish a handbook on the HVA, the Stasi branch that handled foreign intelligence and was run by legendary spymaster Markus Wolf. The book offers new insight into the Stasi's work in West Germany, making clear for the first time just how purposefully and extensively the East German intelligence service had West German politics and society in its sights.

It's now possible to reconstruct in unprecedented detail where and how the Stasi cast its nets. The organization had 149 informants active just in Bonn, the former West German capital. There were 542 in West Berlin.

It seems the HVA recruited most of these spies from industrial sectors, as a way of obtaining Western technological knowledge. It also maintained excellent connections in the center-left Social Democratic Party, where 78 unofficial collaborators and other contacts kept East Berlin up to date, 13 of them serving as sources of information on activities within the party's executive committee. The Stasi was also well informed on internal matters in unions, churches and universities.

In December 1988, there were 1,929 West German citizens serving as unofficial collaborators or contact people for the German Democratic Republic (GDR), as East Germany was known. In most cases, however, their real names as well as the reports they submitted have remained unknown, after Stasi employees shredded most of the material concerning their West German agents when the East German system collapsed.

Until now, only spectacular isolated cases offered hints of how well connected the GDR's secret police were in West Germany. In one famous example, West German Chancellor Willy Brandt's aide Günter Guillaume turned out to be a Stasi informant. The Bundesnachrichtendienst (BND), the German foreign intelligence service, and the Office for the Protection of the Constitution, the country's domestic intelligence agency, also had spies within their ranks, passing information to the Stasi.

But that wasn't all by far. Over the course of four decades, the HVA introduced around 12,000 unofficial collaborators into West Berlin and the rest of West Germany, collectively referred to as the "area of operations." The Stasi files agency is working to reconstruct a more detailed picture, sorted by location and institution, of how these collaborators worked. Helmut Müller-Enbergs, a researcher on the Stasi, started by investigating former informants in the city of Münster. In December 1989, the East German intelligence service still had 16 unofficial collaborators there, informing on around 400 people.

Münster interested the Stasi for two reasons: It was both an important stronghold for the center-right political party Christian Democratic Union (CDU) in the state of North Rhine-Westphalia and a university town with a left-wing scene. Stasi boss Erich Mielke had his agents seek out unofficial collaborators to work within the conservative political establishment. They attached themselves to the police and armed forces and worked their way into the political system. They also recruited students, promising young talents who might one day rank among West Germany's leaders, and thus become important informants for the GDR.

The Stasi also had multiple people placed within churches, Christian groups and publishing houses in Münster. The newly restored documents leave Müller-Enbergs with "no doubt" that unofficial collaborator "Erich Neu" was in fact Frindt. As a member of the Diocese of Münster, the pastor was acquainted with Werner Thissen, later to become archbishop of Hamburg. He in turn knew Ratzinger, who already enjoyed a close relationship with Rome.

How exactly the Stasi was able to lure Frindt in is likely to remain a mystery, and the precise content of his reports is unknown. It's possible he hoped collaborating with the Stasi would improve conditions for his sister, who lived in East Germany. Or perhaps the pastor, who had struggled with alcoholism for a time, was susceptible to blackmail.

It's likely that monetary rewards played a role for many unofficial collaborators in the West. In Münster, the Stasi managed to establish informants in many government agencies. Stasi collaborators, for example, tapped the telephones at police headquarters. There were also collaborators within the Bundeswehr, the West German armed forces, for example at "Inspection Facility 53," whose work on the toxicity of smoke bombs interested East Germany.

Three businesses in Münster were also targets of Stasi observation, and a large number of collaborators filed reports from Münster University. An unofficial collaborator known as "Park," for example, worked in the university library and compiled special dossiers on various individuals. Presumably, the Stasi hoped to find other potential spies -- left-leaning students with sympathies for the GDR might prove useful in the future.

Proud of Their Work

Some former West German collaborators remain proud of the work they did for their brothers in the East. Peter Wolter is one of them. As a student of sociology and philosophy at Münster University in the 1970s, he joined a Marxist student group called Spartakus, which was secretly financed by East Germany. Wolter visited East Berlin frequently, and came into contact with the HVA there.

He established a successful career as a journalist, working for the German Press Agency (DPA) and holding a senior position at Reuters news service. The Stasi was particularly interested in a relative of Wolter's who worked in Cologne for the Office for the Protection of the Constitution. Peter Wolter sent reports to East Berlin over a period of 12 years.

Wolter was arrested soon after German reunification. He admitted to having worked for the Stasi, but insisted he had not been a spy or an agent, rather describing himself as a "scout." A court in Düsseldorf sentenced Wolter, who had founded the homeless newspaper "Draussen!" ("Outside!"), to two years on probation.

To this day, he defends his time as a West German Stasi collaborator. He "helped Europe to have half a century of peace," he says. 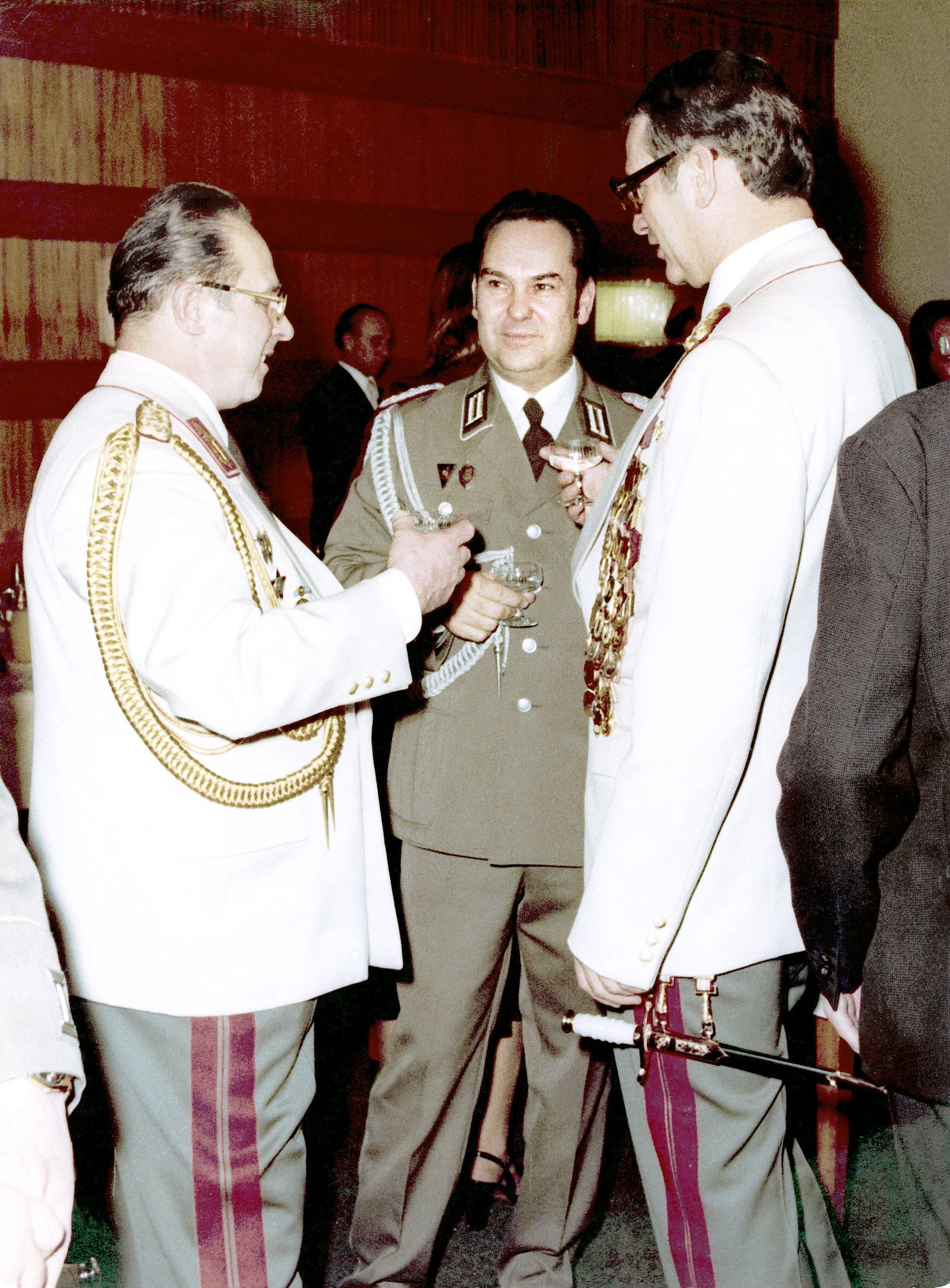 Stasi head Markus Wolf (right) is seen with colleagues in this 1985 photo.