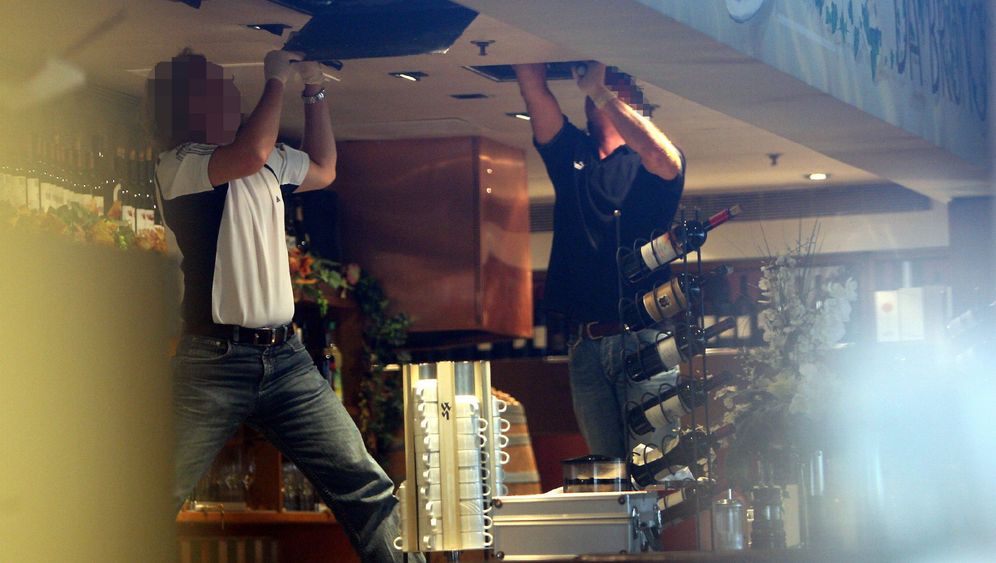 In the early summer of 2012, Gabriele S., a small business owner, let his frustrations loose on the phone. "I swear to you, I will tear off his head," the native Sicilian ranted to an informant. "He is a major league bastard!" He wanted to kill the man, "eradicate" him. This was followed by more swears and curses.

The lively conversation, which was being listened to by the Cologne police, turned out to be very valuable for the officers of the special "Scavo" commission -- giving them insight into the internal functioning of two supposed Mafia groups in the Western German state of North Rhine-Westphalia. The conversation showed investigators how the perpetrators divided up their turf and resolved or escalated conflicts.

After all, Gabriele S. -- a former shepherd from the small town of Licata -- doesn't merely have a fiery temperament, he also has criminal interests. According to the investigators, he ran a network of shell companies and helped cheat the state and the social security benefits office of many millions of euros. Gabriele S. and three accomplices are currently on trial at the Cologne regional court for, among other things, organized tax fraud. The verdict is expected on Wednesday.

The Sicilians are accused of owning 17 seemingly construction-related businesses and employing straw men as managers. According to the indictment, the men used the companies to help launder money in exchange for a fee.

The case of Gabriele S. and his accomplices seems to be exemplary of the construction sector, which, according to an internal study by the North Rhine-Westphalia State Office of Criminal Investigation (LKA), has been broadly infiltrated by bogus companies. In the Rhine and Ruhr regions, these fake businesses are mostly dominated by southern Italians who, in turn, according to the paper, have frequent ties to Cosa Nostra.

Strong Connections to the Italian Mob

The developments have left many asking if part of the German economy is in the grip of the Mafia? A joint investigation by public broadcaster Westdeutscher Rundfunk, newspaper publisher Funke Mediengruppe and SPIEGEL has found strong connections between construction industry scammers and Italian organized crime. Investigative authorities in many German states share this assessment.

"For the Mafia, Germany is simultaneously a place for rest and for activity," says the president of the LKA for Baden-Württemburg in Stuttgart, Dieter Schneider. "It's a place where individuals who are wanted hide from the authorities, but also a place where crimes are planned and committed." The Italian criminals' goal, however, is to go as undetected as possible. According to Schneider, a bloodbath like the one that left six people dead in Duisburg in 2007 should be considered a "workplace accident." The clans main aim in Germany has been to enter the legal economy and the higher echelons of society.

Gabriele S. is accused of being deeply involved in illegal activity. His strawman businesses charged for work that was never done in exchange for a brokerage fee of 8 percent. According to the accusations, the money was transferred to the Sicilian and his accomplices in exchange for false labor, and then given back to the customers in cash, minus the criminals' share. The customers could then use the slush fund to pay their workers or bribe officials.

Causing 'Decline of the Building Sector'

The dimensions of this form of sham business -- using so-called proforma invoices -- are considerable. According to investigators' estimates, this activity costs the state around €1.5 billion ($1.2 billion) in lost taxes and approximately €2 billion in unpaid social security contributions. The labor union Ver.di pegs the annual damages at approximately €10 billion.

According to the report by the State Office of Criminal Investigation in Düsseldorf, the gangs operate like Italian Mafia clans. They copy Italian organizational structures in Germany and use intimidation and violence to secure a lucrative market.

According to officials, the consequences for the local economy are disastrous. Mafia activities, the report claims, are causing the "decline of a serious building sector in Germany." Honest businesspeople, they claim, cannot compete in the long term with the prices of the companies using illegal labor. And even though the problem has been known for a long time, there still isn't an effective system for controlling it.

German prosecutors generally don't seem to be well positioned for the fight against the Mafia. In a confidential overview of the situation, the Federal Criminal Police Office (BKA) criticized the German state for rarely sniffing out the Mafiosos' ill-begotten earnings. According to the investigators, the clans have made €123 million in the past 10 years from their illegal business alone. Less than €8 million of that has been confiscated -- the criminals kept the rest. According to the BKA, this represents "a large shortfall" and has impeded attempts to break Mafia structures.

The German authorities' powerlessness might explain why the Italian criminals feel so comfortable in Germany. According to the BKA overview, at least 460 suspected members of the Mafia live in Germany, most of them in the state of Baden-Wurttemberg, followed by North Rhine-Westphalia, Bavaria and Hesse.

While the Sicilian Cosa Nostra is seriously involved in the construction sector, members of the Camorrah in Germany prefer to trade in knock-off brand-name products. According to the BKA analysis, these fake products are created in factories in Naples and then stored in Germany. There, salesmen pick up the handbags, jigsaws and leather jackets and sell them on to customers -- which, in lieu of warranty cards or guarantees of authenticity, are heavily discounted. The resulting income then flows to the Camorrah clan's regional manager, minus a percentage for the German mafiosos.

"It's very difficult for the investigative authorities to penetrate the sealed structures," says Schneider, the Baden-Württemberg LKA head. Sebastian Fiedler of the Federation of German Police Officers claims the legal authorities' leniency is making the problem worse. "In Germany we're making it easy for the Mafia like almost nowhere else in the world." But he argues the clans are genuinely vulnerable at one place: Their money.

That's because the gangs move billions of euros. According to the calculations of the Italian research institute Demoskopik, the Calabrian 'Ndrangheta -- which has specialized in drug trafficking -- grosses €53 billion per year, in large part thanks to drugs. There are only two countries outside of Italy in which the organization is more active than in Germany: Australia and Colombia.

In Germany, the 'Ndrangheta clan also deals in Italian gourmet foods. They adulterate olive oil, fiddle with supposedly high-end ham and, similar to the groups operating in the construction sector, dodge taxes by selling their products on the black market. The Italian Farmers Association estimates the resulting annual losses at several billion euros.

These kinds of scams also often go hand in hand with legal businesses. According to the BKA, at least 300 pizzerias in German are controlled by the Italian Mafia. In addition to being well-suited for money-laundering operations, restaurants can also be used to help create ties with decision-makers. The result is that the Mafia has long since entered into bourgeois society.

"In these cases it's almost impossible for us to, at this point, uncover their criminal activities," says LKA head Schneider. The clans' proximity to the powerful and influential is sometimes shocking -- not even a multiple murder seems to get in the way.

One of the owners, for example, of Da Bruno -- the Duisburg restaurant in front of which the six mafiosos were shot in August 2007, as part of a feud with the 'Ndrangheta -- has been able to build up his business since the shooting. The businessman, in whose restaurant one of the victims had been ritually inducted into the Mafia immediately before his execution, now serves pizza and pasta to customers in new locations. His restaurants, people say, are doing well, in worthwhile places, too: by Lake Constance and in Baden-Baden.