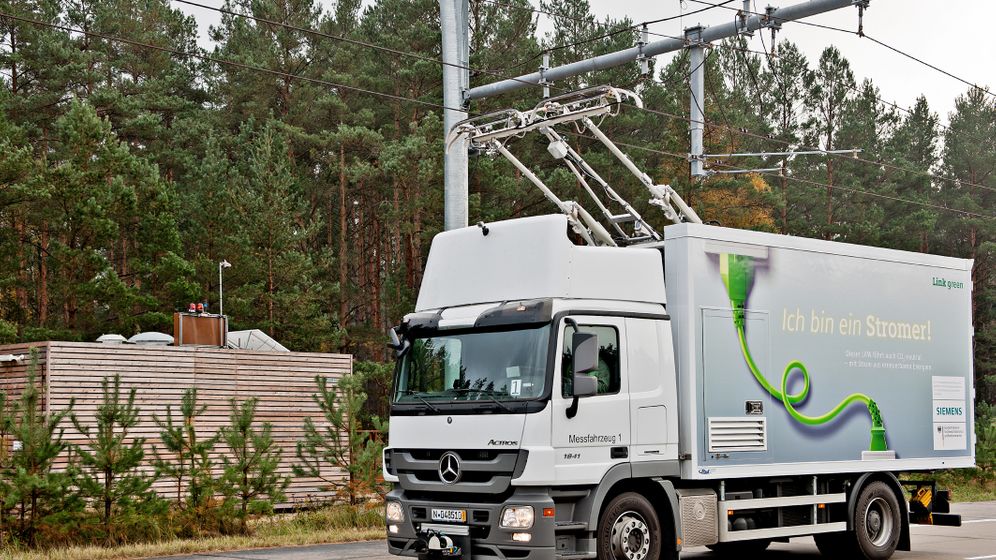 One of the most tenacious dumb ideas within the automotive industry is the claim that what electric cars really need to be successful are overhead power lines. The logic, at least, isn't difficult to follow: When it comes to power, cars need a lot of it, batteries store too little of it, and overhead lines can supply it.

Now Siemens, the German electrical and engineering giant as well as the country's leading rail-technology company, hopes to carry over the best features of rail technology to road traffic. The company has outfitted two heavy-duty Mercedes trucks with electric current collectors and a modified drivetrain capable of operating with two different systems. When an overhead line is available, these prototypes run on electricity alone, much like electric locomotives. When there's no overhead line, a diesel engine kicks in, powering a generator that continues to supply the electric system with power.

Germany's Ministry for the Environment (BMU) saw enough green potential in this hybrid truck to channel over €2 million ($2.5 million) in federal funding to the project. Siemens used the funds to help set up its first test track at an obsolete military airport north of Berlin. Overhead lines run above and along the roughly 1.5-kilometer (one-mile) track, supplying energy to the trucks whirring steadily along below.

Roland Edel, a chief technology officer in Siemens' Mobility and Logistics division who focuses on rail transportation, calls this a "flagship project." This whole idea, he says, is "pioneering" and "not thought up in some ivory tower."

But exactly what is so pioneering about this idea is unclear. Vehicles running on overhead lines proved their functionality long ago in the form of trolleybuses, some of which also have diesel engines. Siemens and the BMU would have trouble explaining the sense behind providing public funding for this research project. But the far more important question would be whether the large-scale wiring of highways with overhead lines makes environmental and economic sense.

As proof that it does, Siemens cites the German Advisory Council on the Environment, a body that advises the federal government and has already called the idea of trolley-style trucks a "promising option." The panel, chaired by Martin Faulstich, a professor at the Technical University of Munich, has also offered an initial cost estimate: Outfitting the major arteries of Germany's highway network (highways A1 through A9) with overhead lines, it says, would cost the government about €15 billion, or 1.5 times as much as the largest infrastructure project currently underway in Germany, a countrywide overhaul of highway overpasses.

On top of that, whereas a conventional truck cost €90,000, those equipped to use this system would cost twice as much. Converting just half of all the heavy-duty trucks currently licensed in Germany would require an additional €8 billion in investments.

Edel, the Siemens developer, prefers not to pass judgment on whether such investments can be justified economically. "In the end," he says, "we'll need to do a very precise cost-benefit analysis."

Such an analysis would vary from the one used for railway traffic. Deutsche Bahn (DB), Germany's national railway operator, uses overhead lines to power most of its passenger and freight trains, but it is in a rather different situation when it comes to using electricity in an economically sensible way. Indeed, DB Schenker, the DB subsidiary that is one of Europe's biggest freight truck operators, takes a skeptical view of the Siemens project. "At the moment, it's impossible to say whether such a system could be implemented in a reasonable, affordable way," says company spokeswoman Kerstin Eckstein.

Even Worse than the Current Option

In any case, electrifying Germany's roads is not going to bring about a green revolution in the transportation field. Since the majority of the electricity used to power trains comes from gas- and coal-fired power plants, the main environmental advantage of rail transport is not its use of electricity. Rather, the real advantages working in its favor are the large number of units that can be moved at once and the minimal amount of friction between steel wheels and steel rails. Together, these features make having even diesel-powered locomotives a comparatively good environmental option.

Among road vehicles, trucks' hauling capacity makes them the most efficient consumers of petroleum products. With one liter (0.25 US gallons) of diesel fuel, a truck can transport nearly one metric ton of payload 100 kilometers (62 miles) -- a performance about 70 times better than a car driving one person to the office in the morning. Indeed, a more reasonable transportation-policy move would be to get more people riding trains.

What's more, providing a truck with overhead lines by no means makes it more eco-friendly. A 40-ton truck uses about 30 liters of diesel to travel 100 kilometers, emitting less than 80 kilograms (175 pounds) of carbon dioxide. Running on electric power for the same distance, the truck would consume at least 200 kilowatt hours of electricity. According to data from Germany's Federal Environment Agency, generating that amount of electricity using Germany's current mix of power sources would create about 112 kilograms of carbon dioxide.

In other words, the German economy would pay tens of billions of euros to squander even more fossil fuels and cause even more environmental damage. 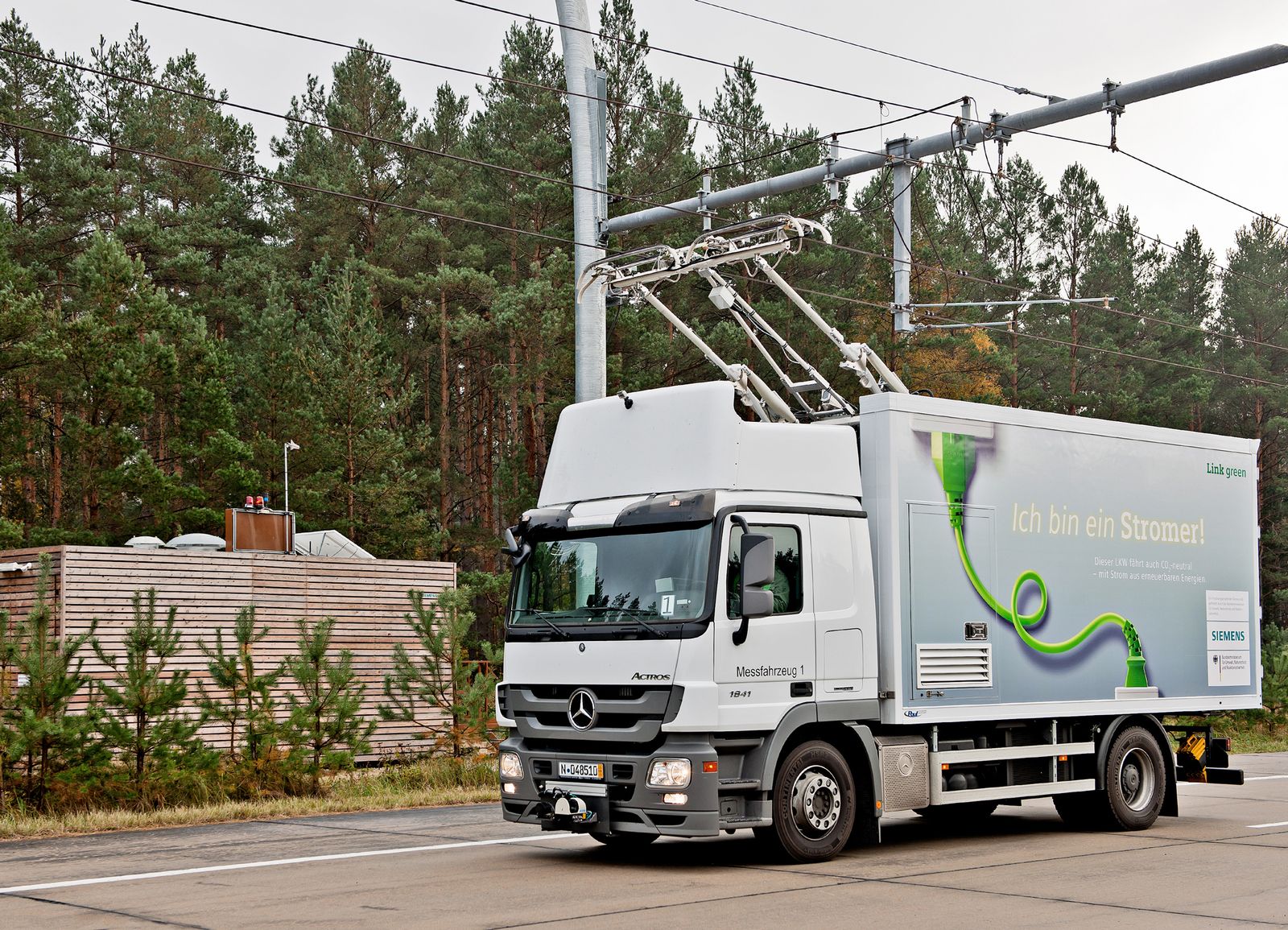 Siemens has outfitted two heavy-duty Mercedes trucks with electric current collectors and a modified drivetrain capable of operating with two different systems. When an overhead line is available, these prototypes run on electricity alone, much like electric locomotives. When there's no overhead line, a diesel engine kicks in, powering a generator that continues to supply the electric system with power.