The Lorelei Valley, one of the most storied swerves of the Rhine River, is the latest corner of the German landscape to lurch into controversy because of a planned bridge. Now that an architect has been selected for the project near the Lorelei Rock, an important conservation group has called the bridge an assault on the region -- foreshadowing a showdown between the bridge planners and UNESCO over the valley's World Heritage status. 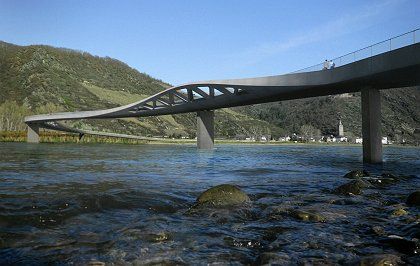 A computer-generated image of the winning Rhine bridge proposal.

Winning plans for the bridge by Dublin-based Heneghan Peng Architects were announced in late April and presented in Berlin on Tuesday. The president of the German chapter of ICOMOS, the International Council on Monuments and Sites, promptly released a statement condemning the project. The €40 million bridge would try to blend into the landscape with a sleek and flowing S-curve, but Michael Petzet, president of ICOMOS Deutschland, insisted this week that it would "further harm the already battered valley with additional traffic," and amount to an "assassination attempt" on the UNESCO-protected Upper Middle Rhine Valley.

The exchange of fire hints at the stakes involved. Politicians in Rhineland-Palatinate have long wanted a bridge between the towns of St. Goar and Sankt Goarshausen to cut down on long detours from one side of the state to another. But the site is thick with Geman lore and tradition. The Lorelei is a mythical river siren who sang from her rock and lured sailors to their doom in this shallow stretch of the Rhine, and the valley's landscape has enjoyed UNESCO World Heritage status since 2002.

The design by Heneghan Peng is deliberately low-key. Computer renderings show a modern bluish bridge winding over the river in a 150-meter S-curve. "The site will always be the star here," Shih-Fu Peng said when the project was announced in late April, according to the Irish Times. "The initial impact is transparence but as you move through the bridge you begin to understand its finesse and the nuances that make it almost invisible. Our design is about letting the valley slip through undisturbed."

A UNESCO committee will meet in Seville in June to determine whether the plans will threaten the World Heritage status of the Upper Middle Rhine Valley. "It is intimately associated with history and legend," reads a description of the valley on the UNESCO Web site, "and for centuries has exercised a powerful influence on writers, artists and composers," including Richard Wagner in his famous Ring cycle.

A similar debate over a bridge in Dresden has simmered for years because its construction would threaten the Elbe River Valley's UNESCO World Heritage status. The worry for the Rhine bridge planners is that ICOMOS advises UNESCO on threats to landscapes and monuments. The planners were hoping to meet UNESCO's criteria with the Peng design and avoid a showdown like the one in Dresden. But the current right now seems to be running against them.

An alternative project, as in Dresden, is a tunnel under the river -- which in the Rhine Valley's case would cost about €30 million more.