The inconspicuous object weighs as little as three bars of chocolate and is no bigger than a very thin paperback. Though small, it is about to revolutionize the way Germans read.

It's called Kindle, and it's marketed by the American online retail giant Amazon. You can use it to purchase and download all kinds of texts using a free UMTS wireless connection. Books purchased in this way are call e-books (short for electronic). This means of obtaining reading material is becoming more and more popular in the US, but some see it as a threat to the world of printed material. 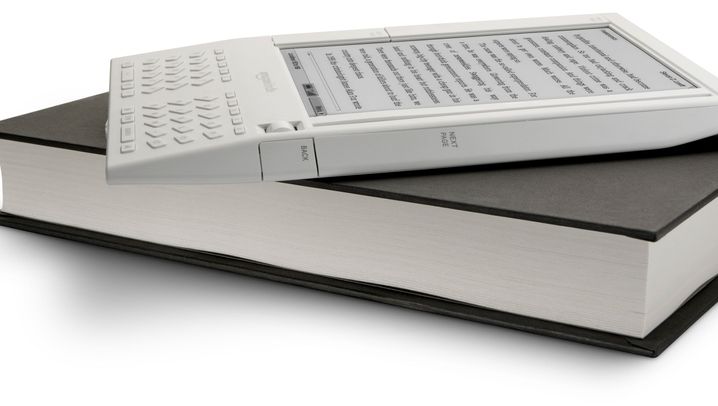 Photo Gallery: The Hard Road for E-Books in Germany

In recent years, there's been a lot of talk about this new technology in Germany, but it has yet to gain widespread popularity. But Amazon plans to change that. Beginning on Oct. 19, right after the Frankfurt Book Fair comes to a close, it will flood the German market will the gadgets. In the US, they cost about $279 (€187). The German buyer will pay €250 ($374), including tax, shipping and customs duties.

Although prices vary greatly in different regions with different laws, there are 100 countries across the world in which customers can use the Kindle to purchase and download books from Amazon at the click of a button. Over the past few weeks, 104 out of the 112 books on the New York Times bestseller list have been made available in the US in the e-book format for $9.99.

Of course, this includes "The Lost Symbol," the latest thriller by Dan Brown, a somewhat long-winded thriller involving the secret power and cryptic symbols of the Freemasons. The book hit the shelves in Germany on Wednesday, just in time for the Frankfurt Book Fair -- and, incidentally, just after the arrival of the futuristic thriller "Limit," written by Frank Schätzing, Brown's German-language competitor.

A new gadget, a market with a very promising future and two guaranteed bestsellers? You'd think it sounds like the perfect conditions for introducing a new media device. But will it happen? No.

While people in the US can purchase Dan Brown's book online -- and in the blink of an eye -- for less than $10 dollars, Germans have to fork over €26 ($39) for it -- and only in bookstores. Although publishers have deemed it worthy of being printed in a first run of 1.2 million copies, they don't plan to offer it as an e-book. Even Schätzing's novel, which will have a first run of 400,000 printed copies, will only be made available online next year.

The German book industry is a stranger to this new digital world. According to the estimates of Goldmedia, 10,000 readers have already been sold in Germany. But, according to the GfK Group, a leading market-research company, in the first six months of 2009, only 65,000 e-books were sold, excluding specialist works.

Unlike in America, the cost of downloading an e-book in Germany is also frighteningly high. The Kindle's main competitor, the Sony Reader, has been available in German bookshops for a while now for about €250. But the Sony device cannot directly download e-books from the Web. And since e-books are just as expensive as their cheapest printed versions in Germany, they are still fairly expensive when compared to the price of the required hardware.

In fact, the price of an e-book can only go down once the paperback edition has hit the market, which usually takes about two years. Ironically, even Schätzing's "Limit" -- a science fiction novel that celebrates the technology of the future -- has not been able to get past these policies of blockade.

The novel takes place in 2025. In it, the distance between the moon and the Earth has been shortened by the establishment of a kind of space elevator. The moon has also become much more worth visiting because it is rich in the isotope Helium-3. Once transported down to the Earth, the novel's protagonists hope, the isotope will completely solve the planet's serious energy shortage.

Even in 2025, humanity has still not done away with its avaricious nature -- and its indefatigable scientific curiosity. The Americans and the Chinese are fighting over who controls the moon and, with it, the entire world. The novel is a little bit too over-the-top and wordy, but it makes for an intensely informative and exciting read and is a successful venture in combining didactic fact and fiction.

At 1,328 pages and weighing in at a hefty 1.3 kilograms (2.9 pounds), "Limit" would be an ideal candidate for a much more manageable e-book. But its publishers argue that the cost of the software that converts printed works into e-book format is too high. But that sounds like an unlikely excuse. For one thing, all of the publishing houses owned by the Holtzbrinck Publishing Group, including Kiepenheuer & Witsch, the publisher of "Limit," have access to what the German publisher Helge Malchow calls "an electronic warehouse," where paper books are transformed into e-books. And, secondly, the fact is that, in the long term, these sorts of economic arguments just don't make economic sense. There is no way of arguing around the fact that printed books are just more expensive -- owing, among other things, to the high price of the paper, the printing process and handling books returned to stores.

In truth, this has much more to do with German laws that mandate fixed prices for printed works. But what were supposedly implemented to protect objects of culture value and small bookstores have also helped suppress competition. The fear is that, when an e-book version of a work comes out, customers will be much more inclined to choose, buy and download it -- a cheaper and much more efficient option given its relatively modest overhead requirements -- than leave the house. As a result, the e-book will gradually render these small businesses obsolete.

As many see it, the long farewell to Johannes Gutenberg, the German who invented the printing press, has begun in the United States. "It was an unbelievably successful technology," says Jeff Bezos, Amazon's founder and CEO. "But now is the time for a change."

For every book sold on Amazon.com that is available in both printed and digital versions, half are bought as e-books. And experts have estimated that, by 2012, the US market for e-book reading devices will rise from its current one million to 12 million.

Up to now, almost all the people buying the e-book readers appear to be "professional readers," meaning people like publishers or businessmen, whose jobs require them to work through reams of text. According to a survey taken recently for the Frankfurt Book Fair, only one in 12 Germans has a clear idea about what an e-book is, and seven out of 10 of them would prefer a printed version over a digital one.

Perhaps what is lurking behind the German market's scepticism is the memory of the crisis surrounding MP3 players and music piracy that had it up in arms a decade ago. What really disturbed them was the fact that illegal copies of music files would race across the Web with virus-like speed before companies had had much time to sell them legally.

In the United States, at least, it seems that publishers have been trying to learn from the music industry's biggest disaster. They respond quickly to new technology and offer affordable alternatives to printed books and illegal digital versions of them available on the Web. Nevertheless, the Internet pirates still pose a threat. Take, for example, Dan Brown's latest novel, "The Lost Symbol." The novel was available as a free illegal download soon after it hit the stores in Washington.

All this is not to say that the printed book will not somehow live on. No, it will remain among us as the lavish coffee-table book, a collector's item for booklovers made out of expensive paper and kept in pristine condition, and -- most of all -- as a relic of a bygone era in our collective memory.

7 Bilder Photo Gallery: The Hard Road for E-Books in Germany 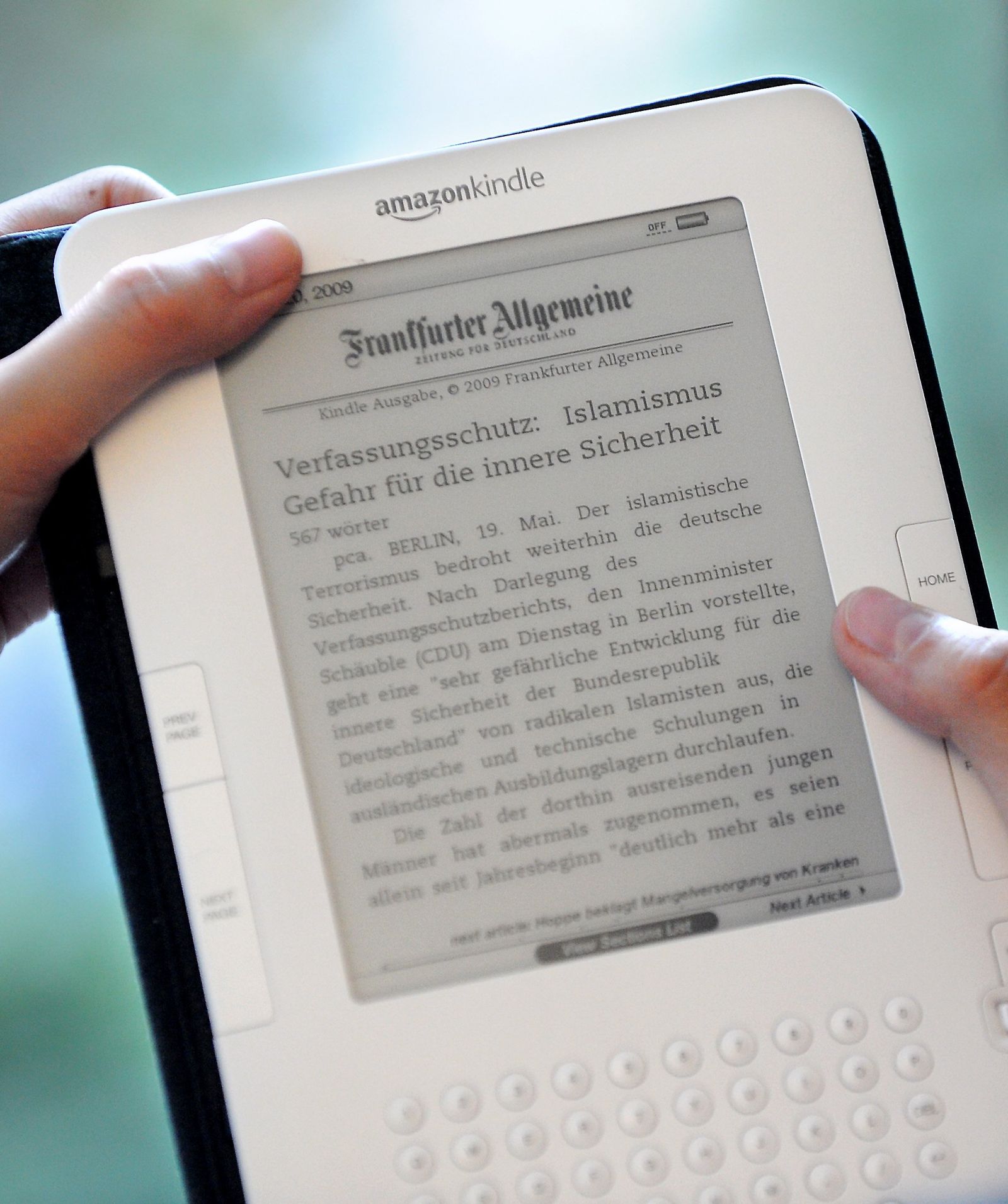 The German book industry is a stranger to this new digital world. According to the estimates of Goldmedia, 10,000 readers have already been sold in Germany. But, according to the GfK Group, a leading market-research company, in the first six months of 2009, only 65,000 e-books were sold, excluding specialist works.