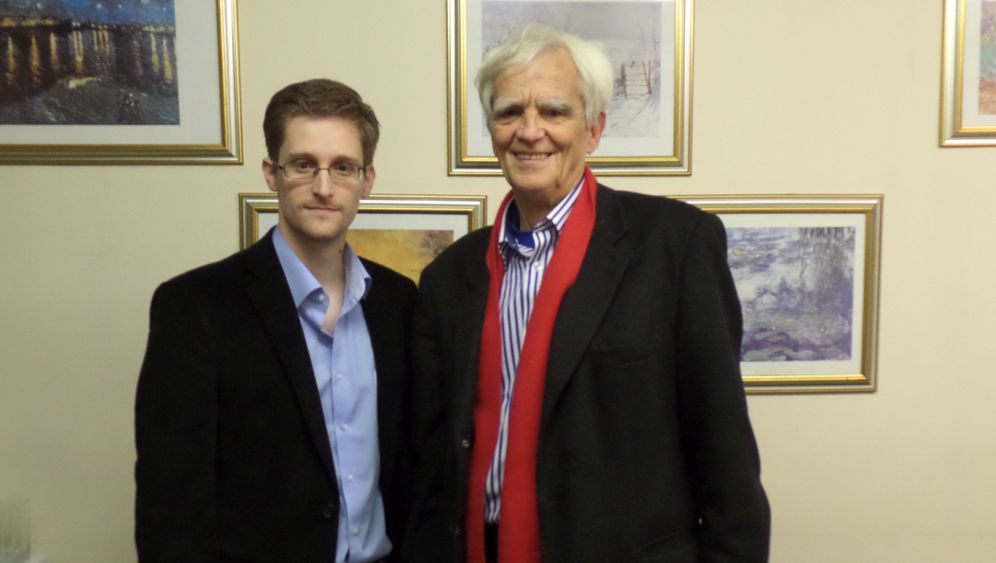 Edward Snowden has said he is willing to cooperate with investigations into the US spying scandal -- but he will not testify on Russian soil. The former contractor for the United States' National Security Agency (NSA) wrote down his intentions in a letter handed to German Green Party lawmaker Hans-Christian Ströbele after the pair met in Moscow, where Snowden has been granted temporary asylum.

In the letter, which Ströbele also signed, Snowden said he would "cooperate in the responsible finding of fact" with regard to the "truth and authenticity" of the documents he has leaked.

The 30-year-old former contractor for the NSA hit out at Washington's treatment of him, criticizing what he described as a "severe and sustained campaign of persecution" that forced him from his family and home. He also argued that the benefits of his actions are becoming increasingly clear in the form of "new laws and policies to address formerly concealed abuses of the public trust."

Snowden met with Ströbele in secret on Thursday for almost three hours, with journalists John Goetz, from public German broadcaster ARD, and Georg Mascolo, the former editor-in-chief of SPIEGEL, also in attendance. Footage of the meeting was broadcast by ARD on Thursday night.

'Why Not Talk to Him Personally?'

At a press conference on Friday, Ströbele revealed the meeting had been organized for months. "You all know that since June, the entire world has been talking about Edward Snowden," he said. "Then I thought, why not talk to him personally?"

"I therefore have not had a holiday because I have been waiting with a packed bag," Ströbele added.

Snowden is holed up in Moscow after being granted asylum by the Russian authorities in June. He fled the US after leaking the documents, which have repeatedly embarrassed Washington and other Western governments by revealing the extent of their intelligence gathering -- including reports that the NSA was bugging German Chancellor Angela Merkel's own mobile phone. The US has issued a warrant for Snowden's arrest.

The main topic of Thursday's meeting was the conditions under which Snowden would be able to testify to a public prosecutor or an investigating committee of Germany's lower house of parliament, the Bundestag. According to Ströbele, Snowden raised the possibility of making a statement in front of an inquiry.

"He has clearly indicated that he knows a lot," Ströbele said Thursday, adding that Snowden is "ready to come to Germany and to testify there." The circumstances of any such visit would still need to be clarified.

According to the veteran Green Party politician, who represents Berlin's Friedrichshain-Kreuzberg district, it would theoretically be possible to assure Snowden safe passage to Berlin, or to question him in Moscow. Snowden himself has indicated he has "interest in principal", but also referred to his "complicated legal situation," ARD reported.

Snowden's lawyer, however, has said that he cannot travel abroad to testify. Anatoly Kucherena told Russian news agency Interfax that his client would not testify about alleged spying on Merkel. Snowden would remain in Russia -- he could not travel abroad as he would then lose his temporary asylum status. "In addition, according to the existing agreements, he cannot disclose any classified information as long as he is in Russia," Kucherena told Interfax.

Ströbele confirmed this on Friday at the press conference, although he said Snowden "can see himself coming to Germany." In order for that to happen, though, he would need to have assurances that he could safely stay in Germany or a comparable country afterwards. One option would be for the German government to provide him safe passage, "if that were clear, then he would be prepared to come," said Ströbele.

'Snowden Made a Good Impression'

Ströbele will report on his conversation with Snowden at a special session of the Parliamentary Control Panel, the body in Germany's parliament charged with keeping tabs on the country's intelligence agencies. "Snowden is alive and well, and made a good impression," Ströbele told ARD on Thursday. "He has a mission, an urge to communicate. He wants to establish a rightful state of affairs again."

Journalist Mascolo, meanwhile, said that Snowden is satisfied with the direction the debate on US surveillance activities has taken since his leaks. According to Mascolo, the former NSA contractor is guarded but can speak freely, and he views the conversation with Snowden as the "start of a dialogue."

The German Justice Ministry confirmed reports that the US government has already placed an extradition request for Snowden as a precautionary step. However, according to a legal opinion prepared by the Bundestag Research Department at the request of the Left Party, Germany could offer Snowden safe passage.

According to the ARD report, Snowden would be safe from deportation if he were provided with a residence permit. Since the withdrawal of his US passport, Snowden is officially stateless. A residence permit can be issued on the basis of international law or on humanitarian grounds as well as for the "protection of political interests."

The German government has at least signaled its willingness to talk with Snowden. Interior Minister Hans-Peter Friedrich, a member of the Christian Social Union, the Bavarian sister party to Merkel's Christian Democrats, said on Friday: "If Mr. Snowden is ready to talk with German authorities, we will find possibilities to make this conversation possible." He did not specify who exactly would lead such a conversation.

"If the message is that Mr. Snowden will give us information, then we will willingly receive that," Friedrich said. "Every new insight, everything that gives us information and facts, is good." The government, he said, is grateful for all information, "whether it is through Mr. Ströbele or letters or whatever." The demonstrative willingness to talk is remarkable, as up until now, Berlin's attitude had been that questioning Snowden was not an option.

The whistleblower was granted temporary asylum by Moscow in the summer, thereby offering him protection from prosecution by the US, which has issued arrest warrants and threatened to charge Snowden with treason.

Snowden has been in Russia since Jun. 23 after leaving Hong Kong by plane and being stranded at a Moscow airport. He was eventually provided temporary asylum in Russia on Aug. 1. The US government is demanding his extradition to face espionage charges.

His lawyer reports that his funds are running out, and in response, Snowden supporters set up a fundraising website which has already collected $49,000 (€35,600).