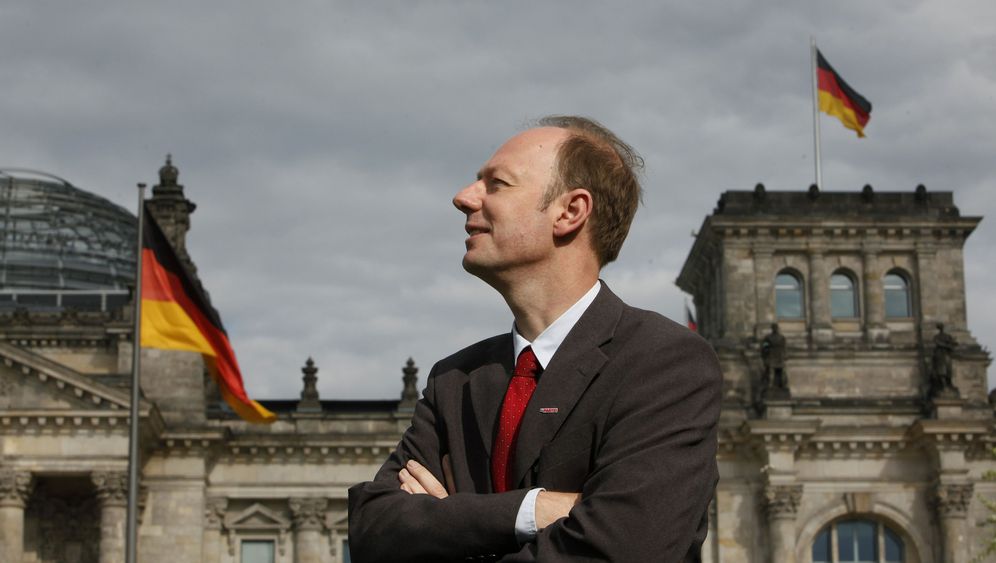 There's only one way Chancellor Angela Merkel, enjoying a huge lead in opinion polls, can still lose the general election on September 22: She'd have to hire the campaign team of her hapless Social Democratic rival Peer Steinbrück, says the leader of Die Partei ("The Party"), a small, irreverent political party that is vowing to liven up what is shaping up to become the dullest election in a generation.

In an interview with SPIEGEL ONLINE, party chairman Martin Sonneborn, 48, co-publisher of Titanic, a satirical magazine, said he would put Merkel on trial in a cage if he came to power, for her supposed contribution to the fall of the Berlin Wall. It's an issue close to his heart because Die Partei, founded in 2004, once campaigned on a platform of rebuilding the Wall. "We've since dropped that particular policy from our manifesto, but it remains a popular one," said Sonneborn.

Last Friday, Die Partei was officially approved by the agency responsible for overseeing German federal elections as one of 38 parties eligible to run. Its greatest electoral success to date came in May when one of its members was voted onto the council of the northern city of Lübeck. That was its first taste of power since a Left Party council member in the western city of Leverkusen defected to Die Partei.

No Debate, And None on The Horizon

"We're a party that wants to gain power just like any other party, but we're trying to achieve this in part with satirical methods," says Sonneborn. Die Partei encompasses a fully-fledged organization with regional branches, a treasurer and no less than eight chancellor candidates. It even has a uniform for its members -- "gray C&A suits, off the rack for €49."

The election campaign may yet take off, of course, but so far it has been sorely lacking both in entertainment value and hard-hitting political discourse. There are no real battlegrounds, and none on the horizon, unless the NSA scandal blows up in Merkel's face.

The shrewd chancellor has nudged her conservative Christian Democratic Union to the left to snatch away many of the SPD's pet policies. And the main parties broadly agree on how to tackle the euro crisis. She's also well ahead of Steinbrück in terms of personal popularity. Germans regard her as a safe pair of hands, and they appreciate that she has steered Germany through the euro crisis without imposing too much of a financial burden on them.

Her CDU is a whopping 16 points ahead of the SPD in the most recent voter survey. She may have trouble forming a stable coalition, however. In fact, the make-up of her government is at present the only real question mark, because her current partner, the pro-business Free Democratic Party, has dramatically lost support since the last election in 2009. Still, few people seriously believe Merkel will fail to win her third term.

'She Stands For Even Less Than We Do'

Asked to explain the secret of her success, given the near total lack of major policies or reforms in her current term, her penchant for radical U-turns, her often-criticized lack of leadership or vision, and recent revelations that she had been a secretary for "Agitation and Propaganda" in communist East Germany's FDJ youth organsation, Sonneborn said: "The lady stands for even less than we do. And that's saying something."

Besides, not even Steinbrück's own party seems to think he has a chance. The only real highlight of the campaign so far came in June when Steinbrück, known as a thick-skinned, straight-talking political warhorse, came close to tears at an SPD conference after his wife Gertrud told everyone to stop picking on him. The media have been sharply critical of the gaffe-prone candidate, whose most memorable line so far has been to demand better pay for chancellors.

So if you want serious controversy, you have to turn to Die Partei, it seems. Sonneborn is keen to deliver.

"Frau Merkel is one of the dangerous gang of three East Germans who are responsible for the opening of the Wall. Their masterplan was to take over the country and transfer all our money to the East," said Sonneborn. The other two are President Joachim Gauck, and Matthias Sammer, the sports director of FC Bayern Munich football club. Sonneborn did not elaborate on the charges. Instead, he outlined some other campaign pledges:

• To build a wall around Germany to tackle globalization, financial market turmoil and the euro crisis.

• To limit management pay to 25,000 times an ordinary worker's pay.

• To use the controversial mining method of hydraulic fracturing or "fracking" on Peter Altmaier, Germany's heavyset environment minister, to release the "tremendous energy resources" within him.

• To further complicate the German tax system so that large companies can no longer find money-saving loopholes.

• To follow the Greek example and shut down public broadcasters like ARD and ZDF and make them repay the license fees and apologize for their output.

• To raise €5 million through crowdfunding to finance the controlled detonation of Berlin's baroque city palace once it has been rebuilt. And to erect a grand, presumably communist-style "Palace of Die Partei" in its place, or a large swimming pool. "We'd have to run an ideas competition for that," Sonneborn explained.

• To lower the school leaving age to 10 in order to solve the demographic problem of an ageing society.

• To lower the voting age to boost electoral support for Die Partei.

But Die Partei won't make its full manifesto known until after the election, says Sonneborn. He admits that some of the measures would be painful, hinting vaguely at plans for forced nationalization and expropriating banks as well as a radical redistribution of wealth.

"You can only confront multinationals and banks from a position of strength," says Sonneborn, who adheres to an ideology he desribes as "humanistic fascism" or "dictatorship with a human face." Germany's political system, he says rather ominously, needs to be "modified."

He dismissed the pro-Internet Pirate Party and the new anti-euro party Alternative für Deutschland as lacking seriousness and gravitas, pointing out that Die Partei is far more established, having been founded nine years ago.

"This election campaign has been so boring because we haven't been a part of it yet," said Sonneborn. "We're going to change that."