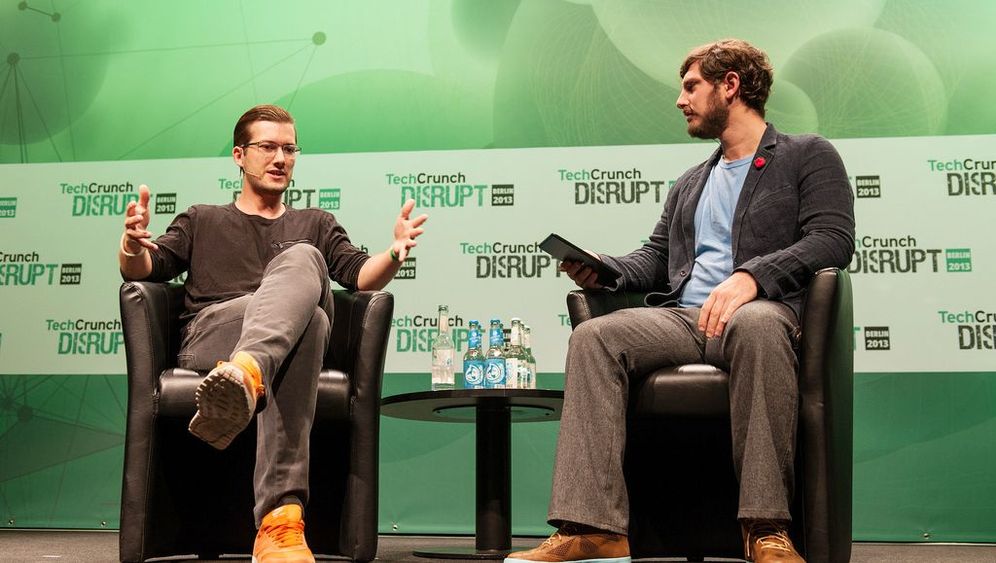 Of the 1,800 people who gathered at the suitably grungy Arena Berlin venue alongside the Spree River, most were speaking English rather than German, albeit with a wide variety of accents. The technology blog TechCrunch had brought its biggest event, Disrupt, to Europe for the first time -- and had chosen Berlin to host it over the likes of London or Paris.

For those working in the world of tech startups, it was a must-see event. Be there and be square -- entrepreneurs, venture capitalists, marketing experts, journalists and assorted geeks, nerds and techies.

Berlin's startup community was under the spotlight, and it wheeled out its only genuine global A-lister for the occasion.

Alexander Ljung founded SoundCloud in the German capital in August 2007 along with his fellow Swede, Eric Wahlforss. An online platform allowing users to upload and share sound files -- like a YouTube for audio -- SoundCloud has been the biggest success story to emerge from the growth of Berlin as a global startup hub and the accompanying media hype.

Ljung took to the stage on Oct. 29, the final day of Disrupt, as one of the conference's biggest draws. And he came bearing good news: SoundCloud had reached 250 million monthly users, an astonishing increase of 50 million over the previous five months.

As always, Ljung came across as laid back, yet passionate, the epitome of the 'Berlin geek chic' image which has developed in recent years. But behind his casual ease there lies a determined businessman.

Unlike most other emerging tech companies from Berlin, SoundCloud is going global, fast. In addition to its headquarters in the German capital, the company has offices in San Francisco -- spiritual home of the startup together with the nearby Silicon Valley -- as well as New York, London and Sofia. Up on stage, Ljung proudly talked of how "in a given hour, we will reach almost every given country in the world" and that, for the first time, sounds had been recorded and shared on SoundCloud in space.

But is this success proof that a young company founded in Berlin can emerge onto the global stage and potentially become the next Facebook, Google or Twitter? Or is SoundCloud the exception that proves the rule that entrepreneurs would be better off in London, New York or Silicon Valley?

There are other tech startups which have emerged from Berlin to have a significant international presence, like games company Wooga and science research platform ResearchGate, but none of them have packed the same punch.

That punch is partly thanks to Marc Strigel, SoundCloud's chief operating officer. He joined in November 2011, having previously been PayPal's director of marketplaces and payment innovation in Germany, Austria and Switzerland. Other previous companies include media giants RTL and Bertelsmann. But despite his corporate background, he appears completely at ease in SoundCloud's headquarters, in Berlin's upmarket Prenzlauer Berg district. The distinctive orange favored by the company is much in evidence on the fifth-floor office, including in the beanbags being used by young computer programmers utterly focused on their laptops.

They are a little short of space as a result of renovation work, Strigel explains. It's no surprise -- it's hard to keep up when a company is growing its workforce as fast as SoundCloud. It currently has more than 200 employees worldwide, with around 140 of those in Berlin representing 31 different nationalities. So it's not difficult to believe Strigel when he declares that "global is our DNA." SoundCloud's product, he says, has been designed at a global level since the beginning.

"It works for creators across the world, and we don't go down the route of unlocking country by country."

That also extends the staff. "Alex and Eric realized from the start," Strigel adds, "that building a great startup is about getting the best talent together, and the best talent doesn't necessarily live in Berlin."

That means actively recruiting outside of Germany and relocating new employees, a "deliberate effort to make sure that we get the best talent from across the world."

But while attracting bright, young and unattached tech whizzkids to Berlin -- a notorious party town -- is relatively easy, the city still lacks the gravitas of somewhere like San Francisco, which is vital for bringing in the experienced top tier of startup management. It's these senior people that SoundCloud now needs. And that means needing to look beyond Berlin.

Yet he feels that Berlin could do better when it comes to attracting senior management. Established communities of British and American families in the southwest of the city -- and the associated schools -- are a key part of that, he believes. "Both the authorities and startups could do much more in promoting Berlin for families, for these world-class talents we definitely need."

'A Bit More Punk and Tech'

Nonetheless, the city retains a freshness that is missing in the more established tech scenes. It's the mixture of counter-culture and a commitment to technology, "a bit more punk and tech," Strigel says, which shines through when compared to the more money-dominated Silicon Valley.

What Berlin needs to do to catch up, he adds, is copy the Valley in terms of the collaboration between companies who, on the surface, are clear competitors: "The scene and the industry is far too small at the moment … We should try to work together to achieve the common goal of helping to digitize the business world here in Germany."

Hearing Ljung up on stage asserting that "democratization is badass and accessibility is badass" is a reminder that Berlin has its own accent when it comes to startups. Yet even as SoundCloud plans to focus on mobile technology in a bid to maintain the company's astonishing user growth, the lack of similar success stories emerging from Germany is, for some, cause for concern.

Not for Ljung, though. He believes Berlin has an edge to it that makes it different. The potential exists already. "It really comes down to the startups here, actually. It's their responsibility to showcase themselves more in the world."