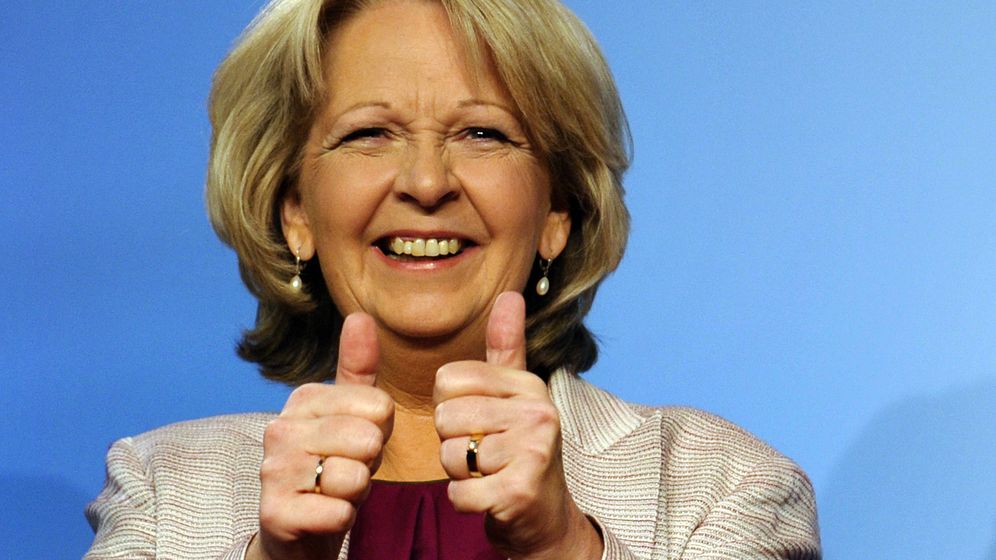 It has been a long time since the working class in Germany's erstwhile industrial heartland has had this much to cheer about. On Saturday, Borussia Dortmund, a football team adored by many in the once-powerful coal and steel Ruhr Valley region, crushed effete Bayern Munich in the German league championship game.

And then on Sunday, the center-left Social Democrats (SPD), once the heart and soul of politics in North Rhine-Westphalia, roared back from a half-decade-long funk to take almost 40 percent of the vote in the state election. Suddenly, it's just like old times in the state -- all that's missing is the smoke billowing out of the steel factory chimneys.

For the SPD and the Greens, Sunday's election is nothing short of a fairy tale. And it is a success with a clear winner: Hannelore Kraft, the SPD governor of the state who has now been given the overwhelmingly clear mandate she lacked following the last state elections in 2010. The pair of center-left parties governed Germany under Chancellor Gerhard Schröder from 1998 to 2005, but an increasingly crowded party landscape had made a repeat of the coalition seem unlikely. Now, Kraft has shown that it is still possible and SPD and Green Party leaders in Berlin are seeking to bask in her glow.

Kraft has no choice but to accept the adulation; the victory is very clearly hers and hers alone. It shows once again just how important people and personalities have become in German politics. German voters have become unpredictable, with many deciding which party they will support shortly before heading to the ballot box, often swayed by emotion and sentiment. Furthermore, because the political platforms of Germany's two largest parties, the CDU and SPD, are so similar, personality has become crucial. Hannelore Kraft is hardly a political overachiever, but she exudes rationality and reliability. Her opponent, Norbert Röttgen, looked pale by comparison -- and he was trounced at the ballot box as a result.

Lying in the Dust

The very best news for the SPD and the Greens from Sunday, however, is that it showed that Merkel's CDU can be defeated. Self confidence among Germany's Social Democrats has been in short supply as the party suffered through years of losing elections and members. But the North Rhine-Westphalia vote is the third time in recent months that the SPD and Greens have joined forces to triumph over the center-right. Merkel has lost some of her shine as a result and Röttgen, once seen as the CDU's crown prince, has been left lying in the dust.

On Sunday evening, Röttgen fell on his sword, relinquishing his position as head of the CDU's North Rhine-Westphalia chapter. He is hoping the move will be enough to save his job as head of the Environment Ministry in Berlin -- and to protect his boss Merkel from excessive criticism resulting from the catastrophic vote tally. But such a clear loss can't help but reflect poorly on the chancellor as well.

After all, Röttgen -- though he led the campaign in North Rhine-Westphalia himself -- is Merkel's political creation. He is one of her most important ministers and she has promoted him throughout his career, even pleading with him to remain in politics instead of switching to a potentially lucrative career in industry. Recently, though, her support has waned as she has realized that, while he is intelligent, his political abilities are limited. Still, more than almost anyone else, he is a Merkel protégé. As such, his defeat is hers as well.

Now Merkel's conservatives have lost much of their strength, suffering several crucial losses in state votes over the last two years. Even the Christian Social Union, the powerful Bavarian sister party to the CDU, may have trouble defeating the SPD in the next state election there in 2013. That is sure to make Merkel's team nervous -- and prone to bickering and bad politics.

Lindner Stirs Up the FDP

Even worse, Merkel's coalition partner on the national level, the business-friendly Free Democrats, also received a much needed boost on Sunday. After months of abysmal poll ratings and a series of painful election showings, the FDP has now received over 8 percent of the vote in the last two state elections. In North Rhine-Westphalia, they were led by Christian Lindner, the party's new star. And their newfound confidence could also complicate Merkel's life in Berlin.

The FDP has often responded to electoral success with arrogance, and they are sure to badger Merkel and flirt with other parties ahead of next year's nationwide vote. This could make it difficult for Merkel to find potential coalition partners next year, putting her position as chancellor in danger.

But does that mean that all is well in the center-left camp of the SPD and the Greens? Not entirely. When handed similar advantages in the past, both parties have stumbled repeatedly. It's likely that the SPD and Greens will face as many difficulties as Merkel's coalition in the coming months.

Just how the SPD will position itself regarding the euro crisis also remains uncertain. While Merkel can still insist that voters have trusted her through the crisis, the SPD lacks a clear course. Merkel stands for the fiscal pact and policies of European economization. In short, she is protecting Germany's money.

But the SPD finds itself with a dilemma. If it rejects the fiscal pact, and thus austerity policies in general, the party would be handing Merkel a gift for next year's campaign. She could easily portray the SPD as a party that cannot handle money. But if they go along with Merkel's strategy out of a sense of national duty, they will fail to adequately differentiate themselves from the chancellor. There is no solution to the problem in sight, aside from a new, demoralizing battle over the party's course -- an approach that the SPD is known to excel at.

In the midst of this confusion stands the SPD's troika: party leader Sigmar Gabriel, parliamentary group leader Frank-Walter Steinmeier and former finance minister Peer Steinbrück. But the party's real star is now a woman: Hannelore Kraft has shown the three men how to win an election. She is more popular within the party than all three aspiring chancellors. But she has said she is uninterested in becoming the SPD's candidate for chancellor. And that could prove to be a difficult problem for the party to overcome. 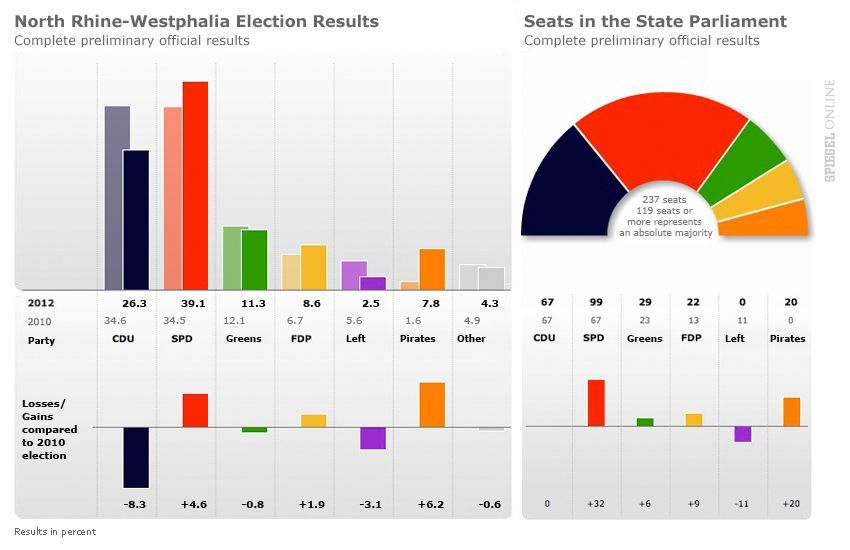