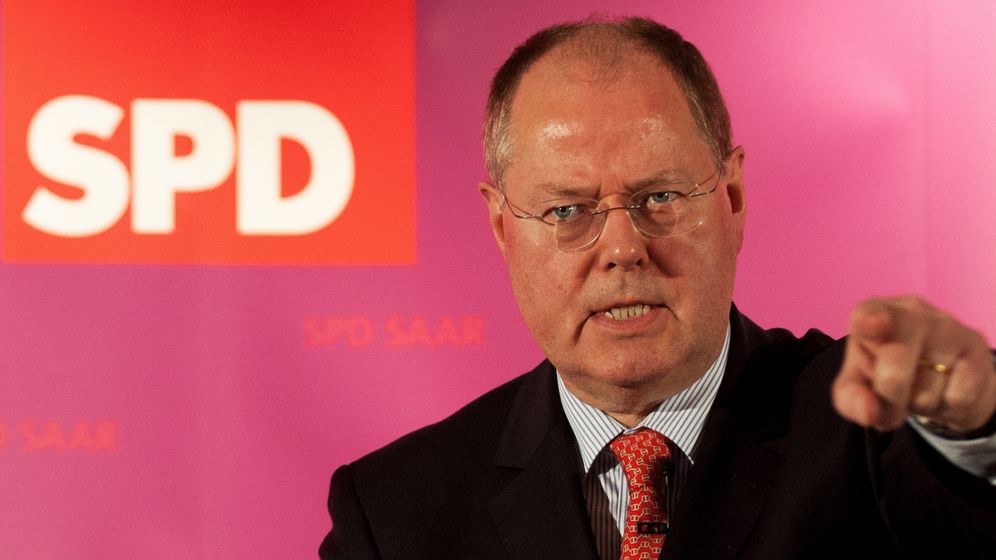 "Are you really going to buy a DVD player because it now costs £39.10 instead of £39.90?" then-German Finance Minister Peer Steinbrück wanted to know in a December 2008 interview with Newsweek, in reference to then-British Prime Minister Gordon Brown's decision to cut VAT from 17.5 percent to 15 percent as a way of stimulating the economy. "All this will do is raise Britain's debt to a level that will take a whole generation to work off."

The comment was made just weeks after the global financial crisis began ravaging the world economy in the wake of the Lehman Brothers bankruptcy in the fall of 2008. And it was a signature moment for the often brash Steinbrück.

Now, with German general elections just a year away, he is aiming even higher. On Friday, Sigmar Gabriel, the head of Germany's Social Democratic Party (SPD), announced that he will propose Steinbrück as the party's candidate to unseat Chancellor Angela Merkel -- a woman whom he was instrumental in helping become one of the few significant world leaders not to lose their jobs in the wake of the financial crisis.

"I accept this challenge," Steinbrück told reporters during a press conference at SPD headquarters in Berlin on Friday. "We want to replace the current government. Our goal is a coalition government with the Green Party."

The choice of Steinbrück, analysts say, is a good one. For months, the SPD had been refraining from announcing which of a trio of leaders would ultimately take the reins. Lately, though, it had become increasingly apparent that SPD leader Sigmar Gabriel lacked popularity among German voters, and that parliamentary floor leader Frank-Walter Steinmeier was lukewarm at the prospect of a renewed candidacy after having led the party to its worst-ever postwar result in the 2009 general elections.

Steinbrück, though, is widely credited with having shown a steady hand during the darkest moments of the crisis in 2008 and 2009. And he has also given every indication recently that he is up for the challenge. "Steinbrück is the most dangerous candidate for Merkel because he is attractive to centrist voters," political analyst Gero Neugebauer told Reuters on Friday. Gerd Langguth, another well-respected commentator on German politics, added: "He would be the most capable of poaching voters from the conservative camp."

The 65-year-old is also something of a known quantity overseas. In the initial months of the crisis, Steinbrück was never far away from the headlines -- and didn't mince words. "The US will lose its status as the superpower of the world financial system. The world will become multi-polar," Steinbrück said in one much-cited comment made before the Bundestag, Germany's parliament, in September 2008. He also coined the phrase "crass-Keynesianism" as part of his critique of massive spending packages aimed at softening the effects of the crisis.

"When I ask about the origins of the crisis, economists I respect tell me it is the credit-financed growth of recent years and decades," he said in the Newsweek interview. "Isn't this the same mistake everyone is suddenly making again under all the public pressure? It's the yearning for the Great Rescue Plan. It doesn't exist. It doesn't exist."

Indeed, it was comments such as these that led Steinbrück into a highly public press battle with Paul Krugman, the Nobel laureate economist and New York Times columnist. An avowed adherent to Keynes' theory that government spending creates growth, Krugman wrote in December 2008 -- in a direct attack on Steinbrück -- that the primary "multiplier effect" that government spending programs were having was that of "multiplying the impact of the current German government's boneheadedness."

Still, Germany managed to avoid most of the major pitfalls of the financial crisis. While the country's economy did enter a brief recession immediately after the Lehman Brothers crash, unemployment continued to shrink throughout the crisis, and the labor market remains strong. Sovereign debt rose, but not significantly. In fact, many in Germany still give Steinbrück a significant share of the credit for preventing greater economic pain. Financial experts also credit his skill at getting German banks to pony up for the €50 billion ($65 billion) bailout of ailing German lender Hypo Real Estate in 2007, only to launch a €500 billion taxpayer-funded bank aid fund once the deal was done.

But Steinbrück's success as Merkel's sidekick also highlights one of his potential weaknesses as a candidate: It will be difficult to differentiate himself from the chancellor.

For some, of course, this will come as good news. Steinbrück's candidacy, due to his skepticism of profligate spending, is something of a guarantee that Germany's hard-nosed policy in the ongoing European Union debt and currency crisis is not likely to drastically change following next September's vote. But attracting voters on a platform of "look how wonderfully the chancellor and I worked together during the crisis" is likely to be difficult.

Steinbrück appears to be aware of the problem. He has already said that he would never again be a minister in a Merkel cabinet, a clear indication that he wouldn't lead the SPD into another so-called "grand coalition" with Merkel's conservatives.

Furthermore, he has recently sought to remind voters that he is much more willing to consider far-reaching financial-market and banking reforms than Merkel has been. Having been tasked by his party with coming up with a plan for preventing a financial crisis redux, Steinbrück released his report last week. It calls for splitting off investment banking from the traditional lending and savings functions associated with retail banking -- a proposal that would mean nothing less than breaking up large financial institutions. He also envisions the creation of a bank-funded aid pool to bail out troubled financial institutions so that taxpayer funds would remain untouched. In addition, he calls for controls on certain types of transactions, including speculation on cereals and other foodstuffs.

But the report itself highlights another pitfall facing Steinbrück -- the not entirely inaccurate accusation that he is a one-dimensional candidate challenging a proven jill-of-all-trades in Merkel. Steinbrück has, of course, held political office outside of the finance portfolio, most notably as governor of the state of North Rhine-Westphalia from 2002 to 2005. But he still has glaring deficiencies.

One of those is in the area of foreign policy. To be sure, Steinbrück spent a good deal of time jetting around Europe and across the Atlantic during the financial crisis, but he is not known for his diplomacy. While Germans appreciate his directness, the long list of foreign leaders he has taken to task might give some voters pause. For example, few will forget his legendary comparison of Switzerland with Ouagadougou, the capital of Burkina Faso, during a 2009 tiff over tax havens -- hardly the kind of thing that looks good on a would-be statesman's resume.

The potentially greatest hurdle facing Steinbrück, however, will be that of uniting the SPD grass roots -- and particularly the party's left wing -- behind his candidacy. He was a major supporter of the significant welfare and labor market reforms pushed through by SPD Chancellor Gerhard Schröder, a package known collectively as Agenda 2010. German labor unions were furious, and Steinbrück isn't likely to be a candidate capable of encouraging them to return to the fold.

Still, at the SPD press conference on Friday, Steinbrück seemed to indicate that that wasn't the party leadership's primary concern. The choice in his favor, he said, came out of the growing feeling that he "might be the best candidate to attract the most votes" given the issues currently facing the country. 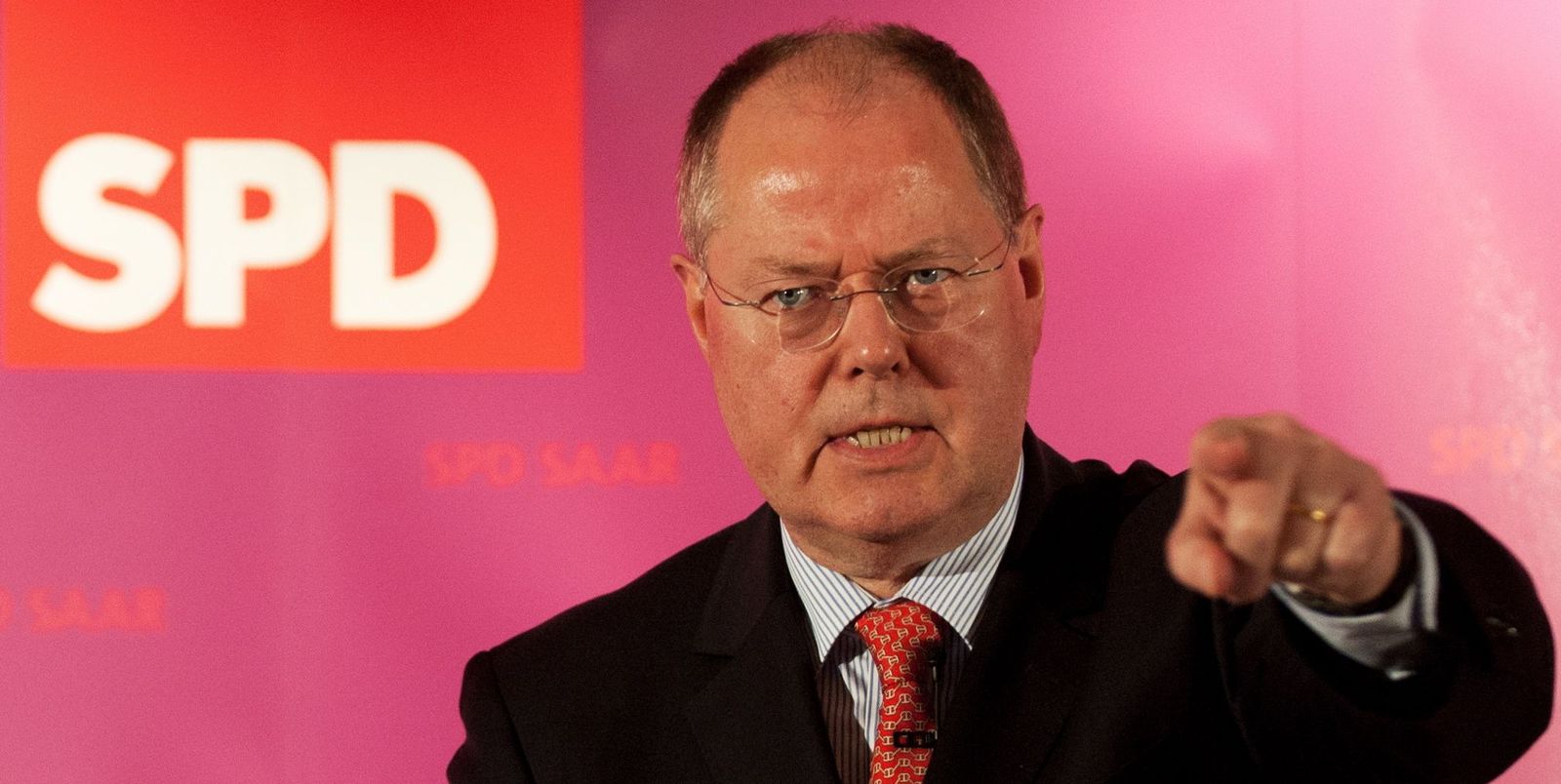 After months of indecision, Germany's Social Democrats have finally settled on a candidate for chancellor to challenge Angela Merkel in 2013 general elections. Peer Steinbrück, Merkel's finance minister during the dark days of the financial crisis, was chosen on Friday.