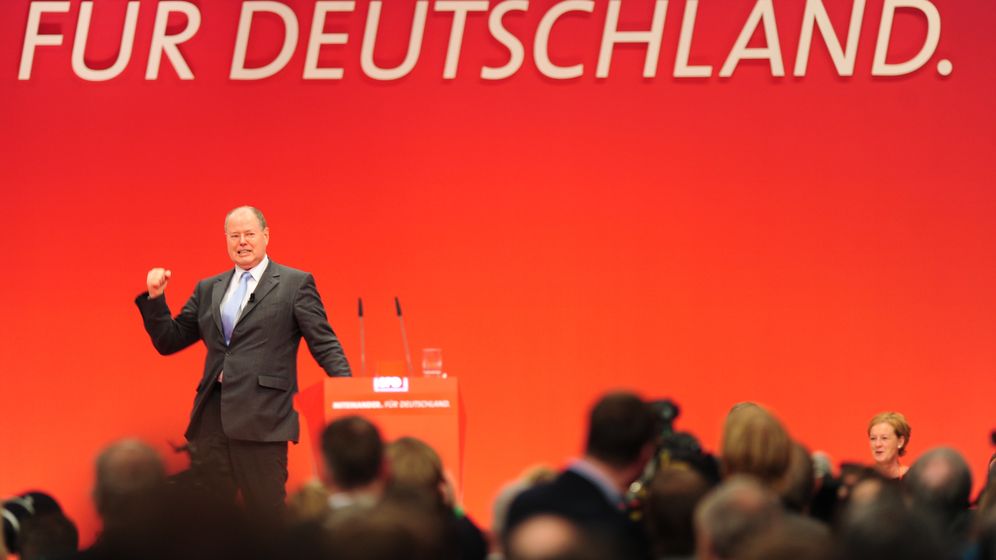 He doesn't stride up to the lectern. In fact, he doesn't look at it at all, shunning it as though it were the enemy. Peer Steinbrück sticks one hand into his trouser pocket, shifts his weight back and forth from his left to his right foot, and says: "If I stood behind it, I might make a remark that I would have to take back afterwards."

It's Friday evening, and he is standing in a concert hall in the northern German town of Emden, where he is set to give a stump speech ahead of the Jan. 20 state elections in Lower Saxony. The audience laughs at his remark, knowing full well what he means: Steinbrück has developed a reputation for putting his foot in his mouth. This time, though, his speech came off without any mishaps.

These days, that qualifies as news. Once Chancellor Angela Merkel's respected finance minister in the dark days of the crisis, he has since become the Social Democrats' candidate to dislodge Merkel from the Chancellery in elections this autumn.

"He can do it," former Chancellor Helmut Schmidt said in October 2011, a quote SPIEGEL used on its cover page at the time. But now one word in that sentence has changed, from "can" to "can't." It's become a real possibility that perhaps the SPD made a mistake when it selected Steinbrück to carry its torch.

Rarely has a candidate gotten off to such a bumpy start, and rarely has a candidate been so controversial within his own ranks as Steinbrück. On the Sunday before last, he managed to make two significant gaffes in one single interview with the Sunday paper Frankfurter Allgemeine Sonntagszeitung. First, he said that he found the chancellor's salary too low, thus creating the impression that he is hoping to improve his own future income. Second, he claimed that current Chancellor Angela Merkel has a "female bonus," even though many women justifiably assume that they are in fact at a disadvantage in professional life.

It was not the first slip-up, and once again SPD members were left shaking their heads in disbelief, as were politicians from the Green Party, the SPD's favored coalition partner. Meanwhile, their political opponents were happily exchanging high-fives.

This week, Steinbrück has found himself in the headlines again. According to the business daily Handelsblatt, Steinbrück, as a member of ThyssenKrupp's supervisory board, offered last January to provide political support should the company launch an initiative aimed at achieving lower electricity prices for industry. Steinbrück was a member of the board from January 2010 until the end of 2012 and was also a member of German parliament during that time.

Days of Peace Are Over

The SPD, not surprisingly, is beginning to wonder whether Steinbrück is the right candidate for the chancellorship. It starts with Chairman Sigmar Gabriel, who was measured in his comments on Steinbrück in a SPIEGEL interview. But in the candidate's own camp, aides have long noticed that what Gabriel is saying off the record isn't nearly as congenial.

So much resentment has built up that some prominent party members are already publicly berating Steinbrück. Erhard Eppler, a former cabinet minister and later a leading thinker in the SPD, says: "The aphorism: 'Becoming chancellor isn't difficult, but being chancellor is,' applies to some politicians. But in the case of Peer Steinbrück, it seems to be the other way around." The left wing of the party, which has long feuded with Steinbrück but had been loyal to him since October, intends to keep a very close eye on him in the future. The days of peace in the SPD are over.

Some members of the Green Party have also had enough. The party's parliamentary group -- the same people with whom Steinbrück hopes to form a coalition government -- has been especially critical. Parliamentarian Ulrich Schneider tweeted his "Wish for 2013: That the SPD quickly realizes that Steinbrück will never become chancellor, and soon stops backing a dead horse!"

Steinbrück has thus far seemed unimpressed by the criticism. He insists on his right to say what he has to say -- though it has begun looking as though he has even greater ambitions, as though he aims to challenge the entire political system. It is generally accepted that the higher a politician rises on the political ladder, the more guarded he or she must be. Steinbrück, however, wants to be able to speak freely. He takes an emotional approach to politics, one that he is determined to preserve, even though it could cost him the candidacy.

The party kept quiet in late 2012, even as the gaffes mounted. Party leaders defended him and the rest merely kept silent. But now that the election year has begun, the SPD's patience has run out. The consternation over his most recent mistake pervades all wings of the party and all SPD state organizations.

After the interview in the Frankfurter Allgemeine, hardly any top politician was willing to stand up for Steinbrück, with only General Secretary Andrea Nahles assuming the role of public defender. Even Steinbrück's supporters are speechless about his poor judgment in making such remarks publicly, especially at a time like the Christmas holidays, when there typically isn't much else in the news. "The deliberate traps in this interview should have been recognizable," says Rolf Mützenich, the foreign-policy spokesman of the SPD parliamentary group.

The left wing of the party is especially disappointed. It has long been irritated by the candidate's bizarre behavior but has said nothing. They are also critical of Steinbrück's seeming unwillingness to further policy demands that are central to the SPD's left, a concern that many had even when the former finance minister was chosen to represent the party. After the interview on the chancellor's salary was published, senior left-wing leaders called each other to discuss their frustrations -- and they decided to break their silence and to publicly criticize Steinbrück.

The group has called a meeting for the beginning of February in Berlin to consider Steinbrück's progress. "I expect that the SPD's message become clear on issues such as the labor market, pensions and on climbing rents," says Jan Stöss, SPD head in the city-state of Berlin.

Steinbrück hadn't expected to be Chancellor Angela Merkel's challenger. After he and the SPD were voted out of government in the fall of 2009, he stopped leading a serious political life. He was still a member of the German parliament, the Bundestag, but he seemed to devote more of his energy to writing a book and giving speeches, for which he was paid handsomely. He wasn't living the way a high-ranking representative of the SPD should live, but rather the way private citizen Steinbrück prefers to live. Even after receiving Schmidt's endorsement, he didn't shape his life to conform to his ambitions. He was now a gambler who had chosen a high-risk approach.

Pinot Grigio and the SPD's Soul

Yet when he became the SPD's candidate, he was suddenly the center of attention, and soon his secondary sources of income became an issue. He had collected €1.25 million ($1.64 million) in speaking fees between November 2009 and July 2012. One fee seemed particularly objectionable: €25,000, for a roughly one-hour speech, paid by the public utility in the cash-strapped city of Bochum in the industrial Ruhr region.

Steinbrück eventually decided to utter a few words of regret about the Bochum case. Otherwise, though, he insisted that everything had been perfectly legal, and then proceeded to accuse the media of hyping the issue. He seemed not to understand that the SPD still wants to represent the working class and that some of its voters might find it unfair that men like Steinbrück are paid a lot of money for little work, while they are paid little money for a lot of work. A few explanatory remarks certainly would have helped, but Steinbrück brusquely rejected such demands as an imposition. It had all been completely above reproach, and that was that, he said.

But that wasn't that. In early December, he cheerfully said: "I wouldn't buy a bottle of Pinot Grigio for only €5." The connoisseur with exquisite taste isn't exactly a standard role in the world of Social Democrats.

In the wake of this string of gaffes, it seemed odd for Steinbrück to be telling the Frankfurter Allgemeine Sonntagszeitung, on Dec. 30, that the German chancellor's salary is too low, as if he were making sure that he would never have to drink a bottle of Pinot Grigio for less than €20. Indeed, in the first weeks of his candidacy, Steinbrück has given the impression that money means a great deal to him -- and that he has but little sympathy for the concerns of people with low incomes.

Nobody, of course, expected Steinbrück to be a flawless Social Democrat. He has long tended to be obtuse when it comes to social issues. Steinbrück is a fiscal policy expert by nature and has often found himself at odds with lawmakers who focus on social policy, because they need budget resources for their programs. Furthermore, Steinbrück has always been a big supporter of the far-reaching welfare reforms passed under SPD Chancellor Gerhard Schröder. The reforms have since fallen into disrepute in his party, but Steinbrück has called them "one of the greatest political achievements of the postwar era." Many SPD social policy experts will never forgive him for that remark.

Most of all, Steinbrück has an eye for economic issues. Indeed, his entire disposition places him more squarely in the camp of employers than that of workers.

There isn't anything objectionable about this, of course. It does, however, make his path to the Chancellery, a path that he must tread with the full support of the SPD, that much more difficult. Fairness remains one of the party's biggest issues and he has to represent the interests of SPD voters in a credible way, which requires incorporating their desires and sensitivities into his message. In this respect, he hasn't found the right balance. He is still the candidate of the Steinbrück party, not of the SPD. This is as egocentric as it is unprofessional.

In short, the situation could hardly be worse after three months. How does the SPD expect to win an election with a candidate who alienates a large share of his party, consistently trips over his tongue and is engaged in a subtle feud with the party chairman?

Waiting for the Next Gaffe

Steinbrück's candidacy isn't quite on the rocks yet, but the party will not support his candidacy forever. Jan. 20, when Lower Saxony elects a new state parliament, is an important date. If the SPD loses ground in that election and fails to regain power, the chatter will only increase.

Given Steinbrück's temperament and defiant nature, his gaffes could very well continue. At the moment, hardly anyone feels confident in victory, although it is possible, depending on how many of the smaller parties capture seats in the Bundestag.

In their defeatist hours, leading Social Democrats sometimes make a leap forward in time. Instead of focusing on the 2013 election, their thoughts turn to 2017. By then, the current governor of the western state of North Rhine-Westphalia, Hannelore Kraft, will be ready for a candidacy. She is already the most popular SPD politician among voters, though she declined to run this time around, and party members see her as a woman who can embody the heart of the center left.

For now, it seems likely that the party will stomach Steinbrück until the end of this election campaign. But what about him? Will Steinbrück stomach the SPD much longer? He is an impulsive and sensitive person, and he would certainly not tolerate every act of blasphemy or disloyalty. But that point hasn't been reached yet. Steinbrück wants to keep going and keep on talking. Which means that it is only a matter of time until the next gaffe hits the headlines.