At a congress in Hanover, the center-left Social Democrats on Sunday formally elected former finance minister Peer Steinbrück as their candidate to run against Chancellor Angela Merkel in next year's election, backing him with an impressive 93.5 percent of the vote.

No one opposed him in the rubber-stamp vote that was intended as a psychological boost to the no-nonsense and at times abrasive pragmatist who has struggled to win the hearts of the center-left party, fiercely proud of its roots in the 19th century labor movement.

"I am proud to be a German Social Democrat!" Steinbrück said in a 100-minute speech during which he pledged his commitment to the SPD's socialist ideals, calling for higher taxes for the wealthy and the introduction of a minimum wage.

"Germany needs more 'We' and less 'I'," he said. "The gap is growing between rich and poor because of a growing number of under-paying jobs and because of our poorly financed towns and cities."

But the controversy that has dogged him in the two months since he was picked as the SPD's candidate in late September briefly came back to haunt him when Greenpeace activists unfurled a banner behind the podium that read: "Did you rake in enough dough?"

The 600 delegates present booed before the banner was hauled off the wall. Steinbrück, a member of German parliament, has come under attack for earning €1.25 million euros ($1.6 million) as a guest speaker at corporate events during the last three years. While the speaking engagements were not illegal, they have not been well-received by his party, conscious as it is of its working-class grassroots.

Steinbrück, a former governor of North Rhine-Westphalia, Germany's most populous state, served as finance minister under Merkel from 2005 to 2009 in a "grand coalition" between her conservatives and the SPD. He won praise for his assured handling of the global financial crisis and subsequent economic downturn in 2008 and 2009. But he has been unable so far to allay doubts about whether he will be able to mobilize enough center-left voters to have a chance of ousting Merkel. Sunday's congress was aimed at reassuring the party was behind him.

He faces an uphill struggle to beat Merkel. An Infratest dimap survey published last Friday showed that, were Germans able to vote directly for their chancellor, 49 percent would support the incumbent chancellor with just 39 percent of respondents saying they would vote for Steinbrück. Still, that gap has narrowed in recent weeks.

More to the point, Merkel's Christian Democratic Union party (CDU), together with its Bavarian sister party, the Christian Social Union (CSU), stood at 39 percent in the poll, well ahead of the SPD at 30 percent. The Greens scored 14 percent and the pro-business FDP, Merkel's junior coalition party, was at 4 percent, below the 5 percent threshold it would need to be able to stay in parliament. The survey was carried out between December 3 and 5 and commissioned by public television channel ARD.

The FDP is Merkel's Achilles heel. She remains popular because Germans credit her with having defended the nation's interests in the euro crisis so far, by blocking calls for the introduction of common euro bonds, for example. And she has deftly nudged the CDU to the left, backing proposals for a minimum wage and better state support for childcare, and thereby encroaching on core SPD territory. But the FDP is so weak that she may need a new coalition partner to stay in power. The SPD or the Greens seem to be her only options.

Steinbrück, 65, ruled out serving in another grand coalition. "I don't just want a partial change of government," he said to loud applause. "I want an entirely new government. I want an SPD-Greens government for our country. I'm not available for any grand coalition."

Political analysts say, however, that such a coalition is the most likely outcome of the next election. 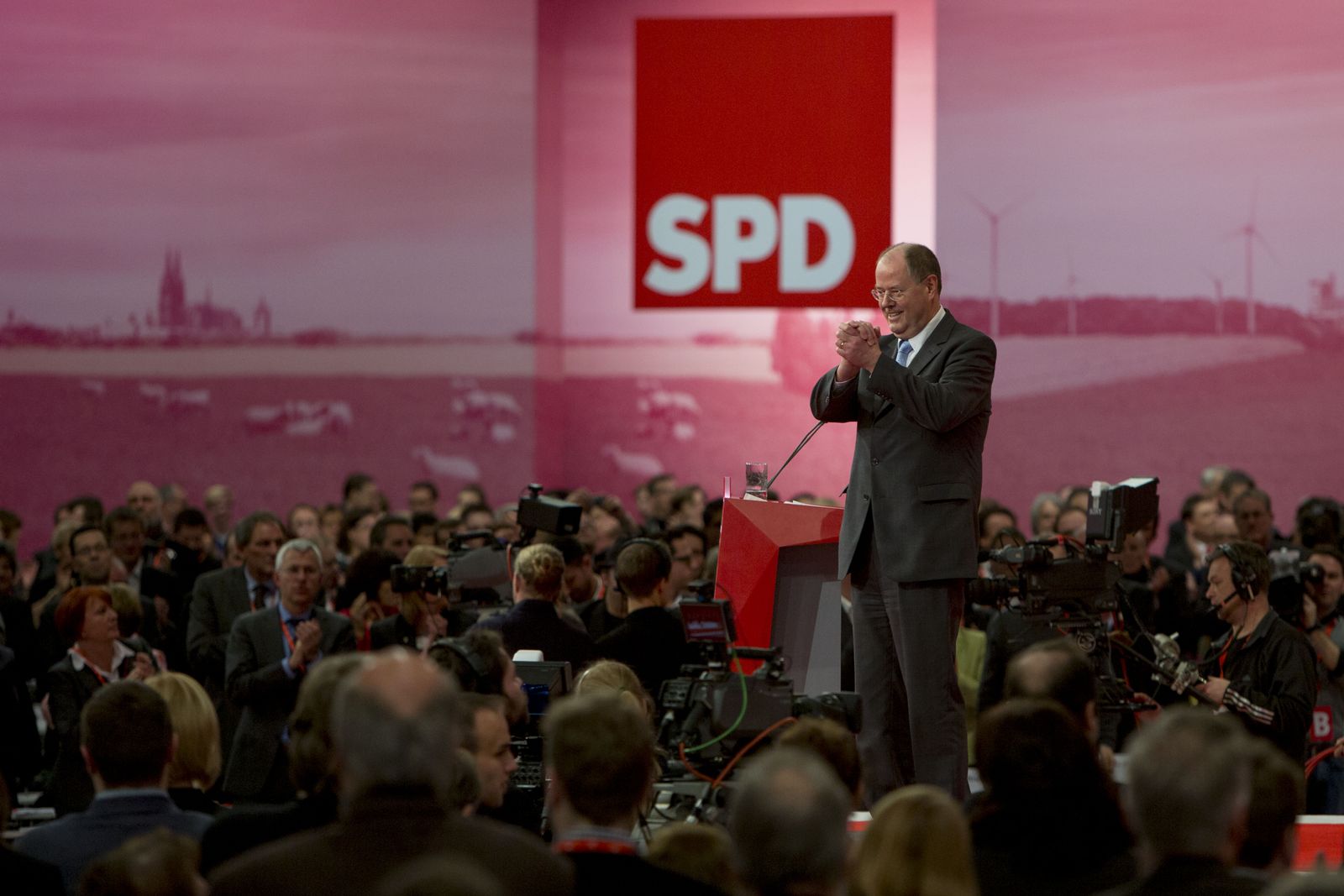 Peer Steinbrück tried to present himself as the perfect Social Democrat on Sunday.