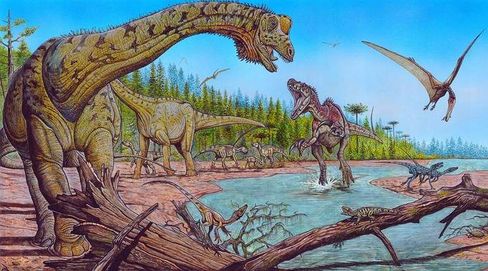 Dinosaurs may have been around longer than first thought.

Dinasaurs are old. That much we knew. But a new find in a limestone quarry located in the eastern German state of Saxony-Anhalt may show that they are fully 15 million years older than scientists currently believe.

According to a Tuesday report in the Mitteldeutsche Zeitung, a local paper in the region, archaeologists working in the quarry found traces of a dinosaur that they believe are 250 million years old -- older than any known evidence of dinosaurs. So far, officials from the state's Office for Preservation of Monuments and Archaeology have declined to confirm the find. A spokeswoman there has merely pointed out that the quarry is still in operation and that hobby diggers should stay away.

The scientific community, though, is electrified. Should the age of the traces be confirmed, the find could shed light on the very beginnings of dinosaurs. One expert told the paper that the find is of "sensational importance to science."

Until now, scientists assumed that dinosaurs first evolved from archosaurs approximately 235 million years ago -- a good 15 million years after the creation of the dinosaur traces now discovered. Archosaurs were lizard-like creatures that were much smaller than most dinosaurs. Present-day alligators, crocodiles and birds are likewise descendents of archosaurs. Dinosaurs, though, died out some 65 million years ago.

Scientists have been able to use bones, fossils, footprints and other traces to reconstruct the so-called Mesozoic age, the period when dinosaurs roamed the Earth. It is an age divided into three periods, the Triassic, Jurassic and Cretaceous -- with the current find perhaps pushing back the earliest years of the Triassic.

Digs in Germany have long been providing clues to the earliest years of dinosaur life. In fact, the first fully intact dinosaur skeleton discovered in the world was unearthed from German soil -- the so-called Archaeopteryx, which provided proof of the link between dinosaurs and the modern bird. Scientist Richard Owen first reported on the find in 1863, lending crucial support for Charles Darwin's then-controversial theory of evolution published a short time earlier.