Germans are furious. Revelations that the United States and Britain -- along with Canada, New Zealand and Australia, as part of the so-called "Five Eyes Alliance" -- have spent recent years keeping a suffocatingly close watch on web and cellular communications have led politicians in Berlin to utter increasingly drastic condemnations. Over the weekend, for example, Justice Minister Sabine Leutheusser-Schnarrenberger referred to the British surveillance program Tempora as a "catastrophe" and said it was a "Hollywood-style nightmare."

But is there not a time and a place for mass data collection? This, too, is a question Germany is grappling with this week after the capture of a truck driver who spent years shooting at other vehicles on the country's autobahns. He was caught only after police set up a complicated surveillance system which was able to read the license plate numbers of tens of thousands of cars and trucks on the country's highways.

The operation has unsettled data protection activists. But Jörg Ziercke, head of Germany's Federal Criminal Police Office (BKA), praised the effort on Tuesday, telling journalists that "we have found the famous needle in a haystack." He said there was "no alternative" to the intensive surveillance efforts the police used to capture the perpetrator.

The case involves a truck driver who fired at least 762 shots at cars and trucks on German highways and at buildings in a shooting spree that began in 2008. In several cases, his targets were only barely able to avoid accidents as a result of the shots. In 2009, one woman was hit in the neck with a bullet fired by the truck driver, identified on Tuesday only as a 57-year-old truck driver from North Rhine-Westphalia, but survived.

German officials said on Tuesday that the driver would be charged with attempted murder in addition to weapons related charges. Ziercke said the man had confessed soon after he was arrested over the weekend and said that he had acted "out of anger and frustration with traffic." He said that he saw the situation on Germany's autobahns as a kind of "war" and that he had merely been trying to defend himself.

Yet as unique as the case is, the methods employed by the police to solve it have attracted more attention. Initially, officers sought to attract shots themselves, driving a truck on the autobahns between Cologne, Frankfurt, Nuremberg and Karlsruhe where most of the gunfire had been reported. The police vehicle, however, was never targeted.

Plan B is the one that has raised data protection concerns. Even though Germany has a toll system which collects information on the trucks plying the country's highways, police are forbidden access to the data collected. So they essentially constructed one of their own. On seven sections of the autobahns in question, police erected equipment that was able recognize and store the license plate numbers of vehicles that drove by. Using that data, they were able to identify vehicles that passed a certain section of highway at roughly the same time as did a target vehicle.

In April, the system hit pay-dirt. In just five days, six drivers reported being shot at. Officers were able to reconstruct the likely route taken by the perpetrator and they then looked at the license plate data collected by cameras stationed along that route. By filtering through the information gathered, they were able to identify one truck that could have been at each site where shots were reported. They were then able to match up the route with the mobile phone data of the driver. "The correspondence" between the two data sets "was clear," Zierke said on Tuesday.

But were the methods employed by the federal police legal? Data protection officials aren't so sure. "Even if the search for the highway shooter was successful in the end, from a data protection perspective the preliminary verdict on the methods used is rather ambivalent," Edgar Wagner, the top data protection official for the state of Rhineland-Palatinate, said in a statement. "There is not a sufficient legal basis for such a nationwide … investigative technique."

He said that by his calculations, "60 to 80 million sets of data from completely innocent people" were gathered during the course of the investigation "to catch a single suspect. We have (long) known that such a procedure can be effective. But there is also a price to pay."

It is a sentiment that is shared by many in Germany. The country has had plenty of experience with state overreach, with both the Nazis and the East Germans being experts at keeping close tabs on their citizenry. That history manifests itself in an extreme sensitivity to data privacy issues and the country has been particularly watchful when it comes to the use of digital data by companies such as Google and Facebook. Indeed, government officials beyond the Justice Ministry have reacted to US and British digital spying with notable vehemence.

It is perhaps not surprising then, that Wagner is not alone with his concerns. While not directly criticizing the methods used by federal police to track down the autobahn shooter, Wagner's data-protection counterpart in North Rhine-Westphalia, Ulrich Lepper, expressed serious reservations in a Wednesday interview with the Bonn daily General-Anzeiger.

"The freedom to move around in the public space without being monitored is one of our fundamental rights," he said. "Data protection -- the right to control information about your person -- means that you can decide who knows what and when … about you. These rights can only be infringed upon on the basis of a law."

Ziercke, not surprisingly, does not share such concerns. He believes that law enforcement should have access to the data collected by the truck toll system and also argued on Tuesday that data collection could be a powerful preventative measure. "I would like to meet a data protection activist who is able to convince someone with the argument that we should not have been allowed to use that data to prevent danger," he said. "I don't find such arguments to be credible."

Ziercke's argument is notably close to that used by US President Barack Obama in defending the National Security Agency's online spying program Prism. The data gathered is useful, Obama has repeatedly insisted this month, for the prevention of terror attacks.

Germans have largely rejected that line of argumentation. Whether their scorn will be applied closer to home remains to be seen. 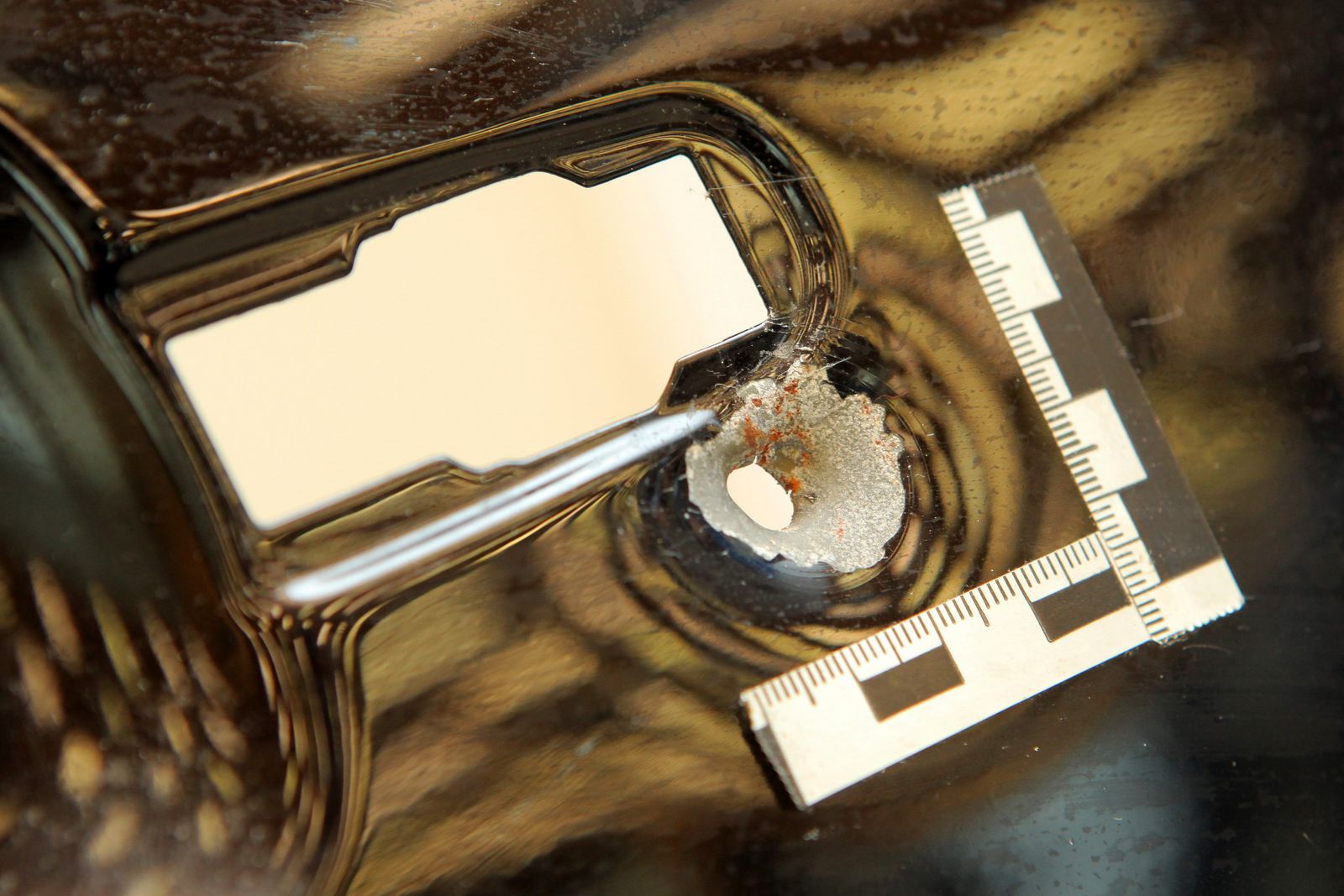 A bullet hole in a car door. A man who has shot at hundreds of vehicles on German highways in recent years has been apprehended.