SPIEGEL: Dr. Groos, you've said that, during your first deployment to Afghanistan, in 2002, it felt like you were at a Boy Scout camp. When did things start getting a bit less carefree?

Heike Groos: The first death destroyed the atmosphere for me. It happened during my second deployment to Kabul. I'd been expecting everything to be like it had been the first time -- lots of sun, beautiful landscapes, nice colleagues and a friendly local population. Then one of our all-terrain vehicles ran over a mine and was blown up, killing a young soldier instantly. He was brought into the camp and handed over to us for a medical examination. It was when I was alone in the armored field ambulance with this dead boy -- a kid who reminded me of my oldest son -- that I realized where I was and what I was going to have to deal with.

SPIEGEL: The longer you were there, the more doubts you had about the logic behind the mission. How did they arise?

Groos: We underwent a significant change after experiencing the first terrorist attack aimed directly at us. A suicide bomber blew up one of our buses, killing four of our soldiers and seriously wounding many more. After that, we were more careful, more nervous, more wary. Later, when new soldiers arrived from Germany, it seemed like they had been trained somewhat differently for their assignment. The first thing they said when they got off the plane was: "Where are the Taliban? We want to fight them!"

SPIEGEL: How has the experience changed you?

Groos: Heightened danger made me more thin-skinned -- but also tougher. Today, if someone attacked my kids, I could shoot that person dead and have no trouble sleeping at night. I don't know whether I should find that disturbing or not.

SPIEGEL: What was your worst experience in Afghanistan?

Groos: That would be the suicide attack on our bus in June 2003. There was absolute chaos, and it was way too much for our assistants to handle. I assigned numbers to the wounded, noted their injuries, and saw to it that they got the medical attention they needed so that they could be transported elsewhere. After they had all been taken away, it was eerily quiet. Another doctor, myself, and the dead were the only ones left. At that point, we didn't know what to do next. Normally, as an emergency physician, you express your condolences to the dead person's family and then you leave. But in this case we'd somehow slipped into the role of the bereaved.

SPIEGEL: Were you haunted by memories of the attack's aftermath?

Groos: For a while, yes. There were specific things that would trigger flashbacks, like the smell of roasted chicken. The soldiers had all been burned.

SPIEGEL: You managed to stick it out until 2007. Why did you ultimately decide to leave the army?

Groos: I didn't want to continue being part of this insane mission. I didn't want to go on seeing young men die senselessly. Lots of other doctors felt the same way and left as well. Modern warfare like this has made doctors like us superfluous. Soldiers are blown up and killed instantly. We can't put them back together again. I think one of the reasons why so many doctors have left the military is their feeling of helplessness. Another reason is that the current shortage of doctors means that many of them are sent to Afghanistan against their will.

SPIEGEL: Is there any way to get out of being deployed to Afghanistan?

Groos: About the only way to do that involves going to a psychiatrist. We doctors aren't dumb; we know exactly what we have to say to make a psychiatrist disqualify us for deployment abroad. And some doctors do just that: They say they wouldn't be able to cope with the situation, that they are already prone to depression, that they have trouble sleeping and that they have suicidal tendencies. But, of course, saying these things will also ruin their careers.

SPIEGEL: After your last deployment, you moved to New Zealand. And, shortly after that, you suffered a nervous breakdown.

Groos: I had thought I was doing just fine. But, in actual fact, I had bottled up lots of stuff inside. It was like a dam suddenly broke and released huge masses of water that washed away everything that had kept me stable. I just sat there in my chair and had no idea what was wrong with me.

SPIEGEL: You've written that you're happy that you didn't have your breakdown in Germany. Why's that?

Groos: I've witnessed the inhumane treatment of traumatized veterans in Germany. They are sent to military psychiatrists who are quick to recommend hospitalization. An acquaintance of mine was told he would need to be hospitalized for his headaches. It was only after he was in the hospital that it became clear to him that he was going to be locked up in the psychiatric ward. How was that supposed to help him? That's like getting thrown in prison for a trivial offense. 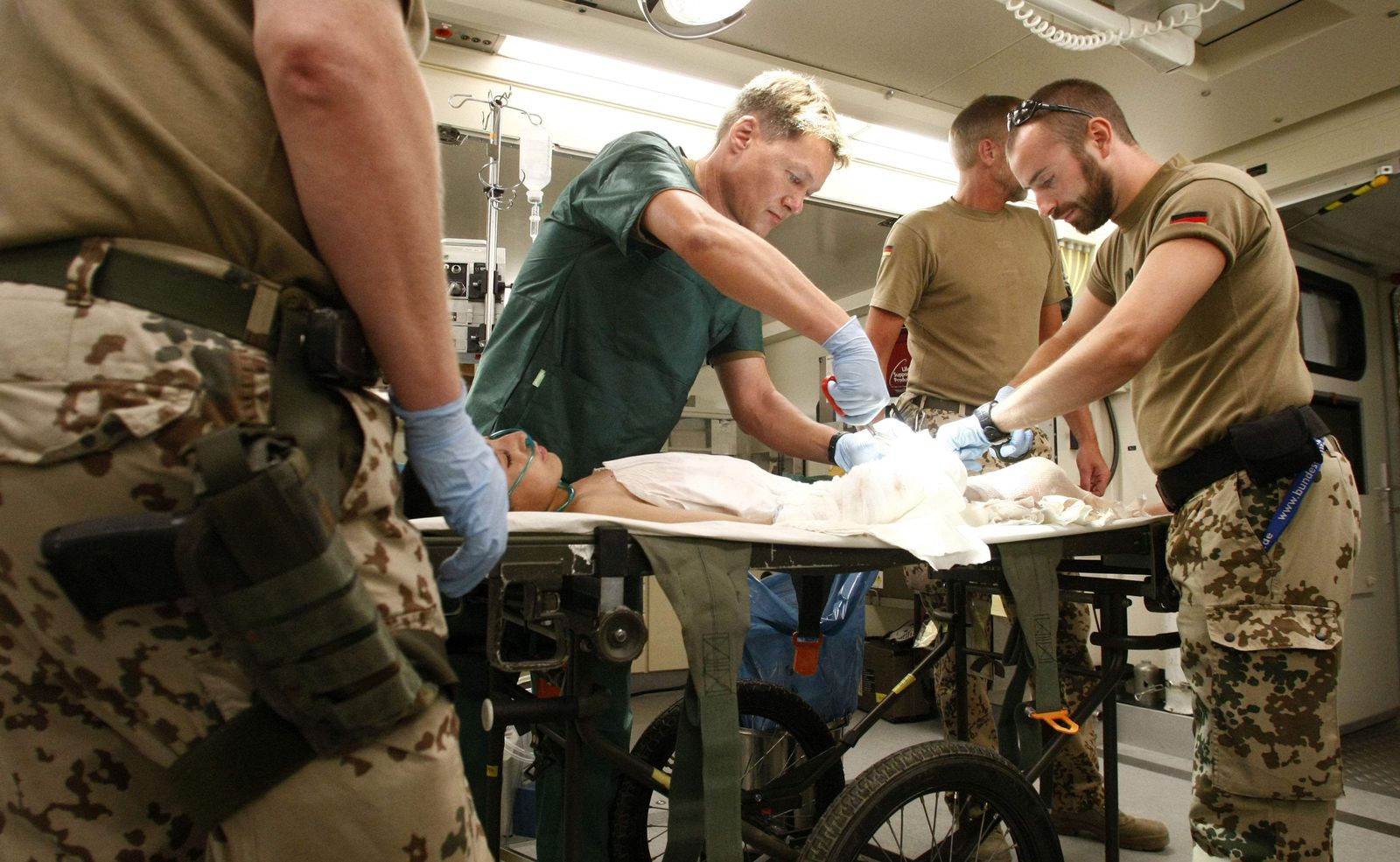 German army doctors provide medical treatment to a boy with serious burn injures in the emergency room of their army camp near Kabul, Afghanistan.