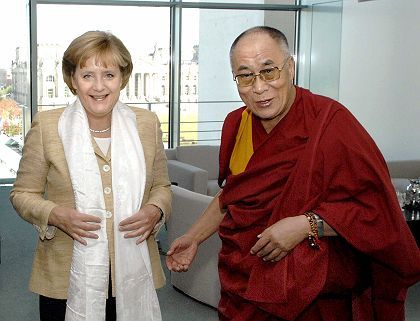 German Chancellor Angela Merkel has been accused of "shop window" politics for her visit with the Dalai Lama in September.

When German Chancellor Angela Merkel held a private meeting with the Dalai Lama on Sept. 23, she sparked one of the worst crises seen in German-Chinese relations in years. The German government has long struggled in its ties with China to balance its business interests with its foreign policy of promoting human rights in a country that holds little regard for them and has also brutally suppressed Tibetan people, whose spiritual leader is the Dalai Lama.

Officials in Beijing recently told SPIEGEL that the Dalai Lama meeting would have "long-lasting effects" on German-Chinese relations and that the basis for trust between the two countries had been destroyed. Beijing also cancelled annual human rights talks between the two countries and that the German government must "take steps" to repair the damage. A spokeswoman for the Chinese Foreign Ministry said the meeting "hurts the feelings of Chinese people and seriously undermines China-Germany relations."

At least publicly, Merkel has been far more critical of Beijing than her predecessor Gerhard Schröder. And that has created a rift in the current coalition government, which includes Schröder's Social Democrats (SPD) as its junior partner and Schröder's former chief of staff, Frank-Walter Steinmeier, as its foreign minister and vice chancellor.

In an excerpt from an interview in this week's SPIEGEL, Steinmeier discusses recent developments in China and what he sees as the appropriate approach in dealing with countries with democratic deficiencies like Russia and China.

SPIEGEL: At a recent SPD party congress, you complained of "shop window policies" regarding human rights. You were referring to Chanceller Merkel, weren't you?

STEINMEIER: By that I mean that I see a need to discuss how best to conduct policy on human rights. Our benchmark must be that we help people and human rights. Political prudence requires that one use the right means in the battle for good

SPIEGEL:  and one should not invite the Dalai Lama to the Chancellery?

STEINMEIER: The chancellor has to have the freedom to decide whom she receives and where. In that regard we won't let anyone interfere with what we do. In terms of the current deep irritations in our relations with China, it is of course regrettable that the dialogue about law-based government that has been painstakingly built up over years, and in which human rights has been placed at the forefront, has now been interrupted. That is also true of the cancellation of (German) Finance Minister Peer Steinbrück's visit (to China).

STEINMEIER: That may be true. But I certainly would not pit economic interests against human rights. Advocacy of human rights remains a fundamental component of German foreign policy. The question is how we can best do that. Perhaps we as Social Democrats have a more emphatic experience with policies of détente. During the Cold War, we sought to open up channels of communication and build bridges so that exchange was possible between people -- despite the systemic conflicts between the states.

SPIEGEL: But that's where a fundamentally different approach is visible. Parts of the Christian Democratic Union (the party of conservative Chancellor Angela Merkel) regard precisely this SPD tradition of détente as shunning tough criticism and the wrong way to deal with dictators. 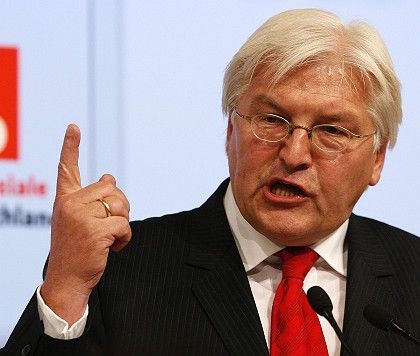 German Foreign Minister Frank-Walter Steinmeier: "I give the chancellor no instructions on who she should speak to."

STEINMEIER: As federal chancellor, Helmut Kohl often praised Willy Brandt's Ostpolitik (German policy towards the former Eastern Europe). But today I can see some people to adopting a tactical stance towards this policy. Some even dismiss this painstaking dialogue with authoritarian states as walking on eggshells or as the abandonment of criticism. But I disagree. My approach to authoritarian states is beyond reproach -- I use open, very clear words -- even if I do not always do so in front of the cameras. The accusation that I sweep issues worthy of criticism under the carpet is nonsense.

SPIEGEL: Former Chancellor Gerhard Schröder stood out with the strong sympathy he showed for the governments of Russia and China. During his recent visit to Beijing, he publicly blamed Chancellor Merkel for receiving the Dalai Lama. Are you distancing yourself from Schröder?

STEINMEIER: For a number of years I, working together with Gerhard Schröder, conducted successful policy. I have no reason whatsoever to distance myself from that.

SPIEGEL: But the criticism of Schröder's behavior is justifiable.

STEINMEIER: What I have to say, I will tell him myself.

SPIEGEL: Should former heads of government be allowed to criticize current office holders during trips abroad?

STEINMEIER: Do not overreact. There are plenty of examples of such things happening in the past.

SPIEGEL: At the same time, you still believe that former opposition leader Merkel should not have been allowed to attack Chancellor Schröder over the political course he took against the United States in 2003 in the run-up to the Iraq war?

SPIEGEL: Then you should be criticizing Schröder for the same thing.

STEINMEIER: I feel it is good when Germany presents itself as unanimously as possible.

SPIEGEL: Do you share Schröder's opinion that Merkel is too emotional in her dealings with authoritarian states because of her East German background?

SPIEGEL: German Interior Minister Wolfgang Schäuble has accused you of virtually encouraging the Chinese to increase their pressure on Berlin. Isn't this criticism justified?

STEINMEIER: Those are tactical games. And Mr. Schäuble knows better. I give the chancellor no instructions on who she should speak with. At the same time, the conservatives shouldn't hold me responsible for the consequences.

SPIEGEL: Schäuble also noticed that you, in contrast to your predecessor, did not receive the Dalai Lama. When do you plan to meet with him?

STEINMEIER: Should we mutually count out our visits? After my meeting with opposition leader Garri Kasparov in Moscow I didn't reproach the CDU people for not having visited him yet.

SPIEGEL: How long will the ice age last in relations with China?

STEINMEIER: I do not know. Officially, it hasn't even been declared. But I will work to ensure that the current irritations pass quickly.

SPIEGEL: Perhaps there is nothing you can do, anyway, given that every foreign government asks the Chancellery if the chancellor views things the same way you, the foreign minister, do.

STEINMEIER: Experienced ambassadors have always sought talks with both the Chancellery and the Foreign Ministry. Incidentally, our ambassadors abroad do the same thing.