The "Panorama" section of this year's Berlin International Film Festival opened with the world premiere of "Lemon Tree," the story of a Palestinian widow's fight to save her family's lemon orchard.

After the new Israeli defense minister moves in next door, he decides her trees pose a security threat and she is ordered to uproot them. She enlists the help of a young lawyer and a tentative romance begins, as the two take their David and Goliath fight to the Israeli Supreme Court.

SPIEGEL ONLINE spoke with Eran Riklis about "Lemon Tree" and how he tried to put a human face on a political story.

SPIEGEL ONLINE: How did you come up with the idea for  "Lemon Tree"?

Eran Riklis: It's based on a few true stories that I encountered, plus hundreds of thousands of stories that are similar, in the sense of a Palestinian person trying to protect his house, his land, his trees or whatever. The unique thing here was, of course, the proximity between the Palestinian woman and the defense minister, which is also based on several defense ministers who lived in that region, so it was almost too good not to be told.

SPIEGEL ONLINE: Did you think of it as a political film, or were you trying to tell more of a human story?

Riklis: I saw the opportunity to take a sort of political story but go beyond it into the human side of the story. Rather than being judgmental, I try to present a situation where you feel for these people and then you make your own judgment about them, about who you want to sympathize with. Of course, I guess most people will sympathize with the Palestinian woman.

SPIEGEL ONLINE: But the defense minister's wife is a very sympathetic character as well.

Riklis: Yes, I wanted to put a human face on the "bullies." She was supposed to reflect another side in a way and possibly a certain sensibility on the Israeli side -- a kind of growing awareness. It is something lacking in many situations in Israel, in which people are really close to things happening outside their own window and normally they don't notice it. I think it's about her at a relatively late age discovering an awareness of her neighbor.

SPIEGEL ONLINE: She seems to be almost yearning to talk to this woman. Was there a sense of showing that if women were talking to each other things might be different, in what is a very macho world on both sides?

Riklis: I think the film is not a campaign for women to rule the world. I guess it becomes a little bit smarter than that -- that's why they never talk. I think that's a realistic view of how things are because, in reality, I don't see the defense minister's wife going to a Palestinian woman's house to have coffee in the afternoon.

SPIEGEL ONLINE: So, you didn't want it to be a fairy tale?

Riklis: I didn't want it to be a sort of American movie, in the bad sense of the word, you know, where if it was Julia Roberts going to visit her, there would be peace in the end. For me, that sort of film doesn't work. You have to maintain a sort of credibility which goes beyond the conventions of genre in a way. 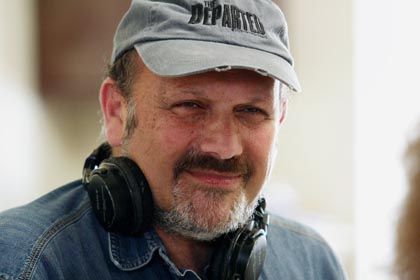 SPIEGEL ONLINE: The defense minister is the most unsympathetic character and he is responsible for this wall between the Israelis and the Palestinians. Was this a deliberate criticism of the wall?

Riklis: Yes, the wall, the physical wall you see in the film represents all the walls and all the borders that exist within that territory. And I think a lot of it has to do with emotional or mental borders or walls, especially here in the Middle East where there are so many walls that are created by tradition and religion and bad blood from the past. This wall is being built and, in the end, it will lead to separation, which on the one hand makes some people feel: "Great we have a separation now, we are safe," but on the other hand it means that there will be no dialogue.

SPIEGEL ONLINE: There is a very strong image when one of the characters opens a window and the wall is right in front of him.

Riklis: Yes, he is safe but he is imprisoned. He put his neighbor in prison, as well, but maybe freed her.

SPIEGEL ONLINE: Is the film about loneliness, too?

Riklis: Yes. You have a woman who fights against all the odds but who really is very much on her own because she is a widow and she does not have the support of her own community. She has the momentary support of her lawyer, but it's a passing kind of possible love affair. And, on the other side, you have a fading love between a man and a woman -- maybe there was never love there. And, in that sense, it's kind of a sad story but it's not tragic because there is so much humor.

SPIEGEL ONLINE: Your leading lady Hiam Abbass was in your previous film "The Syrian Bride." Did you write this role for her?

Riklis: Yes, absolutely. After "The Syrian Bride," I was looking for another project, and I thought to myself I would like to do another film with her in a real central role. And I came up with this story, and it matched her so well. She read the script and she loved it. We have a very good, very strong relationship and feel comfortable with each other and when we feel that we are doing something good together, it makes it all the better.

SPIEGEL ONLINE: Has the film been shown already in Israel?

Riklis: No, it opens at the end of March.

SPIEGEL ONLINE: Are you confident it will do well?

Riklis: The distributors feel it can be a big success despite the obvious dangers that it will be seen as a political film, and possibly a lot of people won't agree with the focus. But I am also pretty confident because I feel that if you get to the cinema, then you encounter a film which is enjoyable. It's humorous; it's communicative; it's not too difficult in many ways. And, you know, I think it's hard to resist Hiam Abbas who plays Salma -- even if you are a fanatic who wants to destroy the whole Arab world!