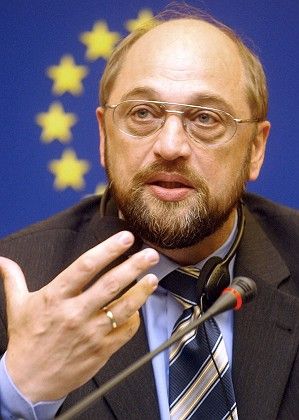 German MEP Martin Schulz is leader of the Social Democrat parliamentary group in the European Parliament. He is being touted as the next German EU commissioner.

The German nomination to the European Commission has become yet another point of disagreement within Germany's increasingly fractious grand coalition government.

Chancellor Angela Merkel said last weekend that she wants a member of her conservative Christian Democrats to fill the post when it becomes vacant in mid 2009. However, Kurt Beck, leader of the Social Democratic Party (SPD) disagrees. He says Martin Schulz, current leader of the Social Democrat parliamentary group in the European Parliament, would be best suited to take over from current German Commissioner Günter Verheugen. At the moment, each of the EU's 27 member states gets to appoint one commissioner.

SPIEGEL ONLINE spoke to Schulz about whether he has designs on the job.

SPIEGEL ONLINE: Mr. Schulz, the SPD has suggested you as the next German EU commissioner -- are you interested in the job?

Schulz: The question doesnt arise for me at the moment. That won't become an issue until after the European elections which are taking place in June next year.

SPIEGEL ONLINE: Would you like to take over from Günter Vereheugen on the Commission?

Schulz: I think it is a great honor to be considered for this position -- particularly as the German representative is currently also the deputy Commission president. I regard the fact that my party leader Kurt Beck has suggested me as a validation of my political work in Europe. However, I have a job which requires all my energy and concentration -- that of the leader of the Social Democratic group in the European Parliament.

SPIEGEL ONLINE: You are also being tipped for the job of president of the Parliament -- would that really be your dream job?

Schulz: I can only repeat myself: That, too, I regard as a great honor and a token of esteem. However, these matters will only be decided after the 2009 European elections. Up until then as parliamentary leader I have one goal: a successful European election campaign with the SPD and all the other parties in our group.

SPIEGEL ONLINE: Would you prefer it if CDU politician Roland Koch got the commissioner post?

Schulz: Once again: I am gratified to be considered for these jobs. I dont want to discuss any one else. It is clear that the coalition in Berlin will decide between a number of possible candidates -- and there is plenty of time for that.

SPIEGEL ONLINE: The current coalition is sure to agree on a suggestion for commissioner. However, following the German parliamentary election in 2009, there could be a new government, who would then have to live with that decision.

Schulz: You are right, of course. But I am not thinking about that at the moment.

SPIEGEL ONLINE: Can you live with the horse-trading though? For example, the SPD might agree to another term for CDU member Horst Köhler as German president, provided the Christian Democrats agree to a Social Democrat as commissioner in return.

Schulz: I dont see any connection between the election of the German president and the nomination of the EU commissioner. I dont get the term horse-trading in this context. It is clear, however, that the issue is being discussed very publicly and is causing a lot of controversy. It is up to national governments to suggest commissioners. That is the way things are. In the end Merkel and Kurt Beck are going to have to negotiate.

SPIEGEL ONLINE: You once said "Brussels is not a dumping ground for domestic politicians." From this point of view alone, you must feel that Koch would not be a suitable candidate.

Schulz: I dont want to comment on that. But one thing is clear: The top man in Brussels should have European experience, even if that wasnt always the case in the past. That was true, however, of Verheugen.