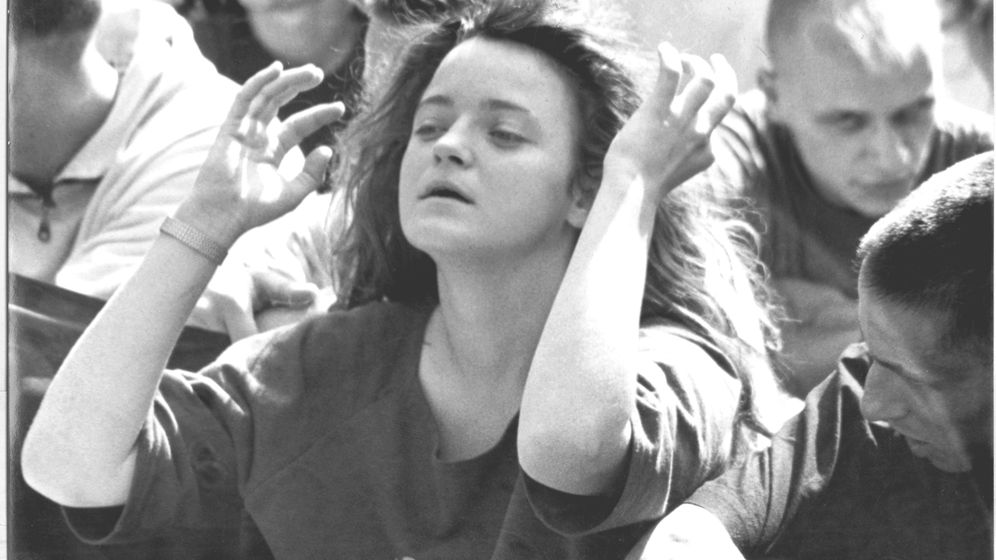 Germany's far-right National Democratic Party has been keen to distance itself from the Zwickau neo-Nazi terror cell, which is believed to have killed at least 10 people. But now a series of photographs from the past has surfaced and appears to suggest closer ties than the party would like to admit.

The photographs, provided by anti-fascist photographic archive Apabiz, were taken on Aug. 17, 1996. They show the current national NPD leader Holger Apfel and two of the cell's members -- Beate Zschäpe and Uwe Mundlos -- at the same neo-Nazi demonstration. In one photograph, Zschäpe and Apfel, who at the time was the head of the Young National Democrats, the NPD's youth organization, are separated by just a few meters and a couple of dozen people. Other photographs show Zschäpe and Mundlos sitting together. The trio would go underground together less than two years later.

Now, more than 15 years later, Zschäpe is in jail, accused of being a member of a terrorist organization. She, Uwe Böhnhardt and Mundlos are believed to have formed a group called the National Socialist Underground (NSU), allegedly responsible for at least 10 murders over seven years, including nine men of Turkish and Greek origin and a police officer. The case, which came to light in early November after Mundlos shot Böhnhardt and himself in a recreational vehicle in Eisenach following a botched bank robbery, has shocked Germany and sparked a new debate over whether the country is doing enough to stop the activities of neo-Nazis. It has also led to renewed calls to ban the NPD.

The photographs were taken at a demonstration in Worms, a city in the western state of Rhineland-Palatinate, where right-wing extremists had gathered to mark the anniversary of the death of Rudolf Hess, Hitler's deputy. One photo shows a man carrying a banner reading: "Rudolf Hess -- we are thinking of you." Another photo shows Apfel standing directly behind the banner, while a further photo shows Zschäpe and Mundlos sitting on the ground in the front row of the group of demonstrators.

Recently, Apfel and his party have taken pains to distance themselves from the NSU. Apfel has described the trio as criminals who had no contacts in the far-right scene and absolutely none to the NPD.

That statement may seem strange, considering how close the NPD officials and members of the Zwickau cell were to each other on that day in August 1996. The state-level Interior Ministry in Rhineland-Palatinate announced on Tuesday that two of the Zwickau cell's suspected accomplices -- Ralf Wohlleben and a man identified only as Holger G. -- also took part in the Rudolf Hess memorial march, which had not been registered with the authorities. Wohlleben, a former NPD official, and Holger G. are both currently in custody on suspicion of having aided a terrorist organization. Several pictures show Wohlleben sitting directly next to Zschäpe.

According to Germany's domestic intelligence agency, the Office for the Protection of the Constitution, as many as 250 right-wing extremists from all over Germany took part in the neo-Nazi demonstration in Worms. Authorities believe about 50 of them were members of a group called Thüringer Heimatschutz ("Thuringian Homeland Protection"), which Zschäpe, Böhnhardt and Mundlos also belonged to.

At the demonstration, the police temporarily took more than 170 neo-Nazis into custody. Apfel was fined 2,700 deutsche marks (€1,380) for being one of the apparent leaders of the illegal demonstration.

In a statement published on the NPD's website on Wednesday, Apfel sought to play down the significance of the 1996 photos, arguing that the fact he had been at the same demonstration as the terrorists did not prove there was a link between the NPD and the cell. The statement referred to the publication of the photographs as a "character-assassination campaign by conspiracy theorists."

Informants in the NPD

Despite the NPD's efforts to distance itself from the Zwickau cell, there is evidence of a number of links between the party and the militant far-right scene. However it remains an open question as to how close ties between the NPD and Zschäpe, Böhnhardt and Mundlos really were. One such connection involves their alleged accomplice André E., who is suspected of producing the cynical video claiming responsibility for the murder series. André E. was arrested in November as he sought refuge with his twin brother Maik in the eastern state of Brandenburg. According to the 2010 annual report by the Brandenburg branch of the domestic intelligence agency, Maik E. was a local representative of the NPD's youth organization.

Other evidence of connections between the NPD and militant neo-Nazis can be found on the Internet. An anti-fascist blog called Gamma recently published leaked entries from a closed neo-Nazi Internet forum that appeared to show contacts between the NPD and violent neo-Nazis. One 2009 posting, allegedly written by Ralf Wohlleben, praised one neo-Nazi's suggestion to set fire to a police station in Dresden.

Should concrete evidence of links between the NPD and the terrorists emerge, it is likely to significantly influence the ongoing debate in Germany about a possible ban on the far-right party. Following Wohlleben's arrest on Nov. 29 on suspicion of helping the Zwickau cell, politicians from all sides of the political spectrum called for new efforts to ban the NPD.

Last week, German Interior Minister Hans-Peter Friedrich and his state-level counterparts agreed to set up a working group to collect material for legal proceedings to ban the party. Germany's Federal Constitutional Court -- the only institution that can outlaw a political party -- rejected a previous attempt in 2003 when it emerged that the domestic intelligence agency had a large number of paid informants within the party. The court argued that it was possible that the party's policies had partly been influenced by informants working for the intelligence agency. Experts believe the agency will have to deactivate most or all of the informants if a new ban is to have any chance of success. 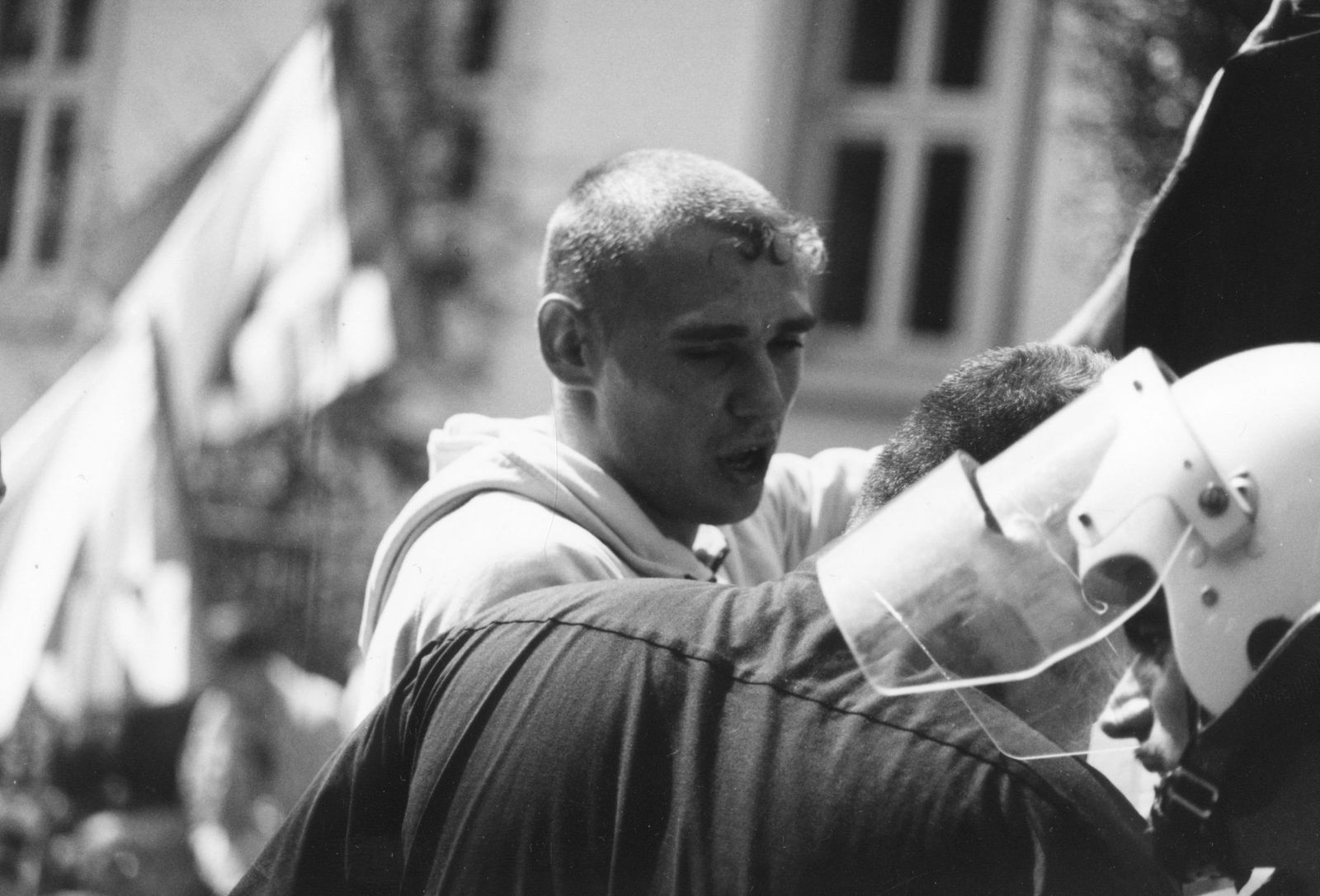 Here, one of the cell's members, Uwe Mundlos, is checked by police on the sidelines of the demonstration. Flags of the NPD's youth organization can be seen in the background.