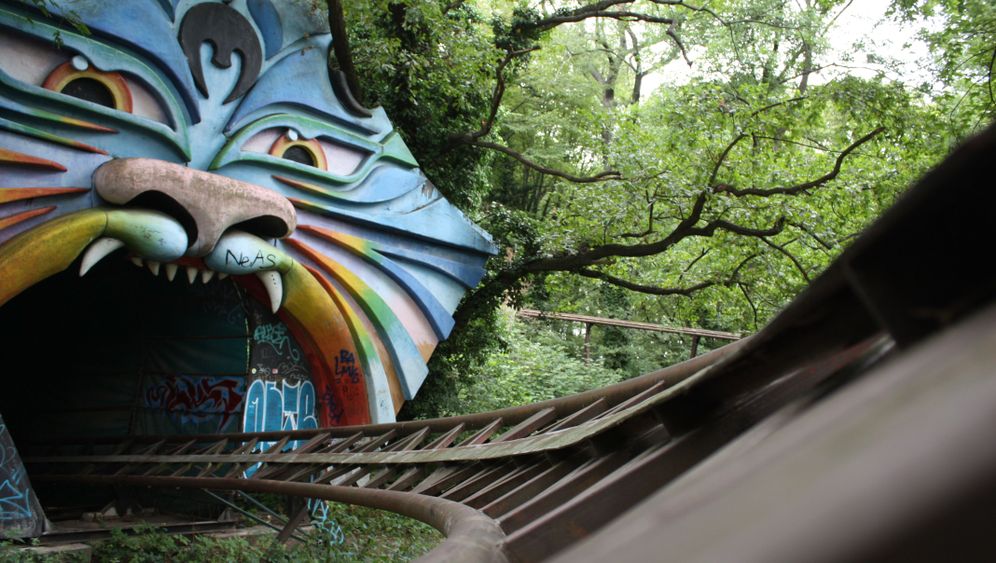 The monster is still there, though it's been a long while since it swallowed people whole. Trees and bushes have grown over the old roller coaster with the open-mouthed tunnel, and the plants are doing what others have failed to do so far -- slowly getting rid of the old rides at Berlin's defunct Spreepark. It's an amusement park locked in a deep slumber. But according to Sabrina Witte as she knocks on the steel tracks: "The electrical system just needs to be redone."

In jeans, flip-flops and hot pink lipstick, Witte is guiding tourists from New York and German families who are nostalgic for socialist East Germany. On Saturdays, Witte leads tours around former East Berlin's only amusement park, telling people about her childhood there. She and her siblings used to pull the electric cars off their tracks and race them through the park after closing time, she says. They also turned up the speed on the white-water ride at night.

"They just need an investor," one visitor says. But that hasn't been possible. The property has lain fallow since 2001. It's a complicated story for which no one wants to take responsibility, and one which involves dreams that were lost somewhere in a tangle of city regulations, bad luck, mismanagement and misunderstandings.

It began with the Wittes, a family of carnival workers from West Germany that was tasked with turning a former East German fairground into an amusement park up to western standards after reunification in 1989. The head of the company is Sabrina's father, Norbert Witte. The leasing contract for the 30-hectare (74-acre) piece of property was under his wife Pia's name, however. The agreement with the city-state of Berlin states that the land may only be used as an amusement park until 2061.

Some in the Berlin press are skeptical of this arrangement, however, and allege that the city government didn't monitor the management selection closely enough. By the mid-1990s, things were going poorly at the Spreepark, and visitor numbers were down. In 2001, the company declared insolvency and the Wittes moved to Peru, taking a few rides with them. There, Norbert Witte suffered a number of heart attacks and got involved with drug smugglers. In 2003, he and his son were arrested for attempting to smuggle 167 kilos of cocaine to Germany inside a ride called "The Flying Carpet."

Witte was caught in Germany, his son in Peru. The father was sentenced to eight years in prison and released after serving four. His son remains in Peru, where he is serving a 20-year sentence for the same crime. Today, Norbert Witte lives in a caravan in the Spreepark.

On a Sunday in August, he is sitting in Café Mythos, a snack counter run by his daughter on the grounds. Holding a black coffee in one hand and a cigarillo in the other, he ignores comments by two girls and their parents about a papier mâché gorilla behind him and talks about what the Spreepark used to be like. 1993 was a good year, he says. According to him, the Spreepark had the biggest roller coaster in Europe, and there was a Wild West town with stunt shows and tons of new investment. He's a man who likes to talk in superlatives.

But then things started going downhill quickly for the business. Witte feels that he has been hoodwinked by politicians. He claims that the city-state of Berlin retroactively declared the forested land around the amusement park part of a nature-conservation area, but city officials refuse to discuss the contractual relationships. "If we had known that, we wouldn't have ever invested here," Witte says. There was nothing about that in the contract, he continues, but the new decree didn't allow for the needed parking places, making it difficult to get to the Spreepark. "They deprived us of the foundation of the business," he says.

Witte is livid -- at the company that administers property owned by the city-state of Berlin for always opposing him, at the press for what he feels are false reports, at administrators for giving top city officials incorrect information and at the insolvency administrator for undervaluing a major part of the park rides. But what angers him more than anything is when he reads that the natural surroundings have "recovered a bit," saying: "I broke up the sea of concrete that was here myself, planted the greenery and captured frogs for the lakes."

That's Witte's version of the story. But, in the wake of the insolvency, the other side has also produced a long list of accusations. One says that Witte never realized his original concept but was always quick to pin the blame on others. It has also been said that he has been late with his rent payments, that he hasn't rehabilitated the "Eierhäuschen" ("Little Egg House"), a historically listed tourist locale on the grounds, and that hazardous waste has been found. But Witte rejects responsibility for almost all such accusations. On the contrary, he says that he has tried to revitalize the park -- but that, for some reason, his plans have always failed. Still, there is one thing he will admit to: "My wife and I didn't always see eye to eye on things," he says, referring to Pia, now his ex-wife.

Since 2001, the park has been abandoned to its fate. Over the years, dozens of people have popped up and expressed an interest in taking it over. But, at a certain point, the insolvency administrator turned it back over to the Wittes. For some years now, Sabrina Witte has been running the snack shop there in addition to offering guided tours. In early July, the city-state of Berlin allowed plans for a compulsory auction to fall through -- even though a Berlin-based concert organizer had offered almost €2.5 million ($3.3 million) for the lease. It would seem that city officials want to keep their hands on the property, most likely so that apartments can be built on the grounds.

Berlin has a reputation for having difficult contractual conditions. "There is no way I will be participating in this auction," says Roland Mack, head of the country's successful Europapark amusement park. Despite the fact that the Spreepark is being sold at a bargain price, Mack says that "the conditions related to nature protection, visitors and parking spaces are a big problem."

But the Berlin Senate, the city-state's government, doesn't seem to be doing anything about it. It declined to comment not only on the Spreepark's future, but also on the series of investors that have lost interest in acquiring it and the current contractual situation. An inquiry about the Pirate Party's demands to reveal the details of the contract also went unanswered.

No one wants to take responsibility for the downfall of Spreepark -- the acres of fallow land at the heart of the Plänterwald Forest. The park ruins are situated in one of Berlin's most desirable locations.

Perhaps the new millenium marked a turning point of sorts. For some, the Spreepark is a cult attraction -- for others, it is nothing more than a tacky remnant of East Germany. Perhaps the chaotic bureaucracy that existed in 1990s Berlin after reunification is to blame. Or maybe the idea of an amusement park in the increasingly trendy German capital is now considered out-of-date. It remains to be seen whether the park will be sold at a mandatory auction.

The Spreepark remains a photogenic adventure playground that attracts urbanites willing to jump the fence. Some are just curious, while others come with the intention of bringing back a hip souvenir. Several years ago, Sabrina Witte was forced to retrieve one of the park's swan boats from the nearby state of Brandenburg after thieves made off with the boat for a nighttime ride on the Spree River.

Like her father, Sabrina Witte wants to save the park. "If I won the lottery, I would buy the whole thing immediately," she says.