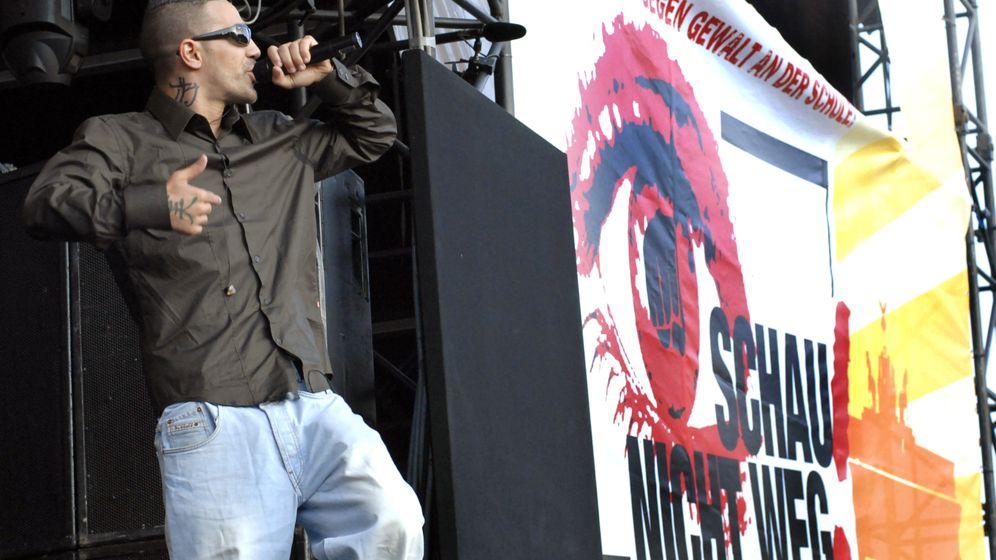 The new face of the Arab clan is unshaven. He has a broad and somewhat crooked nose, high cheekbones, a broad chin and full lips. One could say that Bushido is good-looking.

Is he also a scoundrel who has signed over his life, his money and his honor to the notorious Abou-Chaker Clan? Or is Bushido really just a music star who refers to women in excessively vulgar terms? At any rate, he is someone who, as the German magazine Stern discovered last week, has granted full power of attorney to Arafat Abou-Chaker, a member of a Berlin-based organized crime group with Palestinian-Lebanese roots.

Once again, pop culture is providing a more in-depth and extensive look at German realities. In fact, this is precisely its strength: to absorb reality and make it culturally accessible.

In the case of Bushido, it is the reality of integration, distributed across the two possibilities offered by popular mythology. There is the first version, which says: You go to school, stay away from drugs, complete an apprenticeship and get a job. In return, society will embrace and reward you.

And then there is the second version, the "Godfather" version: You meet and befriend people who have more money and fun than you would have ever thought possible. You realize that once you're a foreigner, you'll always be a foreigner, and that the majority will never accept you as an equal.

It appears that Bushido, 34, whose real name is Anis Mohamed Youssef Ferchichi, started off with the first version and ended up with the second one. His story is one of someone who was successfully integrated into German society, only to eventually land in a criminal environment.

What happened? Stern took research done by SPIEGEL TV one step further. It had long been reported that Bushido had ties to organized crime in Berlin. He had never denied it, neither in his autobiography nor in interviews. In fact, he did the opposite. "Of course we talk about the mafia principle here," he wrote, "La Famiglia, obviously."

Now documents have turned up showing that, in late 2010, Bushido transferred power of attorney over his entire fortune -- money, real estate, companies -- to the alleged leader of the Abou-Chaker Clan: Arafat Abou-Chaker, 37, who is apparently Bushido's best friend. Abou-Chaker's family has kept Berlin authorities on their toes, often in vain, with its involvement in the drug trade, human trafficking, pimping, extortion, money laundering and assault.

What's more, prosecutors in Berlin have revealed that they have been conducting a broad investigation of Bushido since last year, including for suspected tax evasion.

The Birth and Liberation of German Rap

The two men met when Bushido, the son of a single German mother and a Tunisian father, had his first success, his 2003 debut album "Vom Bordstein bis zur Skyline" ("From the Sidewalk to the Skyline"), and wanted to part with his record company. Abou-Chaker's thugs helped him get his wish.

The aim of the record label, Aggro Berlin, was to reinvigorate German pop music with German gangsta rap, which had never existed before. Elsewhere in the world, hip-hop is an art form that gives the children of immigrants a means of expressing their hunger for strength and wealth. But, in Germany, it was firmly in the hands of the white, German-born middle-class.

Indeed, Germany around the turn of the millennium was a completely different country than it is today. It was already home to millions of second- and third-generation immigrants, but they were still invisible and voiceless. Likewise, there were very few players of Turkish or Tunisian heritage on the German national football team.

At the time, the German media treated immigrants in much the same way they were treated in the popular soap opera "Lindenstrasse": It acknowledged their presence but identified them primarily as problem cases and generally the victims of social circumstances.

It was against this background that Berlin's so-called Krawall-Rapper (literally, riot rappers) began earning millions of euros around the turn of the millennium. But the rappers, Bushido, Kool Savas, Sido, B-Tight, Eko Fresh, Fler and others, are also accused of something else: that their lyrics glorify violence and are misogynistic, homophobic and sometimes even racist.

That's only half of the story. What many non-immigrant Germans find equally disturbing is the fact that these rappers are formulating their own images of their German dream, and that these visions are then being heard and finding an approving audience in the bedrooms of children in the country across the social spectrum. As far as these critics are concerned, this is not a welcome new element in the already complicated immigration debate.

The self-confidence with which they demand the right to lend a voice to a multicultural German underclass is their real strength. Bushido is neither the most talented nor the funniest of rappers in this community. But his story and art are compelling enough to attract international media attention, including a New York Times feature story. And he is undoubtedly the one who is most adept at both becoming and remaining a star in Germany.

He has marketed clothing, written an autobiography, appeared on talk shows and had a film made about his life, called "Zeiten ändern dich" ("The Times Change You").

He is now one of the heroes of a social class that captured cultural hegemony in the 2000s, found its audience with television channels like RTL II and defined its freedom with tattoos. It's also a group that responds roughly to the harsh way in which it feels treated by society.

This explains why there were protests when the Burda publishing company awarded Bushido its BAMBI award in the integration category in November 2011. In June 2012, he completed an internship in the office of Christian von Stetten, a member of the German parliament, the Bundestag, and chairman of the parliamentary panel on small and medium-sized businesses for Chancellor Angela Merkel's center-right Christian Democratic Union (CDU) and its Bavarian sister party, the Christian Social Union (CSU). According to research done by SPIEGEL TV, Baron von Stetten received a payment in the high six figures from a businessman who later posed for pictures with the Abou-Chakers at Bushido's wedding.

Indeed, it seemed like Bushido had arrived. He was now married to Anna-Maria Lagerblom, a former girlfriend of Mesut Özil, a football star with Turkish roots who plays on Germany's national squad.

Bushido wrote a song for the German soccer team, "Fackeln im Wind" ("Torches in the Wind"), to coincide with the 2010 World Cup in South Africa. At the time, the rapper told SPIEGEL: "I'm incredibly patriotic." When Bushido published his autobiography in 2008, he appeared for an interview wearing gray sweatpants, a leather jacket and a watch that he described as incredibly expensive. He was polite.

Only once in the interview did he become upset. He said that he had flown to the United States wearing a similar outfit and with hardly any luggage: A German with an Arab name, an expensive watch and tattoos. When going through customs at the US airport, he says he was detained for several hours, like a suspected criminal.

Since this day, Bushido said, he loves Germany even more.

Now Bushido is writing another book, with the working title: "Germany Will Make It." He says it will be a response to "Germany Does Itself In," a best-selling book published in 2010 by Thilo Sarrazin, a former finance senator for the city-state of Berlin, in which he accused Turks and Arab immigrants of sponging off the state and being incapable of integrating, among other inflammatory things. The book sparked a major debate about Muslims in Germany. In Bushido's book, scheduled for release in the coming weeks, the rapper gives his own account of how integration is really going in Germany.

Perhaps this is why the case of Bushido is so incredibly disturbing. The integration debate is probably Germany's most important conversation on understanding itself since reunification. It deals with people, with belonging and with identity, and with understanding one's place in society.

And now the poster boy for integration is the once again the bad guy. Or perhaps it's the other way around: The man who seems to confirm the prejudices that many Germans hold about supposedly criminal immigrants writes a book about integration. It's disorientating, to say the least.

"No matter how antisocial you are," Bushido said in 2010, "in Germany, you still know which rules you have to obey."