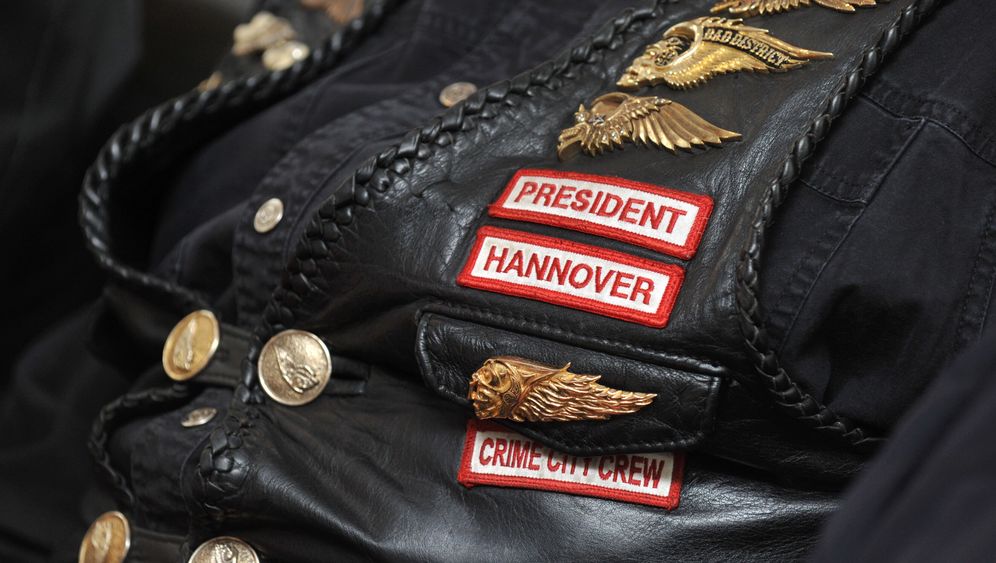 It's easy to reach the biker on his cell phone, which is surprising, given his reputation and celebrity status -- and the fact that quite a few police investigators view him as the head of a criminal organization.

Of course Frank Hanebuth, 47, a former boxer, local celebrity and president of the "Hannover Charter" of the Hells Angels biker organization, would prefer to say nothing. He would much rather allow the myths surrounding this men's society to speak for themselves -- the clothing, the militaristic patches, the intimidating symbols.

But silence is no longer an option, not since 5 a.m. on May 24, when members of a German GSG-9 special forces unit roped down from a helicopter above his fortress-like house, shot his Anatolian sheepdog, handcuffed Hanebuth and, during the ensuing raid, seized two laptops, a handful of mobile phones and a few decorative rifles. And silence certainly isn't an option since a star witness told a German court last Thursday that Hanebuth hired him to murder a troublesome rival in the northern German city of Kiel.

On the phone, the biker boss calls the claims made by the witness, former biker Steffen R., nothing but fantasy. He is still audibly upset about the police raid on his property, the death of his dog and the fact "that my 11-year-old son had to see it all." In contrast, he coolly rejects the murder-for-hire accusation, saying that he doesn't even know Steffen R. or Tekin Biçer, the alleged Turkish-born murder victim.

And what about the claim made by the star witness that as a reward for the murder, a Hells Angel was allowed in Hamburg to establish his own charter, the term the organization uses to describe their local groups? "It's all nonsense," says Hanebuth. There was never a contract killing, nor were any such orders issued in Kiel. "I'm the president of Hannover, and that's all," he says. The alleged murder was used as a pretext, says Hanebuth, but the real goal was to "make accidental discoveries to support an effort to ban the organization."

In truth, what is at stake at the moment is not just Frank Hanebuth, the colorful owner of a security company, a real-estate management company and two brothels, but the very existence of the Hells Angels in Germany. Its will depend on whether the star witness, a man with a criminal past, told the truth.

Breaking the Code of Silence

Steffen R., 40, accused of procuring, extortion and assault -- charges he overwhelmingly denies -- complied with the bikers' code of silence and said nothing during his eight months in pretrial detention. But in mid-February R., the former leader of "Legion 81," a Hells Angels auxiliary group, started talking. He revealed details on the biker gang's illegal business dealings, about prostitution, drugs and protection money -- and about alleged contract killings.

The ex-convict from the eastern German state of Saxony-Anhalt was questioned about 12 times. He told investigators about a second contract killing that Hanebuth had allegedly approved, although it was not mentioned in court last week. According to R.'s statements, Hanebuth had given the "green light" to kill the leader of the Tigers biker gang, a man named Hakan. R. claimed that Hanebuth had said that it was to be done in such a way as "not to attract a lot of attention." Three Hells Angels members were then given orders to spy on Hakan. However, Steffen R. could not say why the murder plan was not carried out. Hanebuth also characterizes this accusation as "complete nonsense."

The star witness's extensive testimony led to the massive police strike against the Hell Angels on May 24. In a major operation, some 1,200 officers raided bars, brothels and apartments in northern Germany. On the outskirts of Kiel, experts used heavy equipment to search a warehouse where, according to R., the body of Tekin Biçer, who had disappeared, had been buried in the concrete foundation. The public prosecutor's office is conducting about 200 investigations against 69 defendants.

So far, no insider has come clean to the extent that R. did. His statements sharpen the authorities' focus on the Hells Angels, and they support the theories of investigative authorities, if they are indeed true. According to those theories, the bikers form a hierarchically structured organization not unlike the mafia.

For years, Germany's Federal Office of Criminal Investigation (BKA) has noticed that bikers are increasingly involved in cases of organized crime. They now control the red-light districts in many cities. And in places where they are not yet in control, they use brutality, and weapons like machetes, axes and firearms, to expand their influence.

According to BKA Vice President Jürgen Stock, the Hells Angels show "a high potential for violence and brutal clashes, even in public spaces." The police have regularly found pistols, hand grenades and explosives during searches.

An internal BKA report finds that the four largest German biker clubs -- the Hells Angels, Bandidos, Outlaws and Gremium -- count more than 3,500 members. The gangs try to cover up their criminal dealings, say the investigators, with supposedly clean companies, such as security companies, bars and brothels. Security companies, in particular, are often used in protection rackets, say the report's authors.

The bikers like to portray themselves publicly as tough guys with soft hearts. Hanebuth, for example, has been a guest at gentleman's evenings hosted by Hannover celebrity attorney Götz von Fromberg, parties attended by local notables like Carsten Maschmeyer, Michael Frenzel and former Chancellor Gerhard Schröder.

Cultivating ties with politicians and business leaders is part of the concept, while donations to social causes are a helpful public relations tool. The Bandidos, for example, handed a check to a pediatric cancer organization in front of the Brandenburg Gate in Berlin, while the Hells Angels have donated money to organizations supporting Alzheimer patients. BKA Vice President Stock calls this pure camouflage, saying: "These are extremely unsettling characteristics of organized crime."

Investigators have also noticed a "massive pressure to expand" into Southern Europe among some Hells Angels groups. According to the European police agency Europol, there are efforts underway on the so-called Balkan route, a classic path for heroin coming into Central Europe, to start new groups in countries like Croatia, Serbia, Albania and Turkey. The EU authorities believe that the bulk of the profits from the drug trade are deposited in Swiss banks.

Europol has been gathering information about bikers, which it calls "outlaw motorcycle gangs," for more than 10 years. Officials say that biker gangs count their largest membership in Germany. According to Europol, 64 percent of all bikers have criminal records. "In almost every house search, the police find weapons and drugs," reports an official at Europol headquarters in The Hague.

Europol's conclusions coincide with the investigations by Berlin authorities, which recently lead to the banning of the "Hells Angels Motorcycle Club Berlin City." According to the official order banning the club, anyone who got in the way of the bikers' business dealings was "eliminated through attempts at intimidation or, if necessary, with violence that led to serious injuries and even death."

According to the State Office of Criminal Investigation (LKA), the authorities could have -- and should have -- taken action against Kadir P., the future head of the gang, as long ago as 2008. A source at the LKA says that a bill to issue a ban on the biker gang already existed at the time, but it never made it past the internal administration of the city-state's senate.

Hells Angels members claim that they have known about the senate's preparations for a ban since February. The fact that they were told in advance about the timing of a raid in Berlin last week, so that police ended up raiding empty premises, was the high point of an apparently long-standing, productive relationship between the bikers and corrupt officials.

The circle of suspects is large. There are two special commissions at the LKA that handle biker crime, but a leak in the administration or judiciary also cannot be ruled out.

The chumminess between biker gangs and the police is also glaringly evident elsewhere. Some police officers are apparently very attracted to the motorcycle gangs, with their rituals and uniforms, their insignias and macho behavior. In 2010, authorities in the western city of Essen investigated an officer with the criminal investigation department who had allegedly given the Bandidos information from his office computer.

That same year, five officers were suspended in Frankfurt, including a 50-year-old first senior commissioner with the LKA, because they had allegedly sent internal information to the Hells Angels. Two defendants were even accused of dealing in drugs. In another case in Berlin, the police found a note during a search that read: "You don't have to kick down the door. It's open."

According to star witness Steffen R., three officials in the northern state of Schleswig-Holstein -- one each from the police, the prison system and the Kiel city administration -- helped the Hells Angels with their business dealings. State Interior Minister Klaus Schlie is outraged over the "lengths that the bikers went to infiltrate government structures."

Schlie was the first German cabinet minister in many years to introduce a motion in 2010 to ban the Bandidos and the Hells Angels. Some of his counterparts in other German states took a dim view of the dynamic, down-to-earth and fearless Schlie. But a conference of state interior ministers last Thursday, Schlie noted with satisfaction that there was a new receptiveness among his counterparts. Impressed by the statements of the star witness, a number of state interior ministers are now thinking about changing their tune. Schlie is even taking things a step further, saying: "If suspicions are borne out in the current trials that the bikers constitute a criminal network, and that certain individuals are assuming leadership positions in these criminal structures, it will be time to think about a nationwide ban."

Experts are increasingly skeptical that the fight against the lawless gangs can be waged successfully, in light of the intricacies of state bureaucracies. The chairman of the Association of German Police Officers (BDK), André Schulz, is convinced that a nationwide phenomenon like biker gangs also needs to be "centrally investigated."

For Schulz, the most recent accusations against Frank Hanebuth show that the local or regional charters are not nearly as independent as claimed, and that a concerted intervention by federal security agencies could make sense.

Just how powerful Hanebuth really is, and how far his interest reaches, became clear in May 2010. In the law office of his friend and attorney, Götz von Fromberg, Hanebuth made a big fuss about sealing a nationwide peace treaty with Bandidos leader Peter Maczollek. The handshake between sworn enemies was binding for all Hells Angels in Germany, and it also sealed the agreement not to establish a new charter for a year.

The search for the body that was allegedly embedded in concrete will continue this week. Interior Minister Schlie refuses to back down, and he is convinced that the star witness is reliable. In one detail, however, his investigators have had to explain to him that Steffen R. was apparently wrong. The star witness had testified that another biker was allowed to form his own charter in Poland to help solve the suspected murder of Tekin Biçer.

When the biker gang celebrated its newest charter with much fanfare on April 10, 2010, Tekin Biçer had not disappeared yet. That happened 20 days later.Also attending the party were two bikers who still accuse each other of lying today: Steffen R. and Frank Hanebuth.