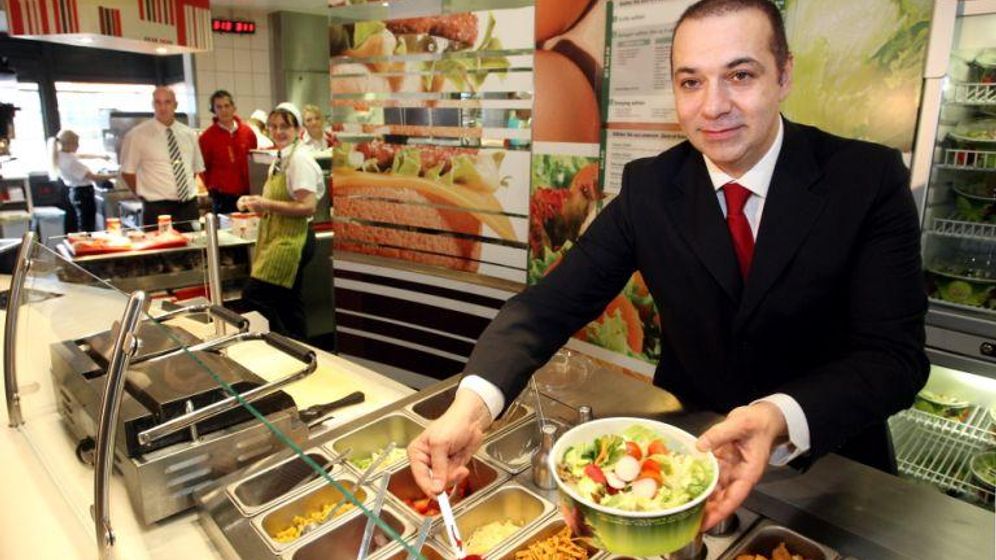 There's a hint of the smell of deep-frying fat in front of the McDonald's restaurants, even though such odors are not supposed to be detectable. "It's the filters," says Ulrich Enzinger, "it's time to change them again." The odor isn't very strong, but 49-year-old Enzinger has a keen sense of smell, honed by 18 years of experience at McDonald's.

One of his restaurants was in Lindau, a town on Lake Constance in southwestern Germany, in a prime location adjacent to the on-ramp for the autobahn to Munich. Unnerved, he gave up the business a year ago.

The restaurant is busy on this Monday morning, as Enzinger parks his car in one of the few empty spaces, locks the door and walks toward the entrance. Suddenly a dark sedan pulls up next to him, the passenger window opens and a voice says: "You are barred from the premises. Please leave."

Many of the company's franchise operators are at odds with management. They feel that they are being spied on and put under pressure or, as Munich attorney Horst Becker puts it, "systematically forced out." In the last few years, Becker alone has represented two dozen McDonald's franchisees.

The list of accusations is long and includes manipulation during restaurant inspections, harassment and targeted spying. The company even hired detectives to spy on a Frankfurt franchisee it didn't like, and one case is even under investigation by the public prosecutor's office in Munich. With a network of McDonald's restaurants in German that has grown even denser than that in the United States, the company is emphasizing efficiency these days rather than growth.

Attorney Becker speculates that McDonald's hopes to get rid of franchisees -- its independent business partners who pay a fee to operate one or more restaurants -- as cheaply as possible. The goal, at least according to company documents, is to reorganize the market so that fewer franchisees operate a greater number of restaurants.

But it isn't quite that easy. The franchise agreements are concluded for the long term, generally with 20-year contracts, and in many cases the restaurant operators have invested millions, making buyouts potentially very expensive. It's cheaper for the company to find ways to terminate its existing agreements.

Help from a Former Stasi Informant

Enzinger learned this the hard way. In 2005, he met Bernd R., the man in charge of the McDonald's market in southern Germany. R. had some unusual experiences under his belt. As a cook in the National People's Army of communist East Germany in 1980, he spied on fellow soldiers who had been stealing preserved fruit from the regiment inventories. Officials at the Ministry for State Security (Stasi), East Germany's secret police, were so impressed by the soldier that they recruited him as an informer. His code word for establishing contact with the Stasi was "Gulaschkanone," German for field kitchen). "Intellectually speaking," his managing officer commented, R. was qualified to "complete operational tasks."

"Roland," as he was also known, then started his career -- first as an employee in the central council of the Free German Youth (FDJ), East Germany's official youth organization, and later as a restaurant manager for one of the main organs of the East German regime. He had plenty to report during the latter assignment. "The candidate said, without hesitation, that he intended to continue supporting the MfS (Ministry of State Security)," one Stasi report stated. From then on, "Roland" reported internal information from the waiters working in the government restaurant. He met with his managing officer for the last time on Nov. 23, 1989, two weeks after the opening of the Berlin Wall.

R. admits that he worked for the Stasi, but he insists that he did it because he was "put under pressure by supervisors and employees" at the secret police. He also claims that he reported "nothing but banalities" to his managing officer. McDonald's had also been made aware of R.'s past as an informer after it received an anonymous letter. According to a McDonald's spokesman, the company then gained access to the official files, with R.'s permission, and had attorneys review them. They apparently concluded that his Stasi past didn't pose a problem.

It appears that R. attended to associates who had fallen out of favor at company headquarters in Germany. One of them was Ulrich Enzinger, who was operating five restaurants at the time. Business was booming, and he was sending millions in franchise fees to the Munich offices every year. Nevertheless, he was apparently a thorn in the side of the McDonald's family of restaurants.

'These Are Stasi Methods'

That may explain why R.'s inspectors, dubbed "field consultants," acted more meticulously than usual when they began paying visits to Enzinger's restaurants. They found plenty to criticize, from the menu photos on the counter next to the cash registers, which weren't being displayed in accordance with company rules, to excessive waiting times at the register.

R. apparently paid personal attention to one of Enzinger's restaurant managers. The former Stasi informer used a McDonald's cruise in the western Mediterranean to get to know the woman. The company had booked a cruise with AIDA, a German cruise line, to reward deserving restaurant and district managers for their performance. For R., it was apparently a good opportunity to develop a closer relationship with Enzinger's restaurant manager.

R. apparently met with the woman several times after the cruise. Enzinger suspected nothing at first and continued to rely heavily on the woman, who was his most important employee. "I trusted her implicitly," he says today. "We had no secrets when it came to business matters."

On Oct. 27, 2006, Enzinger was summoned to Munich for a meeting. The man sitting on the other side of the desk was R., who, as Enzinger recalls, wasted no time in getting to the point. The results of the inspections, R. said, were clear enough, and they constituted violations of the franchise agreement. According to Enzinger, the McDonald's employee told him that he wouldn't have any trouble selling his restaurants. He also pointed out that he wasn't management's "watchdog." R. disputes Enzinger's account.

Enzinger was perplexed. He had in fact referred to R. as management's watchdog, but it was in a private conversation with the female restaurant manager. "These are Stasi methods, I thought to myself at the time," Enzinger, who has a background in hotel management and a degree in business, recalls. He spent the next two years fighting for his restaurants, but eventually became so demoralized that he simply gave up.

According to a McDonald's spokesman, Enzinger violated "the restaurant management guidelines." R., says McDonald's, "had discussions with Mr. Enzinger to bring about improvements," which led to "a mutual agreement on the sale of the restaurants." The Enzinger case is by no means symptomatic of the company's relationship with franchisees, says the spokesman, who insists that there is no strategy to force franchisees out of their agreements.

But the company doesn't seem to be taking the reports as calmly as the spokesman's response might suggest. Bane Knezevic, President and CEO of McDonald's Germany, apparently alarmed by SPIEGEL's inquiries, recently went on the offensive. In an interview with the Frankfurter Allgemeine Zeitung newspaper, Knezevic admitted that mistakes had been made. He said that the company's hiring of detectives to investigate a franchisee was an "absolutely isolated case, and I was only made aware of it after the fact." Knezevic denied the claims of manipulation of inspection results, saying that these complaints were the result of "communication problems and not deliberate manipulation."

But these so-called isolated cases are enough to fill entire file folders in the office of Munich attorney Becker. His clients include franchisees from all over Germany -- mostly from the southern part of the country, but some of the cases occurred in the states of Hesse and Thuringia in the east and in Hamburg and Schleswig-Holstein in the north.

'They Wanted Me to Spy on My Boss'

Another franchisee who was apparently targeted by the McDonald's German headquarters was Matthias Koerber. Like Enzinger, Koerber, a native of northern Bavaria, had a long history with the fast-food chain. He was already flipping burgers and filling French fries into bags at 18, and in 1993 he acquired the franchise for a restaurant in the Bavarian town of Bad Neustadt. Nine years ago, he added a restaurant in nearby Bad Kissingen.

Andrea Kappel, who worked as a manager in the Bad Kissingen restaurant, had apparently been approached on Dec. 16, 2008 to help provide McDonald's information it needed to get rid of her boss. A field consultant from R.'s team had invited Kappel to a meeting in a café, supposedly to discuss her career opportunities at McDonald's. According to Kappel, however, the inspector was only interested in discussing invoices, work schedules and Koerber's legal troubles. "They wanted me to spy on my boss," she says. But she refused, grabbed her purse and abruptly left the café.

From then on, the inspectors began turning up in Koerber's restaurants more and more often. According to several affidavits the Munich public prosecutor's office has obtained from Koerber's employees, the inspectors spent months taking apart the business.

On Jan. 15, 2009, the field consultant and a coworker spent an entire day in the Bad Kissingen restaurant. During the course of the day, the inspectors objected to one employee's tattoos and another worker's shoes, and complained that one worker was too well dressed while another looked too unkempt. As they were leaving, they told Kappel, the restaurant manager, that she ought to be demoted to shift manager, because she was "apparently not up to the requirements."

During subsequent visits to a Koerber restaurant, the McDonald's inspector found fault with a broken icemaker, questioned whether the restaurant was in compliance with the required schedule for replacing the deep-frying fat, and had the freezer locked temporarily, even though it was a hot July day. When a new delivery arrived that evening, the frozen goods were left outside in the hot sun for 10 minutes. The McDonald's inspector promptly pulled out a thermometer and took a temperature reading: -13.8 degrees Celsius (7 degrees Fahrenheit), which was too warm, by company standards. The product, he said, therefore had to be considered spoiled. "It was harassment and pure manipulation," says Koerber.

To make sure that he would have sufficient evidence of these methods in the future, Koerber videotaped the inspectors during subsequent inspections. McDonald's responded by seeking a court order to prohibit him from videotaping, because it was allegedly an "infringement of personal rights." Koerber's contract with McDonald's has since been terminated without notice.

While Koerber continues to fight for his restaurants, Bernd R., the manager of the McDonald's southern German market, no longer works in inspections. He now operates three thriving restaurants in Bavaria that the company had offered to him.