The investor sent his excavators in at dawn. Just before Easter, they removed parts of the world-famous East Side Gallery, the longest remaining stretch of the Berlin Wall. There, in the former death strip between East and West Berlin along the Spree River, he plans to build a luxury apartment building.

When Petra Meier saw the headlines at a newsstand while on a short holiday in the German capital, she caught sight of the investor's photo and recognized him immediately. "That's Maik!" she said.

She had shared an office with Maik Uwe Hinkel at the city administration in the East German city of Zwickau during the 1980s. Then, after reunification, Meier found minute details of their time together in files about her kept by the Stasi, East Germany's feared secret police. The files included entries about discussions during breaks and notes she had left behind on her desk, all compiled by a "Jens Peter," the code name used by an "unofficial employee," as the organization's paid sources were known.

The documents suggest that Hinkel was the Stasi agent, a suspicion that will only heighten the outrage in Berlin, where protests of his upscale development project have been ongoing for weeks. Critics say they don't want the city's history to be shoved aside by business interests and gentrification, and have planned yet more demonstrations for this week.

Could a Stasi spy, of all people, be behind the controversial construction project? In Petra Meier's case, a tape of a verbal report from June 1986, along with other documents, contribute to this suspicion. They focus on a potential successor for Meier. "Jens Peter" reports that the head of Zwickau's city council had a discussion "with me" about the position held by "Meier."

"He proposed that I take over … the area of responsibility. In turn, I would be relieved of assignments that are in my view not in the interest of the MfS," the informant said, referring to the Ministry for State Security, commonly referred to as the Stasi. Hinkel ultimately ended up taking over Meier's duties.

For Andreas Richter, who was a student and good friend of Hinkel's at the time, the records tell a clear story. On May 1, 1985, Richter, a Catholic, even served as a witness to Hinkel's adult baptism in the "Holy Family" parish. Two days later "Jens Peter" informed the Stasi of the baptism, Richter learned from the files.

A call to "Jens Peter's" former case officer in Zwickau reveals that he now earns his money as an investment advisor. During the communist East German era, though, he wrote his university thesis about the exemplary work of the same man who spied on Richter and his friends. The title of the paper, finished in 1988, was: "Experiences and Problems in the Long-Term Development and Operations of an Unofficial Employee among Reactionaries in Church Circles."

After repeated inquiries, the former Stasi officer admits to having known Hinkel. "I knew him for a short while. That could be," he says.

But where did he know him from? "That is all in the files. What is it that you want from me?" he asks. The answer is more information on Hinkel, who is a controversial figure because of his decision to remove parts of the landmark East Side Gallery, which features iconic murals from artists around the world and has become one of Berlin's most popular tourist attractions.

"I can't do anything about it if he is controversial 30 years later," he says, not exactly a convincing denial.

Hinkel's lawyer Carsten Wegner, however, vehemently denies that his client was the informant "Jens Peter." He declines, however, to answer questions about the baptism incident.

Hinkel himself is less secretive and talks freely about his leftist political leanings. He reveals that he was a candidate for the Socialist Unity Party (SED), the East German communist party that was dissolved after the Wall fell. He is also still a member of the far-left Left Party, he says.

He avoids, however, being too open about his roots in the anti-capitalist milieu. "I didn't want to unsettle my clientele too much," he says. 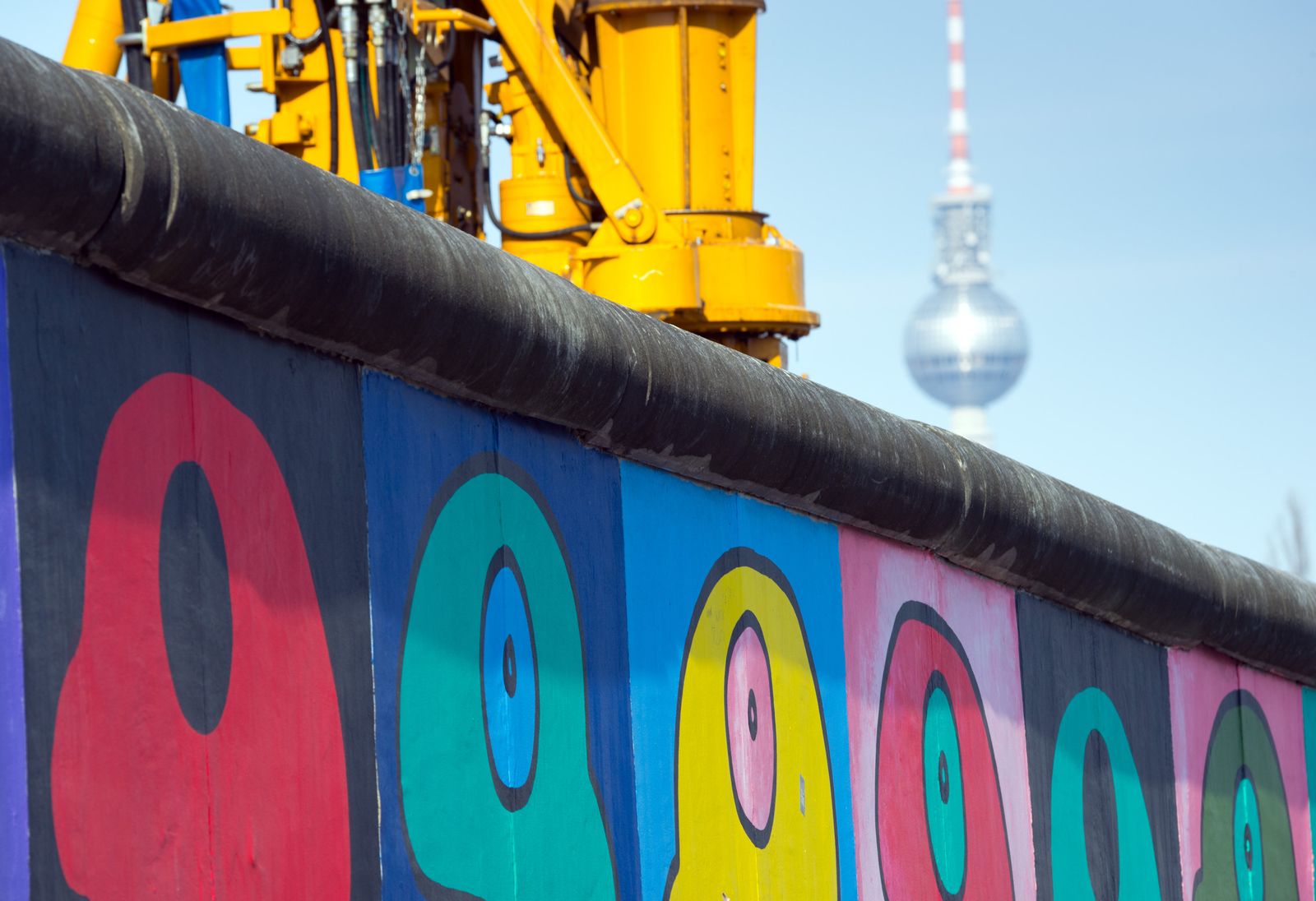 A piece of construction machinery next to the East Side Gallery, the longest-surviving stretch of the Berlin Wall.