Klaus Wowereit looks set to serve a third term as Berlin mayor after his party, the center-left Social Democrats (SPD), emerged as the strongest force in Sunday's elections in the city-state of Berlin.

According to preliminary final results, the SPD received 28.3 percent of the vote, down from the 30.8 percent they won in the last election in 2006. The SPD was still well ahead of the second-strongest party, the center-right Christian Democratic Union (CDU), which got 23.4 percent, a slight increase over their 2006 result of 21.3 percent.

The Green Party came third with 17.6 percent of the vote, a big jump from the 13.1 percent they won in the last election. The Greens would be the SPD's preferred partner to form a coalition government, and the two parties together would have a narrow majority. The SPD could also form a coalition with the CDU.

A continuation of the current coalition government, which pairs the SPD with the far-left Left Party, is out of the question in any case. The Left Party fell to 11.7 percent from 13.4 percent.

But the clear winner of Sunday's election was a relatively new party which will now be represented in a German state parliament for the first time. The Pirate Party, which campaigned on a civil liberties platform with a focus on Internet freedom, got 8.9 percent, leaping over the 5 percent hurdle needed for representation in parliament.

In contrast, the liberal, business-friendly Free Democratic Party (FDP) suffered another in an ongoing series of heavy election defeats, getting less than 2 percent. In 2006, they won 7.8 percent. The FDP will no longer have any seats in the Berlin state parliament. The setback comes just weeks after a similarly disappointing result in the Mecklenburg-Western Pomerania state election. The Berlin result is likely to exacerbate the party's ongoing crisis.

Turnout in Sunday's election appeared to be up slightly, according to projections, from 58 percent in 2006 to around 59 percent.

Despite their victory, the result was disappointing for the Social Democrats, who had hoped to win at least 30 percent of the vote. "I'm a little sad," commented Wowereit at the SPD's election party on Sunday night. Observers attributed the SPD's victory largely to Wowereit's personal popularity. The victory gives a boost to the Social Democrats, who have recently notched up a number of good performances in state elections, following their disastrous showing in the 2009 national election. On Sunday night, Wowereit announced he wanted to hold exploratory talks with both the Greens and the CDU regarding a possible coalition.

The Greens' leading candidate, Renate Künast, who at one point had been seen as standing a chance of toppling Wowereit, showed mixed emotions on Sunday evening. "We wanted to get more, and we did not achieve all our goals," she said. However the Greens were clear about wanting to govern in coalition with the SPD. "We want to help shape Berlin's future," Künast said.

FDP General Secretary Christian Lindner prescribed a "period of reflection" for his party after their bitter defeat. "I recommend that we accept the result in a spirit of humility," he said. He cautioned against any kneejerk responses, saying that the party should calmly analyze the reasons for their poor performance before taking the necessary action.

The Pirate Party's leading candidate, Andreas Baum, admitted that his fledgling party had "not expected" such a sensational result, adding that the people of Berlin clearly wanted a change in the city's politics. He also said that the Pirate Party's politicians would first have to learn the ropes as members of the city-state parliament, given their lack of experience. "But you will be hearing from us," he said. "You can count on that." 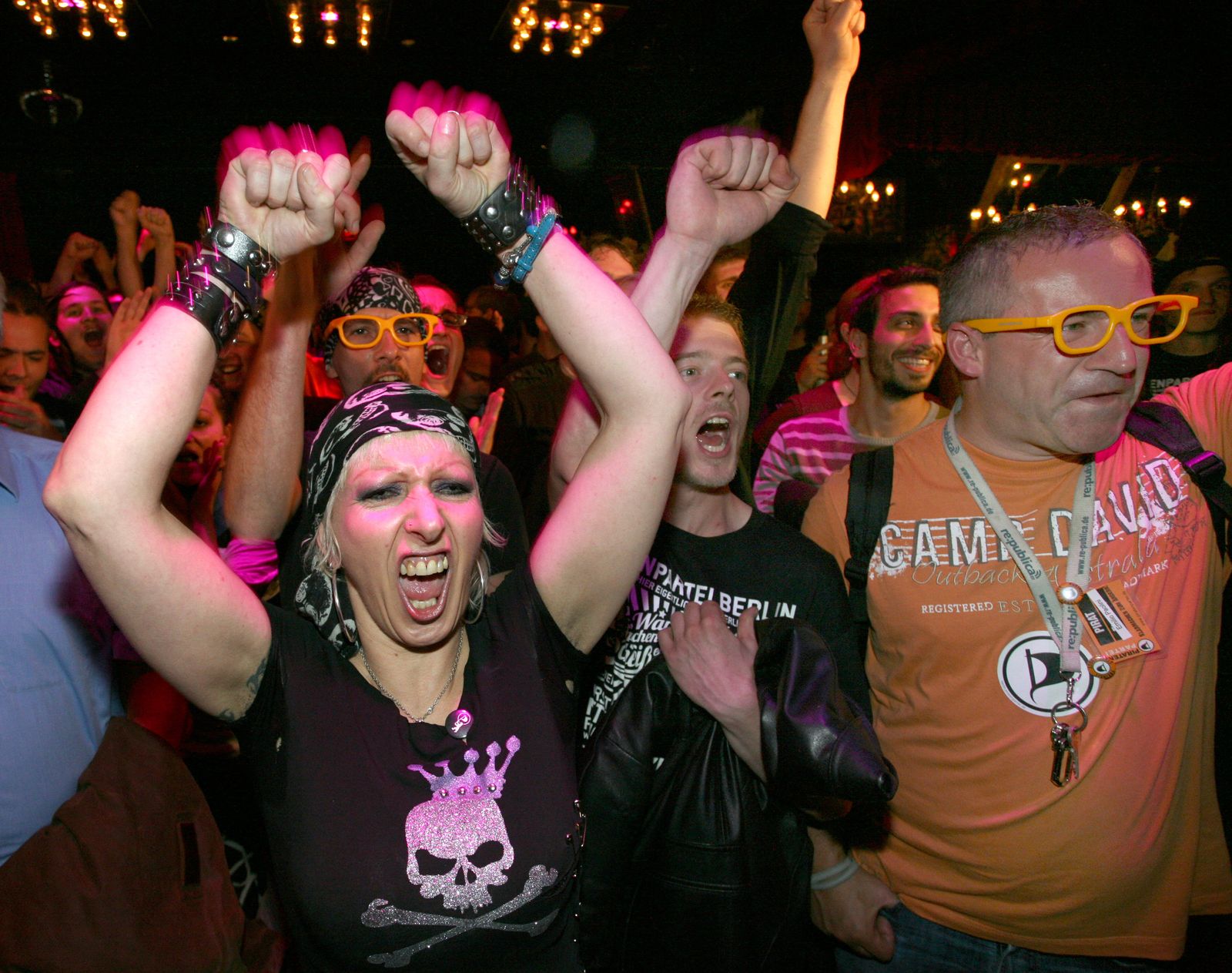 The Pirate Party, which advocates Internet freedoms, has won seats in a German state parliament for the first time after getting around 9 percent of the vote. Here, members celebrate on Sunday evening.