In the United States, it is the hamburger test. When hitting the stump in rural backwaters, American political candidates have little choice but to grab on with both hands and sink their teeth into a juicy burger. It is, after all, one of the few tricks available to politicians, aside from cuddling the odd baby or two, to demonstrate just how human they really are.

In Germany, the analogue is the bratwurst test. And Norbert Röttgen, the lead conservative candidate in Sunday's crucial regional vote in North Rhine-Westphalia, has been failing it. A slick political operator, Röttgen is both the German environment minister and the deputy head of Chancellor Angela Merkel's Christian Democratic Union (CDU). But with personality increasingly trumping policy in Germany's fast changing political landscape, Röttgen's aloof political style has not played well in small-town Germany. And with an increasing number of parties for voters to choose from, North Rhine-Westphalia threatens to become the latest in a series of regional election setbacks for Merkel and her conservatives.

"The Sunday vote will be an election of personalities," Wolfgang Muno, a professor of German politics at the University of Erfurt, told SPIEGEL ONLINE. "It is the Americanization of politics … and it could very well be indicative of a new model and a new political culture in the country."

Germany's political power structures are changing rapidly. Whereas the CDU and the center-left Social Democrats used to dominate elections both regional and national -- with the business-friendly Free Democrats (FDP) often serving as kingmaker -- the party landscape is now crowded, with the Greens and the Left Party vying for attention on the left. More importantly, the up-and-coming Pirate Party has recently injected a significant degree of unpredictability into regional elections, making two-party coalition governments increasingly difficult to assemble. Surveys suggest that North Rhine-Westphalia, Germany's most populous state, could provide yet the latest proof of that trend.

"NRW is very important," Muno says, using the common abbreviation of the state's name. "We are very likely to see new constellations that we haven't seen before. It could very much be a trend setter for national elections."

The move toward coalition confusion has been on full display this week as politicians in the northern state of Schleswig-Holstein have spent the week trying to make sense of results from last Sunday's election there. Six parties are to be represented in state parliament and, for the moment, the most likely coalition government would see the SPD pairing up with the Greens and the tiny SSW, the party of the state's Danish minority. Even though the CDU got the most votes, the conservatives will likely be on the outside looking in.

Polls indicate that five parties, including the Pirates, are likely to leap the 5 percent hurdle for entering into parliament in North Rhine-Westphalia on Sunday. Just what the resulting governing coalition might look like is anybody's guess. But with the CDU polling just 30 percent this week, it isn't likely that Merkel's party will be leading it.

For Röttgen, though, it is the trend toward personality-based politics that has been his downfall. While he managed to successfully choke down a bratwurst at a recent campaign appearance in the tiny town of Netphen, the candidate has been having significant problems demonstrating that he is a man of the people. Just 20 percent of voters believe he is more likeable than his primary opponent, the state's popular current governor, Hannelore Kraft of the SPD. Just over 10 percent believes he better understands the problems facing citizens of the state, according to an April poll. (See above graphic.)

A key problem has been the perception that his heart isn't in the campaign. Long an up-and-comer in the CDU, Röttgen has made no secret of his ambition to one day become chancellor. When Kraft won state elections in North Rhine-Westphalia in 2010 over the CDU incumbent Governor Jürgen Rüttgers, the professorial Röttgen had hoped that he would be able to stay in Berlin and keep his hands clean of his home-state politics.

Tripping Over His Tongue

Kraft's election victory, however, was hardly decisive and she resorted to assembling a minority government with the Greens, one whose survival depended on issue-by-issue support from the opposition. The arrangement, a novelty in Germany and likewise a function of the country's newly confusing party landscape, didn't last. In May, Kraft failed to push through the state budget and new elections were called. Röttgen had little choice but to pick up the CDU gauntlet in the state.

But he hasn't fared well. Throughout the campaign, he has been coy about his plans should he lose the elections, with many saying that his apparent reluctance to leave Merkel's cabinet to lead the CDU into opposition in state parliament shows a lack of commitment to the state.

And this week, Röttgen has twice tripped over his tongue. Well behind in the polls, Röttgen made a blatant grab for Merkel's coattails, insisting that the North Rhine-Westphalia vote was nothing less than a referendum on Merkel's austerity-driven push to save the euro, which is widely supported in Germany. Many in his party were furious and Merkel quickly moved to disassociate herself from Röttgen's floundering campaign, saying "the election on Sunday is an important state election for North Rhine-Westphalia, nothing more and nothing less."

Then, on Tuesday evening, the CDU candidate gave away the shop. During a live television interview, Röttgen was asked: "If you, as leader of the state CDU, want the best for your state, then shouldn't you go into the opposition if you lose the election?" Röttgen waffled, saying "yeah, well, no I wouldn't have to, I mean, I should really be elected governor." Bad enough perhaps. But then he added: "Unfortunately, it's not just the CDU that makes that decision, but also the voters."

'The Americanization of Politics'

It is the kind of Rick Perry-esque flub that is all too familiar to American observers of the Republican primaries. And the German press feasted on it on Tuesday, further decreasing Röttgen's chances for success on Sunday.

Kraft, for her part, is no doubt enjoying the show. Should the SPD emerge with the strong showing polls are predicting, she could suddenly have significant leverage in the party on the national stage, says political analyst Muno. That is particularly true given that the party's recent struggles mean that many senior SPD leaders have been tainted by ballot box failures in recent years.

Plus, Kraft is immensely popular. "Elections are being reduced to people and what they represent," Muno says. "Issues play a much smaller role." 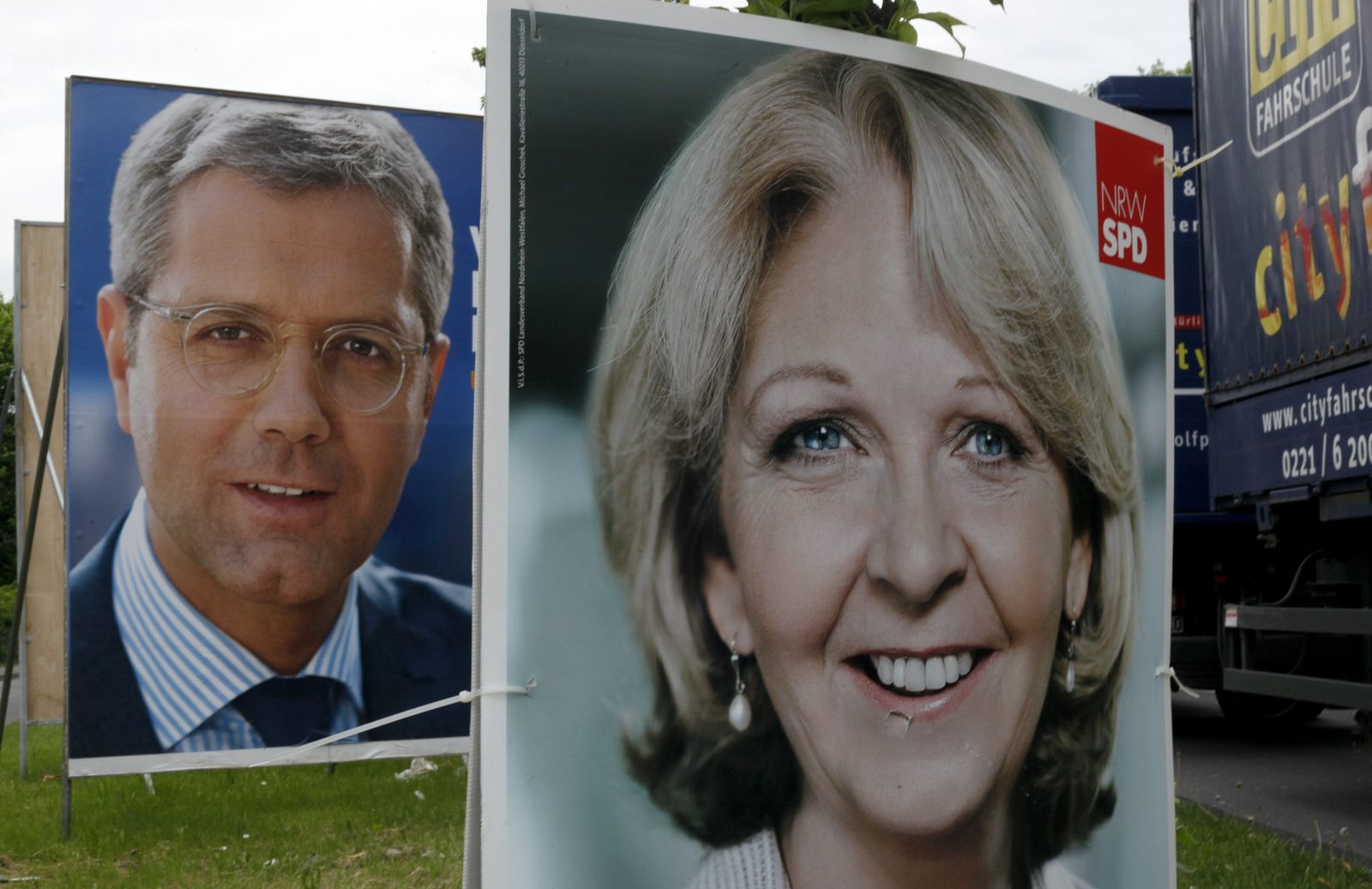 Norbert Röttgen, the CDU candidate for governor in North Rhine-Westphalia, faces an uphill battle against opponent Hannelore Kraft of the SPD.