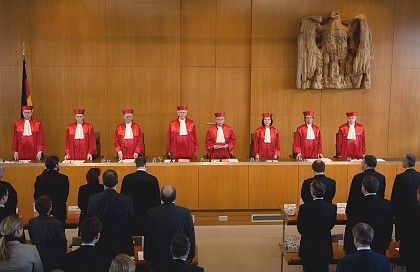 The Constitutional Court in Karlsruhe delivered their verdict Wednesday.

A controversial state law allowing the government to spy on a citizen's hard drive using virus-like software has been struck down by Germany's highest court. But the verdict leaves some wiggle room for politicians who want a version of the law for all of Germany, saying that, in principle, it did not violate the federal constitution.

The German Constitutional Court, in the southwestern city of Karlsruhe, said on Wednesday that a surveillance law passed in 2007 in the state of North Rhine-Westphalia was too broad. The law gave security officials the authority to spy remotely on suspected criminals by sending a computer virus that would read data from a suspect's hard drive. The law permitted not just access to the hard disk but also ongoing surveillance of data, such as e-mail, as well as remote tracking of keyboard entries or online phone calls.

This activity, the court said, violated a person's right to privacy. But the decision allowed for exceptions: in cases of "paramount importance" -- that is, in cases of life or death, or a threat to the state -- authorities would be permitted to use such software, with a court's permission.

Lawmakers in Berlin on both the left and right have waited for direction from Karlsruhe to forge a federal law on cyber espionage. German Interior Minister Wolfgang Schäuble says the practice of online surveillance is important for the war on terrorism. However opposition politicians and German Justice Minister Brigitte Zypries have strongly criticized the practice.

The new ruling could pave the way for Germany's grand coalition government -- made up of the center-left Social Democrats and the conservative Christian Democrats -- to bring in a federal-level law on online snooping. "If the Social Democrats cooperate, it should be possible to pass new anti-terror powers for the Federal Office of Criminal Investigation, including online surveillance, by the (2008) summer break," Wolfgang Bosbach, a Christian Democrat member of parliament, told the Neue Osnabrücker Zeitung newspaper ahead of Wednesday's ruling.