Adventure travel is tough enough. But it gets a lot harder when it requires reaching your destination without the aid of a decent map. And evading the East German secret police and the KGB along the way.

Still, before the fall of the Berlin Wall, that was exactly what some restless young East Germans were doing. Even as heroic escapes were being made from East Germany to the West, some preferred to buck the travel restrictions of their republic by going in the opposite direction. And while many East Germans were escaping to the West, these travelers had a different goal: "stealth travel" within the vast and challenging Soviet Union.

André Nickl was one such thrill-seeker. He had no intentions of leaving East Germany permanently when he stole into the Soviet Union in 1982. He had carved out a comfortable niche for himself in East Berlin and landed a coveted university spot to study architecture. 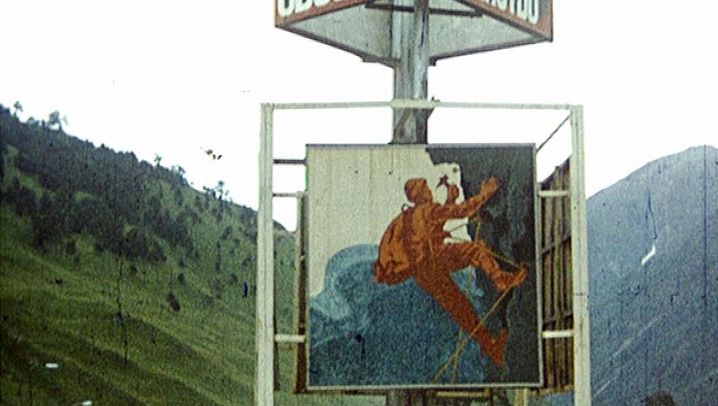 Still, Nickl had an itch for adventure and he was fixed on scaling Mount Elbrus, an extinct volcano and the highest peak in the Caucasus mountains. So, when he was 22, Nickl crossed into the USSR without knowing how far he would get and what might happen as he voyaged through a country dotted with security checkpoints and brimming with Soviets suspicious that every foreigner was a potential spy.

"I had no idea what consequences awaited me if I got caught," recalled Nickl, a soft-spoken man who still lives on the eastern outskirts of the German capital. He added that the consequences would have made little difference: "Our longing for travel was overwhelming."

Most people know that, until 1989, East Germans were barred from traveling into the West. What many overlook is that they could barely travel at all. Voyaging in the USSR was forbidden, except with official tourist packages where every minute was planned. The only countries where independent travel was permitted for citizens of the German Democratic Republic (GDR) were Romania, Bulgaria, Hungary, Poland and former Czechoslovakia.

These limitations agitated those East German youth who were set upon scaling famous mountains and hurtling down the whitewater rivers of their Socialist neighbor.

"I think that for many of us, the main motivation for undertaking such a trip was to overcome our confinement," said Nickl, remembering how plans for his USSR trip were hatched. "Isn't it always most exciting to go to those places that seem inaccessible?"

Crossing the Soviet Border Was An Adventure In Itself

In fact, the young adventurers faced a double challenge. Not only did they have to conquer some of nature's most treacherous peaks and valleys, they needed to do so unnoticed. To make things even more difficult their trips were usually planned using vague maps from East German libraries scaled at 1:6,000,000 and known to be incomplete -- and possibly even false -- as Cold War maps were often deliberately misleading.

The first step was crossing the heavily guarded Soviet border. In order to do this, Nickl and his travel companion, like most of the stealth adventurers, took advantage of a bureaucratic loophole left over after the Prague Spring -- the period of brief official tolerance in Czechoslovakia in 1968, ultimately crushed by Soviet troops. As a result of Czechoslovakia's liberalization, East Germans had been banned from traveling there -- but this meant that they were also cut off geographically from Romania, Hungary and Bulgaria. So the GDR issued a two-day transit visa for the Soviet Union intended to let its own citizens circumvent Czechoslovakia so they could reach the southern Soviet bloc countries. But while the ban was eventually lifted, the transit visa remained. With a bit of guile and luck, one could convince a GDR bureaucrat to give you this ticket onto Russian soil. The only problem was that the visa expired after just 48 hours.

Once off the train and in the USSR, Nickl and his friend needed money -- a month's worth of cash might have raised the border guard's suspicions. Anticipating this obstacle, they had packed a few extra T-shirts and pairs of the notoriously ill-fitting and unstylish Levis knock-offs produced in the GDR, which were better appreciated in the economically worse-off Soviet Union than at home. By selling their stylish stash, the two adventurers pocketed enough cash to fund their travels, as well as buy a few weeks worth of bread, milk and canned sardines.

The next and more serious challenge was learning to interact with Soviets. "At first, we had a hard time because we had no idea how things worked or what to expect," recalled Nickl. "Given identical situations, one person would offer hospitality while the next would have us arrested."

Not everyone got away easily. Hartmut Beil snuck into the Soviet Union, his heart set on scaling the 7,134-meter Lenin Peak, on the border of Tajikistan and Kyrgyzstan, after reading a book about mountain climbing. He was arrested twice within a week.

Drunk Russian Border Guards Fed Him, Then Threw Him Out

Alone and equipped only with a Russian "map" -- a large white piece of paper with a few towns and roads penciled in -- Beil stumbled toward Sevastopol, a Crimean 'closed city' restricted because of a naval base there. It did not take long before a man offered him a pail of milk and called in the Kalashnikov-toting police.

"I had no way of knowing whether they would send me to Siberia or let me go on my way," said Beil, who spoke only the cursory Russian he had learned in school. Neither happened. Thanks to the help of a sly translator, the authorities decided Beil had simply gotten lost during his trip through the USSR. He was put up in a hotel, then personally escorted by the official passport officer on a hitchhiking trip to the airport, then forced to use the last of his money to fly back to Odessa.

Exasperated and broke, Beil wanted out: "I'd had enough of being noticed everywhere and constantly questioned. I wanted to go home," he said, noting the irony of wanting to return to a country famous for the surveillance of its citizens, to avoid being watched.

No such luck. Just five kilometers from the Romanian border Beil was arrested once more and, after breaking down and ranting about how sick and tired he was of the USSR, the officers forced him to eat and drink with them for six hours before depositing him, drunk, with Romanian border guards.

Rafting Down Russian Rivers On A Home-Made Vessel

Which is why Beil never reached his destination. But other East Germans -- like Nickl -- did. Eventually, during their illicit voyage, Nickl and his companion met up with a group of Russian climbers. They scaled Mount Elbrus, piling on all the clothes they had brought in order to combat the cold. After descending, the two illegal travelers were interviewed on Russian radio and cheekily passed themselves off as an official GDR climbing team.

Another group cobbled together a homemade catamaran raft and floated down a river in the Soviet Union for four weeks. Others traveled as far as Kamchatka and even Afghanistan. Those who got farthest had often brought along imaginatively forged travel documents stamped by German organizations that did not even exist. These "official" papers sanctioning travel within the USSR helped convince many an authority-minded Soviet policeman to let the young East Germans go on their way.

Super-8 film footage of some of these wild journeys compose a good part of the 2006 documentary film "Unerkannt Durch Freundesland" (roughly, "Incognito Through the Socialist Brotherland"). Cornelia Klauss, the film's director, has also contributed to the foreword of a book about these voyages, which bears the same title as the film, by Jörg Kuhbandner due out in the spring.

East German Authorities 'Were Just Happy That We Came Back'

"I think it is important to show that East Germans were not only kept from traveling to the West, but also from going east," said Klauss. "I was interested in this topic because it shows how people in the GDR came up with survival strategies in order to deal with the system under which they lived."

Indeed, Nickl and Beil and most of the other incognito travelers who went east never intended to go any further west, or escape the German republic. "My family was here. People who found a good niche didn't have such bad lives," said Nickl.

Interestingly, East Germany's secret police, the Stasi, never seem to have noticed these temporary escapees. In researching his forthcoming book, Kuhbandner found no categorical mention of the stealth travelers.

And although most of the stealth travelers undertook their adventures fearing the consequences -- tougher restrictions, loss of their university privileges or worse -- Nickl noted that those he knew had never had any of those problems upon their return. He assumes that this uncharacteristic leniency was because the GDR government officials were simply relieved that their youth had not attempted to escape into the West. "I think they were just happy that we came back," Nickl concludes happily.