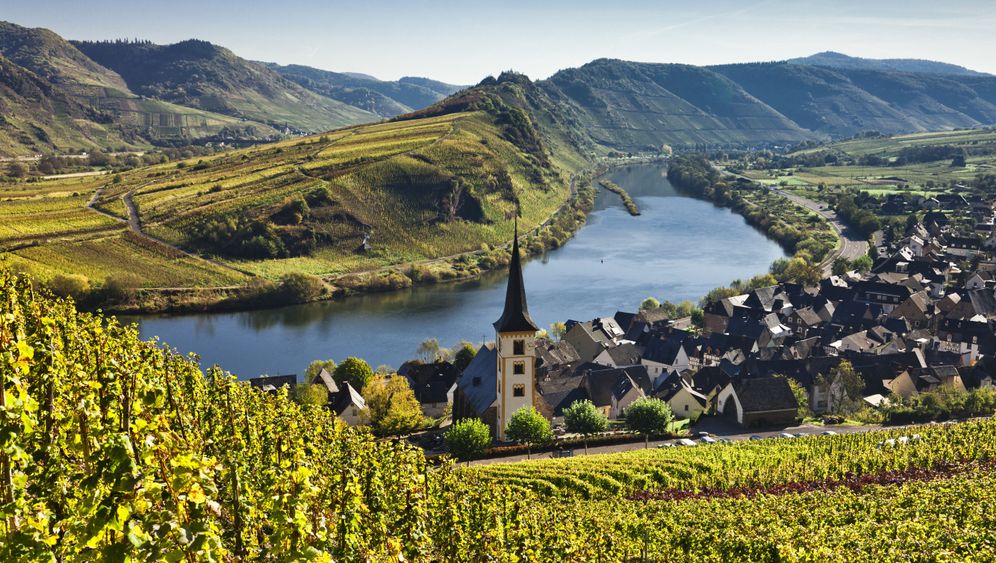 The prototype looks like a cross between a NASA moon rover and Fred Flintstone's foot-powered car. It has four to six aluminum rollers covered in blue pointed knobs, a GPS locator and a remote-controlled steering system. This is the vehicle designed to climb up, down and around Germany's steepest vineyards, without the help of a driver.

There are two designs of "Geisi," as researchers have dubbed their curious contraption, both sitting in a workshop at Geisenheim University, in the Rheingau wine-producing region of central-western Germany. Technicians at the university, which specializes in vineyard technology, spent the entire summer testing the device on the banks of the Upper Middle Rhine Valley. They sent it on test runs with two to three axes and up to 80 percent inclines. And now, at the end of the season, they're convinced that Geisi could help save one of Germany's most beautiful cultural landscapes: the vineyards along steep sides of the valleys along the Rhine, Main, Mosel, Saale, Saar and Neckar rivers.

These vineyards, built on extremely steep slopes, have been in trouble for years. Cultivating and harvesting grapes on hillsides is elaborate, expensive and dangerous. Machines and tractors that cut, spray and harvest the rows of vines on flat land are of hardly any use in such hills.

More and more winemakers in the region are thus pulling out of the labor-intensive business and moving their vines to flatter land. "In 1970, we still had 12,000 hectares (30,000 acres) of real steep-sloped vineyards in Germany," says Hans-Peter Schwarz, 53, head of the Institute for Technology at Geisenheim University. "Today, it's not even 8,000." Schwarz considers "real steep-sloped vineyards" to have at least 60 percent incline -- or to be, as he describes them, "those kinds of locations that have shaped the image of viticulture in many regions of Germany for centuries."

Subsidies a 'Drop in the Barrel'

Vineyard managers have long been watching with concern as their vines, which are planted closely together in carefully measured rows, have been invaded by wild growth of bushes and thorns. The Economy Ministry of Rhineland-Palatinate warned years ago that many regions look to the vineyards along the rivers for not just their identity, but also for jobs, such as in the tourism industry. The Upper Middle Rhine Valley was named a UNESCO World Heritage Site in 2002 in large part for its "steep valley sides (that) have been terraced for vineyards." It was those vineyards that made the region "the embodiment of the romantic Rhine landscape."

German state governments have developed grant programs and financial incentives to protect the vineyards. In Hesse, vintners can receive annual subsidies of up to €2,300 ($3,100) per hectare of steeply-planted vineyards if they adopt eco-friendly cultivation techniques.

The sum, however, is a little more than a drop in the proverbial wine barrel, warns Schwarz, the professor at Geisenheim University. Cultivating steeply inclined vineyards requires time-intensive manual labor, often with cables akin to those used for rock climbing. All together, one hectare in one season can cost around 1,500 hours of labor. On flat land, where vintners can use tractors and automated harvesting vehicles, they can cultivate the land for about 180 hours of labor. "You can hardly compensate for this difference by charging more for top-quality wines from sun-kissed hillside vineyards," says Schwarz.

Even more pressure on owners of sloped vineyards is coming from Brussels. The European Union wants to liberalize the wine market and gradually phase out a regulations that has thus far created comfortable breathing room for grape growers. Specifically targeted is Germany's legally mandated freeze on developing new vineyards. The law caps the land space allowed for viticulture at just over 100,000 hectares. Anyone who wants to enter the grape-growing business must either take an already cultivated vineyard or prove that a similarly sized vineyard in the same region has been shut down.

The researchers at Geisenheim University believe their vineyard-climbing vehicle Geisi could streamline the operations of sloped vineyards, encouraging their owners to continue cultivating their difficult land. Schwarz and his team have been tinkering with the machine for about a decade. In contrast to other crawler-type vehicles, Geisi has a low center of gravity that prevents it from tipping over even in the steepest of terrains. That's also due in part to the fact that the motors are built inside the rollers underneath the wheels' axes.

In addition, a sophisticated satellite navigation system is meant to ensure that Geisi's on-board computer can find its way through the rows of vines all by itself. That would enable it to target specific vines for things like spraying or basic pruning.

At 1.7 meters (5.6 feet), the prototype is still far too wide to be put to use between the old and often closely planted rows of vines. That's why the university is planning to build a svelter model with a specialized firm in southern Germany. "The market for it is there," Schwarz says confidently. At an industry trade fair in Stuttgart in April, he says he "could have sold 10 models" of Geisi.

The researchers at the university are meanwhile working meticulously on other cultivation methods that would minimize the need for human labor on steeply sloped vineyards. For example, they've tried out a minimal pruning technique developed in Australia, by which vines are planted at greater-than-average distances from each other. The rough pruning done by machines allows the vines to grow virtually unkempt.

Initial results from using the technique have been encouraging. In the fall, the grapes were somewhat smaller than those grown with conventional methods. But there was also less rot on the vines, says university President Hans Reiner Schultz. "The grapes weren't packed together so tightly. Instead, they were looser, so that after it rained they could dry off more easily."

However, the procedure isn't totally polished yet. "Look here," says Schultz, pointing to a computer screen with photos of a rotting vine that's hardly recognizable behind a thick, bloated layer of leaves. "Aesthetically speaking, that's nothing," he says.

Schultz says he still has reason to believe that the minimal pruning technique could measurably improve the results of steep hillside vineyards. For about four years, the grapes the university cultivates on a a test slope in the town of Kaub have been turned into wine. In 2012, the university's own winery bottled the vintage and labeled it "Kauber Rauscheley." It's a fizzy, dry riesling that's being offered to owners of steeply sloped vineyards for tasting. Shultz says he's optimistic. "A vintner is best convinced of a new method when he can taste the results."