There was a moment towards the middle of Sunday evening's debate when Chancellor Angela Merkel's cumulative speaking time was several minutes longer than that of her challenger, Peer Steinbrück. The result was a few questions in a row for Steinbrück -- and he used the opportunity to go on the attack. He threw one roundhouse after another, not unlike a boxer pinning his opponent against the ropes.

Except, as became clear throughout the debate, Merkel is almost impossible to strike cleanly. The harder a well-prepared Steinbrück swung on Sunday night, the wider was the margin by which he missed.

The 90-minute debate on Sunday evening was the only time the two candidates are to meet for a face-to-face chat ahead of the general election on Sept. 22. Merkel has done her best throughout the campaign to ignore her challenger as best she can, and limiting the number of debates to one was also her way of sending the central message: My challenger is hardly worth talking about.

Steinbrück was clearly eager to change that narrative on Sunday. He was quick to list the numerous things that Merkel had not managed to accomplish in her last eight years in the Chancellery: Improvements to old-age care, establishment of a comprehensive minimum wage, a clear plan to control energy prices and sufficient attention to economic stimulus in Southern Europe.

On almost every single one of those issues, Steinbrück was able to clearly, if a bit wonkily, pinpoint Merkel's shortcomings and gain the rhetorical upper hand. At least temporarily. Repeatedly, however, Merkel was able to wriggle out of the trap that Steinbrück had set, returning to her talking points and placidly listing her government's accomplishments. It is, she said at one point, "relatively sensational" what her center-right coalition has accomplished in the last four years. She followed up with such trenchant observations as "our work is not over yet," "we have demonstrated that we are capable" and "Germany is a motor for growth" and an "anchor of stability."

And that is the central problem facing Steinbrück as the campaign enters its final weeks. Even as Merkel's wait-and-see leadership style is often infuriating, the economic numbers make Steinbrück's uphill battle even steeper. The job market is strong, growth is returning to both Germany and the euro zone and, for all the current discussion about a third aid package for Greece, the euro crisis has faded temporarily into the background.

The result was a strikingly confident, almost smug, Merkel calmly responding to the attacks from Steinbrück, only occasionally raising her voice so as to be allowed to finish some oft-repeated campaign platitude before being interrupted by one of the debate's four moderators. She was more like a grandmother at a fireside chat -- albeit one wearing a necklace in the colors of Germany's flag -- than a politician battling for re-election. Whereas Steinbrück repeatedly broke out his unbecoming open-mouthed sneer coupled with a clipped, biting tone, Merkel would only give him a condescending smile. If the SPD candidate was trying to demonstrate why he lags so far behind the chancellor in personal popularity ratings, he was successful.

Even in the discussion over the possible third aid package for Greece, an issue on which Steinbrück has been consistently blasting the chancellor for not being honest with the German electorate, the SPD candidate was unable to score many points. To be sure, he repeated his charge that Merkel's crisis policies were doing more to harm Southern Europe than help it -- and accused her of not coming clean about how much saving Greece will ultimately cost. But when he himself was asked what the price tag might ultimately be, he -- perhaps unwisely -- answered honestly, professing that it was impossible to know.

There was, however, one moment in the debate when Merkel was completely out of sorts. Towards the end of what was largely a tedious hour-and-a-half, one of the moderators drilled Merkel about the vast data surveillance undertaken in Germany and around the world by the US intelligence agency NSA. If, Merkel was asked, a German sent an email from one German city to another German city, but it was routed across a server in the US and landed in the American surveillance net there, was that a violation of German law?

Merkel is not one who fidgets often. But she fidgeted while formulating the only answer possible. No, that would not represent a violation of German law, she said, attempting to wrap the answer in sufficient rhetoric about the intricacies of data privacy and Internet law. Steinbrück, in response, accused Merkel's government of not doing enough to defend Germans' constitutional rights and called Edward Snowden, the man responsible for the revelations of NSA surveillance, "courageous."

That, though, was just one moment. And, unfortunately for Steinbrück, it was a moderator who had struck the decisive blow, rather than he himself.

Still, as the SPD candidate repeatedly said toward the end of the evening, a few weeks remain in the campaign and his passable performance in the debate could ultimately help him close the wide gap separating him and Merkel. Most surveys taken immediately after the show ended indicated that viewers felt that Steinbrück had won. One flash poll taken after the debate Sunday night also showed that he had massively reduced the "likeability" gap between himself and Merkel by 17 percentage points and now trails her by just 3 points at 45 percent.

Such ephemera, however, is often just that. And pinning down Merkel will only become more difficult as the campaign reaches its end. The chancellor, after all, can now go back to largely ignoring her challenger, a strategy which has proven wildly successful thus far. 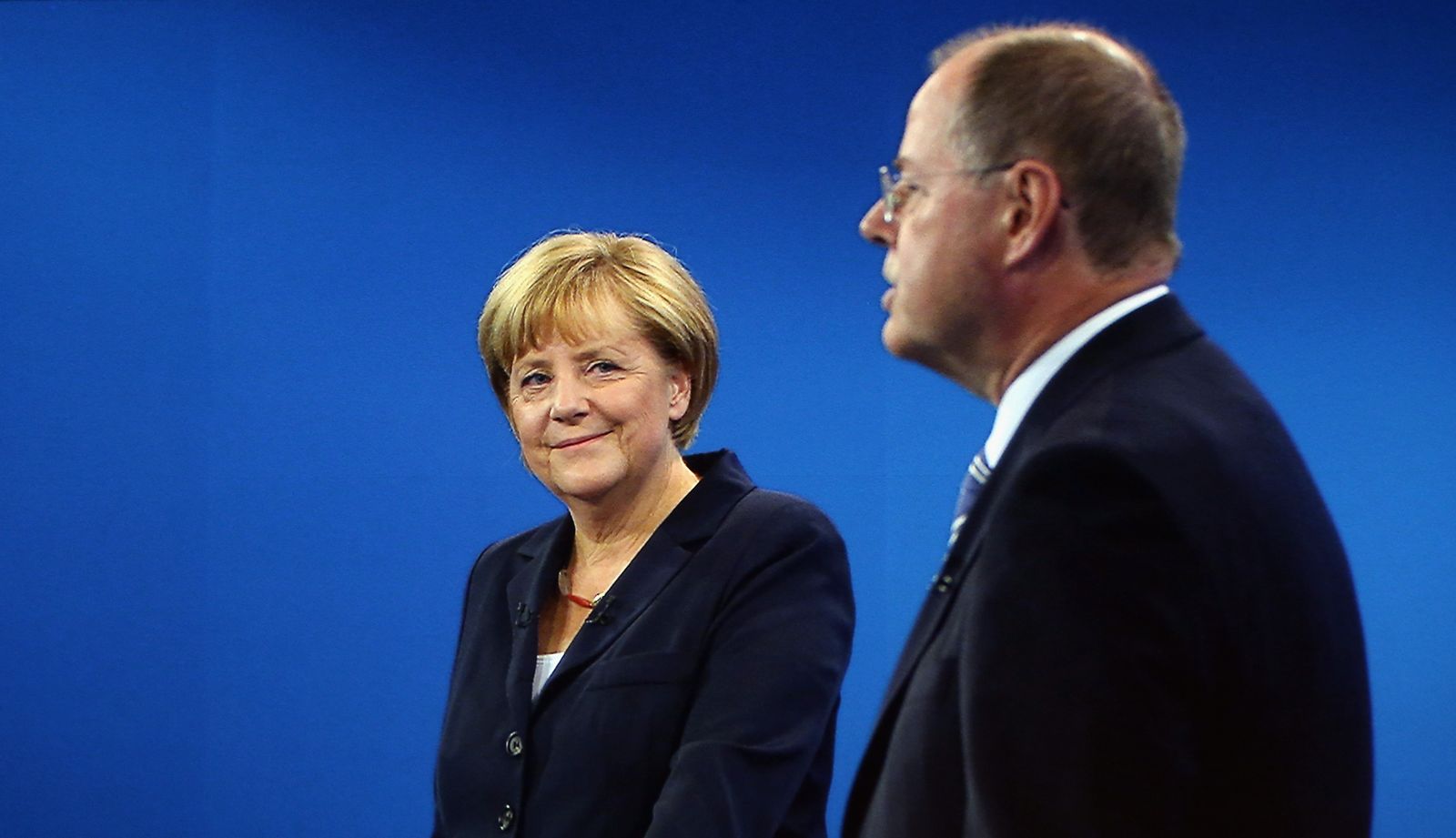 Merkel tried to seem as though she had little to fear on Sunday evening.