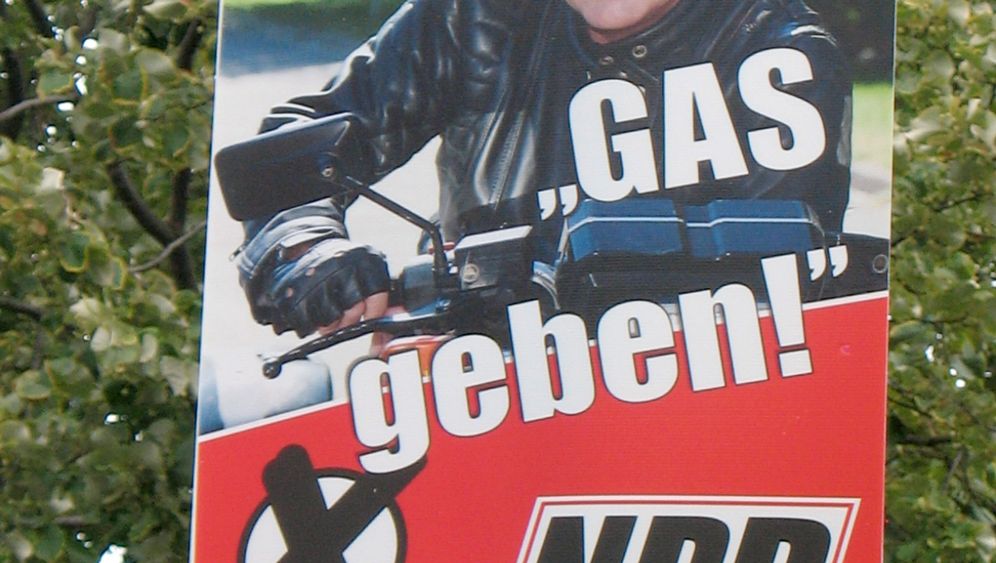 In campaign posters sprinkled around Berlin, Udo Voigt, the leader of the right-wing extremist National Democratic Party of Germany (NPD) leans toward the camera with a relaxed smile. Sitting on a motorcycle, decked out in a black leather jacket and fingerless gloves, his hand grips the throttle. "GAS geben!", the poster reads.

The phrase, which translates directly as "step on the gas," refers to revving an engine, and is typically used to encourage someone to speed up. But in the context of a party that has been closely associated with the neo-Nazi movement, it has a much different connotation.

Andreas Gram, head of the Berlin city government's legal committee and a member of the conservative Christian Democratic Union party, said he was speechless that "right-wing extremists" would openly toy with an "association with gas chambers," adding that the poster was "misanthropic."

The slogan is an "intentional provocation," Volker Ratzmann, the Green Party's leader in the city-state's parliament stated. Meanwhile, the integration policy spokeswoman for the Left Party, Elke Breitenbach, said she would ensure the poster underwent legal review.

Some 22,000 copies of the controversial campaign posters were distributed around the capital city to encourage voters to cast ballots for Voigt, the NPD's top candidate and member of the district council in Berlin's Treptow-Köpenick district. The politician denies the allegations, claiming they are baseless. "I am a passionate motorcyclist and want to power my way into the (parliament) with gas," he told SPIEGEL ONLINE. "After 66 years, people need to stop bringing up things from the past."

Before printing the posters Voigt said he showed it to 43 different people, among them non-NPD members, and only one made a negative association. The party leader is known for his xenophobic views. "The boat is full," he says in a recent campaign video. "We don't want further immigration." He also calls for an "immediate repatriation of foreigners" living in Germany.

Though there has recently been renewed debate over whether the party should be banned under laws aimed at preventing Nazis from ever coming to power again in Germany, the NPD seems undaunted by accusations of tastelessness. They've even resurrected a controversial campaign concept from their past. In 2008 they caused a stir with a caricature of Middle Eastern immigrants on a flying carpet paired with the phrase, "Have a nice flight home." The party has adopted the same motif this year, as well.

From time to time, Voigt runs into problems with the law with those kinds of slogans. In April 2009, he was convicted on charges of racial incitement, but the ruling has since been overturned in appeal proceedings. The charges stemmed from an incident during the football World Cup in 2006, which was hosted by Germany, whereby the NPD boss insulted German national team player Patrick Owomoyela with a racist flyer and claimed the team had been "overrun by foreigners."

In light of the current debate over a possible ban on the NPD, Berlin Mayor Klaus Wowereit is faced with a fundamental question. "It is and remains intolerable that the NPD, for as long as it hasn't been banned, must still have its election campaign costs reimbursed with the support of taxpayer money," he said.

This isn't the first time during the current Berlin state parliament and mayoral election that the NPD has created a scandal. In the original version of a recent party information pamphlet, a crossword puzzle asked people to find a five-letter German name that has "fallen somewhat out of fashion." The answer: "Adolf".

Another part of the puzzle focuses on a "German politician (a Friedensflieger, or freedom flyer) of the 20th century." The four-letter answer: "Hess". Hitler's deputy, Rudolf Hess, flew on his own initiative to Scotland in 1941, allegedly to negotiate an end to the war with the British government.

The puzzle even went too far for some members of the party. Jörg Krebs, chairman of the state party chapter in Hesse, called the crossword the "stupidest PR campaign ever undertaken by the NPD."

So far, the NPD has never managed to clear the five percent hurdle needed to hold a seat in the Berlin state government. However, the party does have members in some of the city's district councils, where the barrier for entry is only 3 percent. This year, the party is fielding candidates in 11 of Berlin's 12 districts.