How do you carve up a cow? First you cut the meat off the bones. You start by severing the muscles from the joints with a sharp knife. The fibrous meat can then easily be scraped off, from top to bottom. After you've removed the flesh there's still a lot of goodness left. Deep in the long bones and vertebrae lies the marrow. To get at this delicacy you smash the bones and scrape out the marrow or simply boil it out in water. What's left is a pile of naked bones with traces of scratching and scraping as well as the small debris of bone that contained marrow. 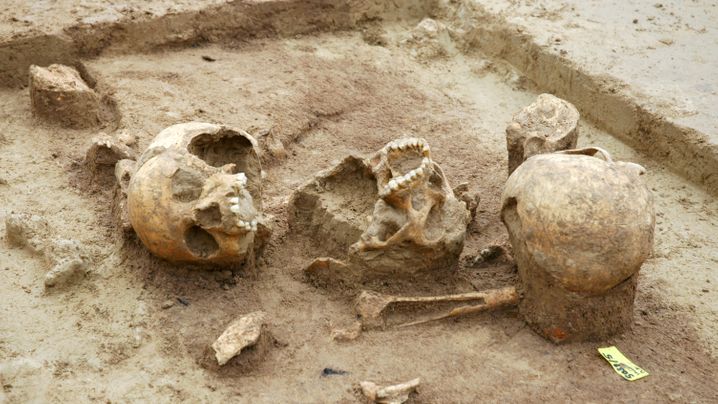 Archaeologists found just such a pile -- a huge one -- when they were excavating a Stone Age settlement in the small town of Herxheim in south-western Germany. The only difference is that the bones aren't from cattle. Researchers found the carefully scraped remains of some 500 humans, and they haven't even excavated half the site. "We expect the number of dead to be twice as high," said Andrea Zeeb-Lanz, project leader of the Cultural Heritage Agency of the state of Rhineland-Palatinate.

That's a lot of corpses for a tiny Stone Age village. There were 10 buildings at most here in the last phase of the Linear Pottery culture of the European Neolithic Age around 5,000 to 4,950 years BC. The corpses weren't native to this area, researchers have discovered. They came from all over Europe -- from the area of what is now Paris, from the Moselle River 100 kilometers to the northwest and even from the Elbe River valley some 400 kilometers away. The broken bits of pottery lying between their ribs reveal their origin. It's the so-called Linear Pottery that gave the entire population group its name: decorated with linear patterns pressed into the moist clay while it was being made.

The strangers brought only the finest pottery from their home regions -- in many cases even more beautiful than the pottery they placed inside the graves of their own dead at home. But the pottery was smashed to pieces and scattered over the bones, along with brand new millstones and stone blades. Everything was hacked to pieces, broken up, mixed together and poured into pits.

The anthropolgist Bruno Boulestin conducted a close examination of the bone fragments. He published his findings from one pit eight meters long in the latest edition of Antiquity magazine. The pit contained a total of 1,906 bone fragments from at least 10 people. Two of them were infants or still-born children, one was a fetus in the 34th to 36th week of pregnancy, there were two children aged six and 15 and six adults, at least one of whom was male.

All of them -- babies, children, adults -- were butchered by expert hands while the bones were still fresh, as the breaks and cuts show. Boulestin concluded that the human bones bore the same marks as those of slaughtered livestock, and that the dead of Herxheim were prepared as meals. He believes that marks on the bones indicate that body parts were cooked on skewers. His conclusions contradict other researchers who believe the meat was taken off the bones as part of a burial ritual, and wasn't eaten.

No Signs of Battle Wounds

Who were the dead? Conquered enemies perhaps? Probably not, because the bones showed no signs of battle wounds. None of the skulls found was smashed, and there were no arrow heads between the ribs. The dead of Herxheim appear to have been in good health when they died. Their joints weren't worn down, their teech were in exceptionally good condition and there was no sign of malnutrition.

The theory of conquered enemies also seems unlikely given that the small group of Herxheim villagers is unlikely to have vanquished people hundreds of kilometers away and dragged 1,000 of them back to their little hamlet in the space of just 50 years. "One could also imagine that people volunteered to come here and be ritually sacrificed," Zeeb-Lanz told SPIEGEL ONLINE.

So what happed in Herxheim at the start of the fifth millennium BC? It's clear that the hamlet quickly came to fame. It had been a sleepy, uneventful place since the so-called Flomborn Phase around 5,300 years BC. But around the turn of the millennium something happened that caused people from all over Europe to make pilgrimages to this place -- a sensational feat of logistics and communication for that age.

Only 50 Years of Fame

But it didn't last long. By 4,950 BC everything was over. After that there were no more deaths in Herxheim because the settlement ceased to exist. It's a puzzling phenomenon for archaeologists because 50 years is an extremely short time for a place of such significance. "And 50 year is the maximum," says Zeeb-Lanz. "It could all have happened in just two years or even five weeks."

It's clear that it wasn't hunger that drove the inhabitants of this mysterious hamlet to carve up humans. What they did with their victims was part of a ritual, a religious ceremony. This includes the mysterious treatment of human skulls. First the skin was peeled off them. All it took was a cut across the length of the head and the skin could be peeled off the sides. Then a blow to the face at the front and the base of the neck at the back, and two blows each at the sides -- the result looks like a drinking vessel.

"But probably nobody drank from them. The edges are still so sharp today that one would cut one's lips on them," says Zeeb-Lanz. Archeologists found these prepared skulls piled together in one place. "The more research conduct, the more mysterious this place becomes."

But did the Herxheimers really devour the dead? It's impossible to prove that archaeologically. Boulestin is sure they did, but not all members of the excavation team agree with him. Project leader Zeeb-Lanz is careful too: "We mustn't forget that this was no giant settlement. Who is supposed to have eaten all this?"