Artists in Berlin's Kunsthouse Tacheles have been ordered to leave the famous, bomb-damaged building, which has for 19 years been an iconic symbol of the city's rebellious, post-reunification counter-culture. 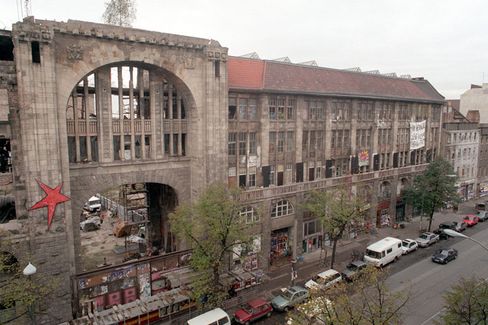 Tacheles has been a visitor magnet in Berlin for years.

The building's management was served an eviction notice effective 1 p.m. on Monday. However Martin Reiter, director of the non-profit group which manages the building with its 31 ateliers, cinema, theater, bar and restaurant, said artists would ignore the notice.

Tacheles, which started its life as an illegal squat shortly after the 1989 fall of the Berlin Wall, entered into an official lease with the building owner 10 years ago. That lease expired on Dec. 31, 2008. The eviction notice was long anticipated, though until yesterday Tacheles artists were unsure if the owners would attempt to force them out.

The owners of the site, an investment fund called Fundus Group, have previously declared their intention to construct luxury apartments at the location, in Berlin's centrally-located Mitte district, formerly part of East Berlin. A five-star hotel and restaurants are to round out the development.

Despite the eviction notice, it seems doubtful that the site will be given up without a fight. It is a major draw for tourists, with some 300,000 visiting Tacheles each year, and it is an important symbol of resistance against creeping gentrification in Berlin. Some 30,000 signatures have been collected in support of keeping the site as it is. Some city leaders have announced their intention to campaign for the artists.

Tacheles, which means "straight talk" in Yiddish, began life as a department store in 1906. Later, it played host to Nazi administrators and was bombed during World War II. Much of the building was destroyed, but East German officials never demolished or fixed up the parts that remained standing, resulting in the structure's decrepit appearance. It was occupied in 1990 by artists wishing to save it from demolition and it has since developed into a flourishing culture center, with up to 100 artists working in residence during peak months.

Fundus Group later purchased the building and negotiated a 10 year lease for the artists in 1998 with a symbolic rent of just one deutsche mark, or 50 euro cents, per year. The fund announced its plans to develop the site in 2003. Reiter said Tacheles would petition government authorities to intervene, claiming that Fundus Group does not have the financial resources to carry out its plans.

"This house would not be here if not for the artists. We have stated our desire to buy the property, and have already invested €300,000 in renovating it. We have the right to stay, and we will go to court for months or years to remain here," Reiter said.

Reiter said he was planning to release a "black book" of information about the Fundus Group, which he says will show it is bankrupt and unable to proceed with the planned development. "This is not the time for a luxury development," Reiter said. "There is no prospect to build up expensive real estate in this area. Perhaps the financial crisis will help us. If the housing market was strong, we would have been out of here years ago."

Tacheles is the most famous of Berlin's former squat houses. Squatting reached its height in West Germany in the 1970s and 80s. In Berlin, though, the movement took off after the Berlin Wall fell, resulting in a large number of people flooding out of former East Berlin to look for work, leaving a number of buildings empty. Ownership disputes were also common, making it easier for squatters to move in.

Nearly two decades later, only a handful of squats remain, most of them operating as activist meeting houses. Some squatters have become legitimate rent-paying tenants, others continue to battle with their owners.