The political fallout from Friday's attempted terror attack on Northwest Airlines Flight 253 from Amsterdam to Detroit continued on Wednesday. While American President Barack Obama criticized national security services for not spotting would-be terrorist Umar Farouk Abdulmutallab earlier, the debate in Europe has focused on airport security. After expressing initial opposition to controversial new security measures like what Germans are calling the "nacktscanner" or "naked scanner," some German politicians are now saying that full-body scanners may soon be installed in German airports as well.

The full-body scanner uses high frequency radio waves to produce an image of the human body. This means that anything hidden under clothes -- ceramic weapons or explosives for example -- is revealed. It also enables security officials with an alternative to pat-down body searches. 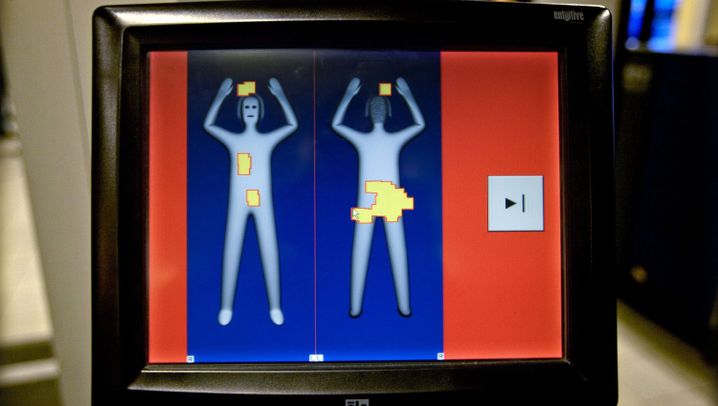 Still, the fact that the machines "see" underneath a passenger's clothes has led to concerns about intrusion on privacy and infringement of civil rights in both Europe and the United States. There have also been a slew of alarming descriptions of the security systems, like "striptease surveillance" and "digital strip search."

Terrorist Could Have Been Caught with Full-Body Scanner

It is highly likely that, had Abdulmutallab passed through such a scanner, the explosives he had moulded to his inner thigh would have been detected. And in fact, such scanners are already in use at Amsterdam's Schiphol Airport, where Abdulmutallab boarded the flight to Detroit. But as NRC Handelsblad reports Abdulmutallab never passed through Amsterdam customs because, as a transit passenger with a connecting flight, he technically never entered the Netherlands. He was simply subjected to another standard security check before boarding the flight to Detroit.

On Wednesday, the Dutch government announced at a press conference that within the next three weeks it would begin screening all US-bound passengers using full-body scanners. Debates over full-body scanners have simmered in the European Union for several years now. Although a pilot program is being tested by the Dutch government at Schiphol, the EU has been reluctant to permit mandatory use of the technology because it has the potential of taking nude images of passengers. Earlier this week, Schiphol spokesperson Mirjam Snoerwang told NRC Handelsblad, "European regulations tell us we can only put people through them (the full body scanners) on a voluntary basis. And objections have been raised with regards to privacy." Several airports in the United Kingdom also have full body scanners.

Germany doesn't have any and, as late as Monday, German politicians were still saying that they didn't think full-body scanners were necessary. Now, though, in an interview with the daily Süddeutsche Zeitung published on Wednesday, Interior Minister Thomas de Maizière, a conservative Christian Democrat and member of Chancellor Angela Merkel's cabinet, indicated he is more open to the full-body scanners than previously. The Interior Ministry is responsible for border security and for protecting the country against terrorism. De Maizière's predecessor, Wolfgang Schäuble of the CDU, had said that "we will have nothing to do with this nonsense." But asked whether the government was planning an about-turn on previous policies, de Maizière told the newspaper that the full-body scanners were actually being tested even back when Schäuble was quoted on the subject. "The so-called 'nonsense' had to do -- and still does -- with the technical options available at the time and with the resulting pictures which did not take into account personal rights," de Maizière said.

And although in the interview, he appeared to be more open to seeing the scanners installed in German airports, de Maizière was also quick to point out that before they could be, three criteria needed to be fulfilled. "Firstly, any such equipment must be efficient, it must identify the things that one needs to identify," he said. "Secondly, the equipment must be completely harmless in terms of human health. And thirdly, it must comprehensively take into account an individual's rights." At the moment, de Maizière noted, "we are really only arguing about the third criteria. That discussion is appropriate -- but all of the three criteria must be fulfilled. Only then can we make a decision about the installation of such devices."

The full-body scanner is currently being tested by Germany's federal police, who also have responsibility for airport security. The results of these tests are expected in mid-2010, after which full-body scanners may be installed in some German airports.

Potential health problems include the exposure of frequent travelers to radio frequencies. But as L-3 communications, a company that makes a full-body scanner, told Scientific American magazine, the energy projected by the radio wave scanners is "one ten-thousandth the energy in a cell phone transmission."

In an interview with German radio station HR-Info, Professor Rolf Michel, the head of the Commission on Radiological Protection which is part of Germany's Environment Ministry, warned against any airport scanners that use X-rays on humans. Long-term exposure could cause cancer, he said. And he also remained concerned about the full-body scanner, which uses radio waves rather than X-rays. "Up until now we have had little information as to whether these could be dangerous. The problem for us is that there is simply not enough information on the subject. At the moment there is intensive research underway to find out if we need to be worried about biological affects," he concluded.

Far more controversial at the moment, though, are privacy issues. And these are being resolved in a variety of ways. In American airports already using the scanners, security officials who are doing the scanning are in a different area from the passengers being scanned. There is no personal contact so that all they see are the outlines of the body and they never see the scanned individual's face. Images can also be discarded immediately after scanning.

It is also possible to blank out or blur the face of the scanned individual, and German police are experimenting with reducing the resulting pictures to mere outlines. Elsewhere tests are also being done which keeps human involvement to a minimum; instead a computer scans the images and alerts security officials if something unusual is found.

Could Scanners Actually have Helped Flight 253?

The debate over the use of such scanners is far from over in Germany. Although the interior minister seemed more positive on Wednesday, Justice Minister Sabine Leutheusser-Schnarrenberger, a member of the Free Democrats (FDP) the CDU's junior coalition partner in the German government, remained more skeptical. In an interview with the daily Berliner Zeitung, she said that, "whether more technological controls could have stopped the attempted attack is only going to become clear once there has been a thorough investigation."

Germany's federal commissioner for data protection, Peter Schaar, agreed. Speaking to the same newspaper, Schaar said: "What surprises me is how quickly objections are being forgotten -- and before basic questions (about the event) have even been answered. What needs to be explained is how the explosives were smuggled through the security controls and whether this technology could actually guard against this. Additionally, should these scanners be introduced, human dignity and the protection of individual rights must also be taken into account."