Germans have traditionally been perceived as being reliable and hardworking, but they may have outgrown this reputation. These days, it seems their dark side is coming more to the fore, as one tire dealer found out first-hand when the local job agency sent him an applicant for a position as a mechanic.

As the interview proceeded, it became increasingly apparent that the applicant didn't really want the job. He even came with a laundry list of reasons why he wasn't a suitable candidate. Eventually he admitted that his social benefits weren't his only source of income -- he also ran an illegal tire fitting service. You've got to look out for No. 1, he offered as an excuse.

It fell on deaf ears. Outraged, the tire dealer wasted no time calling the job agency, a government office that seeks to find work for the unemployed, to tip them off. But officials there didn't want to hear what they were being told and instead suggested he keep his complaint to himself. If they started trying to track down welfare cheats, officials said, they would never get anything else done.

The tire dealer was one of 200 participants in a study, "The Double Lives of Germans," conducted by the Rheingold Institute for Qualitative Market and Media Research and released on Tuesday. An additional 1,060 people were interviewed in order to determine whether those answers had been representative in the study, which had been commissioned by a German brewing company. Surveyed on their view of Germany and its people, their responses suggested that Germans' fabled steadfastness is only skin-deep.

"Experiences like the tire dealer's have become more of an integral part of our day-to-day lives than we would like to think," said study leader Jens Lönneker.

The study revealed that pessimism is rife, with 70 percent of participants agreeing that Germany is somehow going down the drain. Most respondents said they thought they knew why -- with 88 percent blaming red tape and stagnation.

"Germans are not as honest, punctual and conscientious as people think," conceded 73 percent of respondents. "There are a lot of cheats among them too."

So for all their carping about the lack of a work ethic in Mediterranean countries, are Germans themselves actually slackers? Not necessarily, but according to Lönnecker, they do lead double lives -- they place a lot of emphasis on financial security in their working and retired life and they take pride in the many personal freedoms they have. "They live according to their own set of values but have little sense of social responsibility," explained Lönneker. Equally symptomatic of this retreat from public life is the fact that only 30 percent of those questioned felt that it was important to be politically active.

Ironically, however, 62 percent also complained about a perceived egotism and loss of values. Sixty-seven percent said they would like to see measures taken to counter this trend, with only 9 percent confident that politicians are capable of steering the country in the right direction.

Given that the majority of the study's participants believe the country is failing to evolve despite its relative economic stability, Lönneker added, "We need to spend more time thinking about what sort of country we want Germany to be."

But rather than rolling up their sleeves and doing something about society's perceived ills, they bury their heads in the sand -- or pass the buck to some non-government association or another, which they tell themselves has integrity, the report warned.

So will the euro crisis blow Germany's cover? The world's gaze has shifted to Germany in recent months, and while the country's efficiency might be widely admired, the preachy way it goes about setting an economic example has started to get on its partners' nerves.

"Many accuse Germany of having enriched itself with its attitude of being a role model," explained Lönneker. "Whereas Germans are annoyed that they're being criticized for what are seen as typical German qualities."

Increasingly, the view from abroad is that while Germans might act highly confident on the international stage, inside they seem highly neurotic. And at a time when Germany's European partners are demanding that the country show leadership and solidarity as the euro crisis unfolds, the country's citizens are instead worrying about their own prosperity. At the same time, 72 percent of participants in the study are convinced the country's Nazi past hinders Germany's political leadership from taking decisive action. People don't want to make a bad impression.

But Lönneker maintains that Germans do have a desire for change -- it's just taking them a while to get round to it. 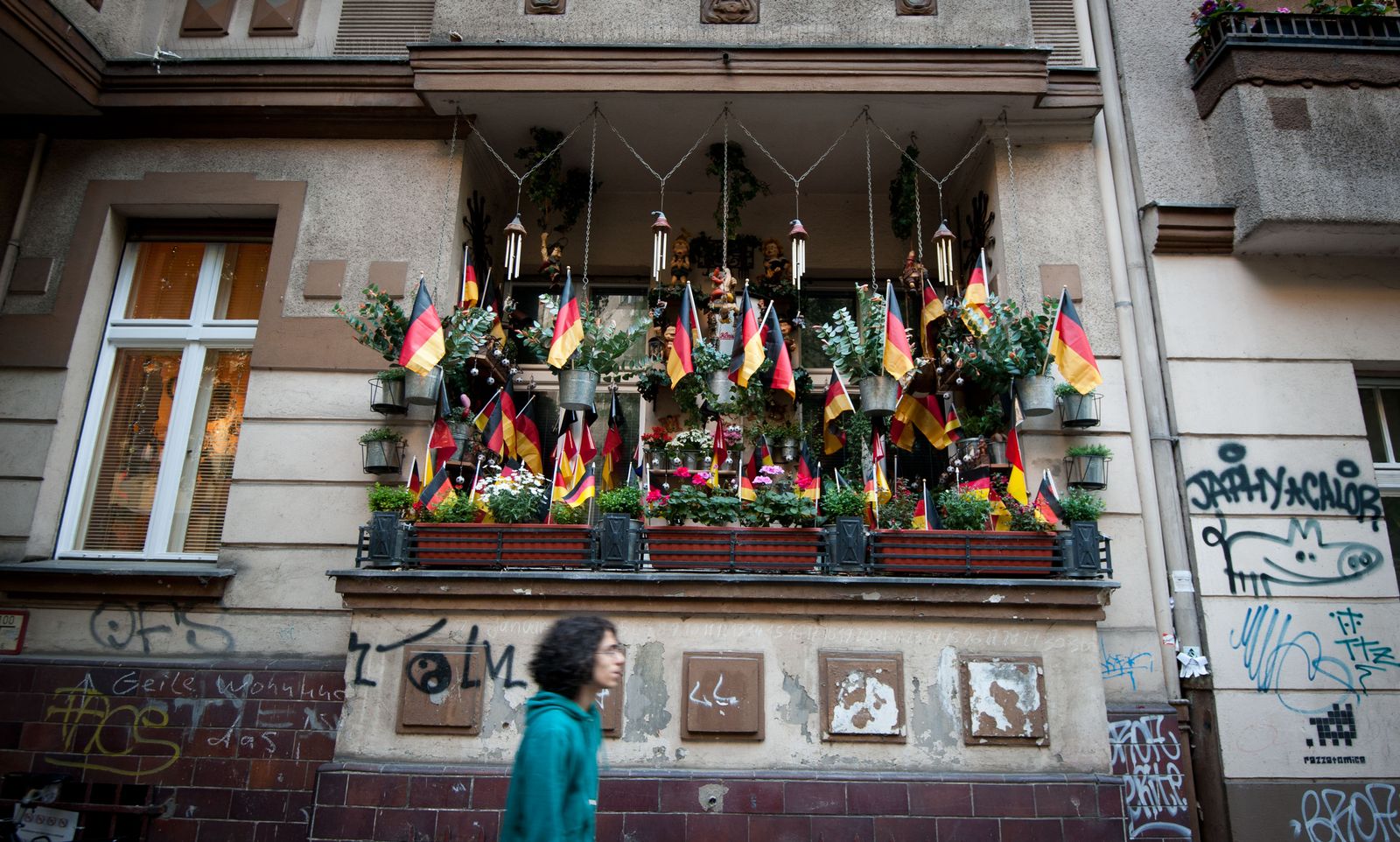 A pedestrian in Berlin walks by an apartment balcony filled with German flags: Is Germany going down the drain?