A study commissioned by the German government has reached a damning verdict on the country's efforts to boost its low birth rate, saying billions of euros are being wasted on complex benefits and tax breaks that are largely ineffective and in some cases counterproductive.

Europe's largest economy spends some €200 billion ($270 billion) on promoting children and families per year -- that's almost two-thirds of the federal budget. But its birth rate, at 1.39 births per woman aged 15 to 49, remains among the lowest in Europe and compares with an Office of Economic Cooperation and Development (OECD) average of 1.74.

The German government ordered a detailed cost-benefit study of its family policies five years ago. The panel of experts led by Basel-based consultancy Prognos has completed a 66-page interim report that SPIEGEL has seen.

Its findings could open up a major battleground in this year's election campaign because they amount to an indictment of 60 years of German family policy. Successive governments, whether from the center-right or center-left or grand coalitions, it seems, got it wrong. And some of the most expensive measures often yield the least benefit.

The study makes enlightening reading for those who wonder why Germany is consistently near the top in international rankings for family spending while its birth rate and job prospects for young mothers are near the bottom.

The government had pledged to release the findings in the current parliamentary term. But officials no longer seem in a hurry and it might not be made public before the September general election. That may be because the study supports calls by the opposition center-left Social Democrats and Greens for a massive expansion in preschool facilities and all-day schools, as well as caps on tax benefits for married couples.

The findings run counter to a traditional view of the ideal family still held dear by many in Chancellor Angela Merkel's conservative Christian Democratic Union party: Dad earns the money, Mom stays at home and looks after the children. That, say the government-commissioned experts, can no longer serve as the basis for modern policy-making.

The government's latest policy initiative caused intense controversy, with opposition parties saying it was trying to transport Germany back to the 1950s. Launched at the insistence of the CDU's staunchly conservative Bavarian sister party, the Christian Social Union, the "childcare allowance" will come into force this August -- and pay a benefit of €100 per month to stay-at-home mothers.

The authors of the study say that the current tax and benefit arrangements discourage women from working full-time when they have children, discriminate against unmarried parents and in general aren't making it easier for people to raise children.

Responding to the SPIEGEL article, Family Minister Kristina Schröder, 35, mother of a one-and-a-half-year-old child, defended her policies. "I don't regard family policy like an investment banker with the aim of profit-maximization," she told the Passauer Neue Presse newspaper on Tuesday. She said she was opposed to a policy "that focuses more on macroeconomic profit than on human solidarity."

Schröder called on companies to help boost the birth rate. "The most important thing is to adapt working life more to the needs of families instead of going on requiring families to keep on adapting to the requirements of the working world."

Manuela Schwesig, a deputy leader of the center-left Social Democratic Party, said: "The government's policy on families is shaped by a picture of the family that is half a century old. Single parents or couples with children but without a marriage certificate are virtually ignored."

The central question of family policy is whether the government should invest in education and preschool facilities or simply give families cash.

In Germany, governments have always chosen the latter option, not least because benefits and tax breaks tend to win votes. The problem is that the money often doesn't end up reaching the people who need it.

Take Claudia Kinski and Andreas Schulte*. They both work and are raising a child. He has a public sector job and works in shifts. She does security checks at a major airport. They always await their new shift rotations with trepidation. Will they have to work a lot of weekends this month? Will they have to start work at five in the morning or eight at night? The rotation determines how often Claudia will see her 11 year-old son, when she will need a babysitter, and for how long.

"Sometimes I have to ring him up from work in the morning to wake him up and tell him where he can find his breakfast," she says. "An hour later I ring him up again to make sure he leaves the house."

The fundamental problem that faces this family and many others is that they can't find adequate daycare facilities. They earn too much to qualify for most of the benefits, and they don't get tax breaks because they're not married.

The study criticicizes some of the main components of Germany's family benefits system:

The system is damaging the economy because it discourages women from seeking full-time employment. That's the vicious circle of the German tax and benefit system. The state hands out generous payments like the child benefit but in turn charges high taxes and welfare contributions on employment. As a result, almost 50 percent of working women in Germany are in part-time employment -- more than in most other European countries.

The study says a far more effective and cheaper way of helping families and boosting the birth rate is to open more preschools. It found that mothers with children aged up to three years who have found a place in a nursery work 12 hours hours more per week on average than mothers who haven't been able to find a place. The income gain is almost €700 per month before tax. It's a similar story for mothers of children aged between three and six years.

So nursing care expansion could be at least partly self-financing. "The rising employment activity of mothers and the resulting increased revenues from taxes and social contributions means that a large part of the original outlay would flow back to the state," the study says.

Here's an intriguing statistic: Germans aged between 25 and 29 can expect to receive family related benefits and tax exemptions totalling €133,400 by the end of their lives. That sounds like a tidy sum. But almost 85 percent of it consists of monetary and tax benefits that will have relatively little impact. Only 15 percent is in the form of tangible services like preschools.

Merkel's government doesn't see that as a problem. Family Minister Schröder praises the new childcare allowance for stay-at-home mothers as a "fair offer" and says she's a fan of the married couple's tax-splitting provision. "Marriage," says the 35-year-old, "has an intrinsic value for the state, even as a childless community of responsbililty."

But what many parents really need is a policy that integrates leisure activities into the school system, that pays babysitters more and does more to help private households that employ nannies.

Some Conservatives Realize Need for Change

Even CDU politicians are realizing this, especially at the local government level. Take Sonneberg in the eastern state of Thuringia. The town of 22,000 opened one of Germany's first 24-hour daycare centers two years ago. The project was initiated by CDU mayor Sybille Abel. It looks like a designer hotel and cost the city €1.4 million to build. Sonneberg has many car components firms and two large hospitals where people work in shifts. Unemployment in the town is just 3.6 percent. The new center, called Zukunft (Future) is the town's 14th nursery. It's a rare paradise for parents. "We as former GDR citizens evidently have different priorities in this regard," says Abel, referring to communist East Germany's good record on providing childcare facilities.

Even though the study's findings are critical of government policy, they provide Merkel with an opportunity to sweep aside outdated ideologies and start dealing with the realities of modern life. "It's time for a paradigm change in family policy," says one of the authors of the study.

Some politicians may mock subjecting children and families to such a rigorous cost-benefit analysis -- but there is no denying that family policy is a massive investment program in the future of society. As such, it should be a central focus of the election campaign.

*names changed at the request of the interviewees 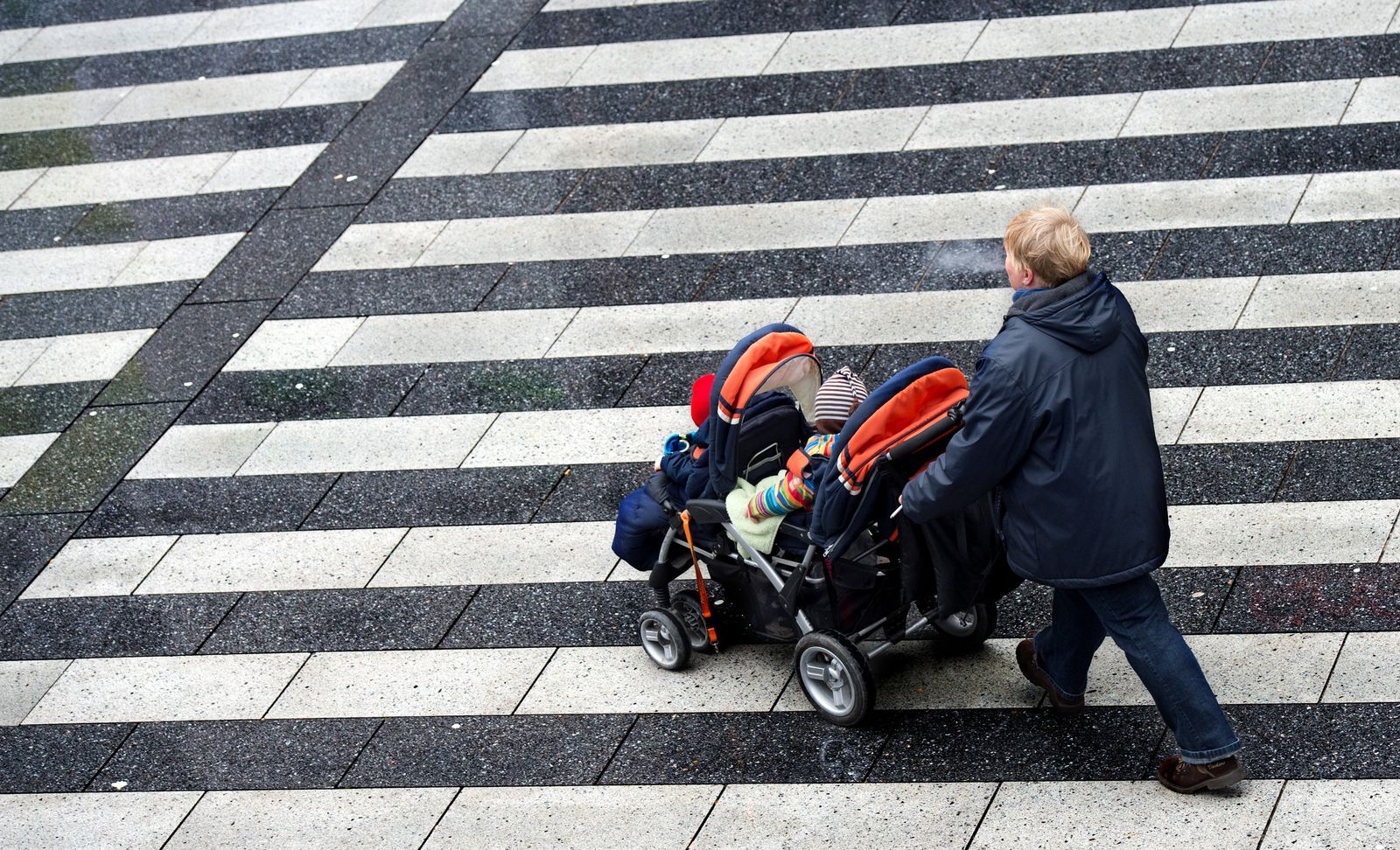 Germany dumps hundreds of billions of euros into its family policy each year, but it isn't paying off, with the number of births continuing to shrink.