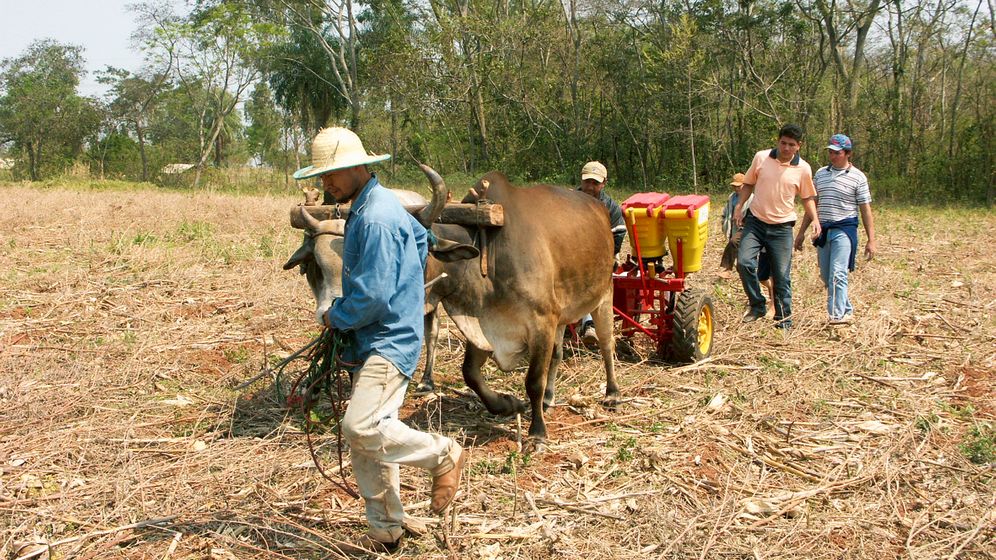 The building which local residents called "Casa de Citas" is on the outskirts of the Paraguayan city of Coronel Oviedo. The 300-square-meter (3,200-square-foot), two-story structure, its exterior now a faded pink, was officially a vocational training center for the Fundaciòn Kolping Paraguay (Kolping Foundation Paraguay).

Unofficially, however, from 2005 to the beginning of 2008, the center, which was funded by Germany's Ministry for Economic Cooperation and Development (BMZ), did less to promote training programs and more to support personnel with a very specific area of expertise. In Paraguay, the term "casa de citas" ("house of appointments") is slang for a brothel.

"Sometimes couples also came to the Casa de Citas," says Adelina Ayala, who was the cleaning woman. Her duties included disposing of empty bottles in the morning, cleaning the building and washing the linens.

Paid for with German Government Funds

Ayala, who is 74, has worked for the Kolping Foundation Paraguay for 20 years. According to the foundation's financial statements, which SPIEGEL has obtained, she received a monthly salary for her cleaning job at the house of ill repute -- paid for with German government funds.

A prostitute also allegedly received a salary from Kolping, supposedly to manage an optician's workshop in the building. The German Development Ministry and officials at the Cologne headquarters of the International Kolping Society say that they were completely unaware of what was happening in Paraguay.

The new director of the Kolping Foundation Paraguay, Brigitte Fuzellier, says that when she visited the building for the first time in March 2008, all she found there was a single old sewing machine. Regulated vocational training courses did not take place there, Fuzellier says. She adds that she reported the conditions to the Cologne-based manager in charge of Latin America, Peter Schwab, in 2008. Schwab says that he has no recollection of having received Fuzellier's report.

"I had opened up a can of worms," Fuzellier says today. "I had no idea what I was getting into when I accepted the director's position." Her predecessor, Máximo Samaniego, had left the foundation in December 2007 and had subsequently gone into hiding.

Hans Drolshagen, the managing director of the Cologne-based Social and Development Aid of the Kolping Society (SEK), says that there had been signs of irregularities since 2007. "That was why we sent Ms. Fuzellier to Paraguay," says Drolshagen. "To take a close look at what was going on there."

But perhaps she performed her duties more diligently than expected. SEK has since filed a criminal complaint against Fuzellier for libel and slander. Fuzellier had accused officials at Kolping headquarters in Cologne of obstructing the investigation into the alleged abuses.

The German Development Ministry provides funding for self-help activities carried out by "disadvantaged demographic groups" in Paraguay. Since 1999, the ministry has paid more than €3.6 million ($4.7 million) to the SEK in Cologne, which is responsible for the aid projects. The European Union also contributed funds to the program until 2009.

One of the stated goals of the Kolping Society is to "enable its members to prove themselves as Christians in the world." The organization supports vocational training and projects designed to help people help themselves in more than 60 countries. The beneficiaries of the programs are small farmers and the poor, who join forces to form so-called "Kolping families." In Paraguay, the Kolping Foundation runs nine vocational schools for more than 3,000 students, and supports hundreds of farmers, who receive microloans from the religious organization.

'They Trusted the Good Name of Kolping'

But according to the statements of some of the supposed beneficiaries, as well as the documents SPIEGEL has obtained, a few of the aid projects existed only on paper. "We had to sign blank documents," says Antonia Olmeda, a farmer. The farmers believed that everything was in good order. "They trusted the good name of Kolping and the Catholic Church," says Mario López, a priest who is advising the farmers.

Máximo Samaniego, the then director of the Kolping Foundation Paraguay, reportedly used German Development Ministry funds earmarked for loans to small farmers to buy a run-down villa next to the local Kolping headquarters building. Apparently, no one noticed what was going on, neither the managers at the SEK headquarters in Cologne nor the officials at the Development Ministry -- even though the ministry is required by law to perform an efficiency review after the completion of each assistance program.

In the meantime, Development Ministry officials in Berlin have requested an outside audit to examine the possibility of the "misappropriation of federal funds." The auditors plan to travel to Paraguay in mid-August to examine the foundation's books. A final report is expected in mid-September. The ministry says that this is a perfectly normal procedure, and that three officials have been assigned to the case.

Back in April, the international auditing firm PricewaterhouseCoopers conducted an "orientation review" of the Kolping Foundation Paraguay on behalf of the Development Ministry. The South American auditors reported that they had found "indications of fraud" and recommended a further investigation. They also said that they had received information suggesting that "Kolping Germany may have known about what was going on in Paraguay."

In fact, the foundation's accounts were in a shambles. Documents and statements were missing or incomplete, says Fuzellier, and the organization's internal books were poorly organized and confusing. Fuzellier discovered that the foundation could no longer issue any official invoices, because it hadn't paid taxes in years and had not disclosed its financial statements.

Fuzellier found 323 signed checks worth about €164,000 in her predecessor's safe. Samaniego had signed most of the checks, and on some checks the account number had been cut out. They were issued to the Kolping Foundation, with the words "European Union" in parentheses.

Fuzellier believes that the checks were intended to conceal a shortfall in the statements for the EU funds. The foundation's accountant, Jorge Enrique Caballero, had apparently pasted photocopies of the checks to billing forms to simulate expenditures. "The checks were then listed on the internal balance sheet," says Fuzellier, adding that the money was never received in the Kolping accounts. So what happened to it?

"I have absolutely no idea," Latin America manager Peter Schwab told SPIEGEL. "Whatever the reason was for the existence of these checks, they were not cashed, which means that no harm was done as a result."

'We Have to Be Prepared'

But even Schwab must have known for a long time that something was amiss. In a May 2008 letter, he asked the foundation's accountant not to present all of the statements at once. "You can imagine that we are very concerned," Schwab wrote. "Of course, our intention is to avoid having to reimburse the German Development Ministry  For this reason, we ask that you hold off before presenting the final version." It sounds as if Schwab had a bad conscience, at the very least. In an October 2008 email to Fuzellier, Schwab warned that the matter could even be of interest to the press. "We have to be prepared," he added.

SPIEGEL has learned that there were apparently also financial discrepancies in the construction, expansion and operation of Kolping houses in Paraguay. The EU had provided much of the funding for the construction projects, which, on paper, represented a supposed investment of about €1.5 million. But appraisers estimated the market value of all of the properties combined at only €650,000. Did they decline sharply in value, was it a bad investment or was it simply fraud?

In February, Jorge Enrique Caballero, the Paraguay foundation's former accountant, also made himself scarce, like the former director Máximo Samaniego before him. Caballero reportedly took some of the documents with him. Fuzellier estimates the total loss incurred to date by the German Development Ministry, the EU and the Kolping Foundation Paraguay at upwards of €2 million.

Meanwhile, the SEK denies all accusations and has distanced itself from Fuzellier, but it does support the Development Ministry audit. Besides, as Hans Drolshagen, the SEK's managing director, told SPIEGEL, the organization had long urged Fuzellier "to go ahead and file a criminal complaint if she has any substantive evidence." She followed this advice in November 2009.

Even the Vatican has since become involved. In Rome, Cardinal Stanislaw Rylko suggested "that those responsible for the irregularities be ejected from the foundation immediately."

Things have changed in Coronel Oviedo. Today the former "Casa de Citas" finally offers vocational training, in the use of computers and sewing machines. For the last two years, Adelina Ayala, the cleaning woman, has been receiving the legal minimum salary of €350. It's €300 more than she used to be paid.