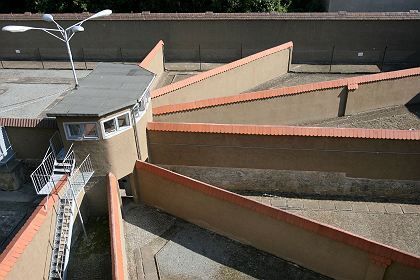 The Stasi prison Bautzen II. Some former Stasi agents feel they are being discriminated against.

"Stasi methods!" It's one of the worst insults one can level at the German state -- referring as it does to the heavy-handed authoritarianism of the East German secret police. But even now, almost two decades after Germany's reunification, it remains a popular insult among politicians in Berlin. Just recently, Bundestag Vice President Wolfgang Thierse lambasted elements of the country's pre-G-8 security plan of using "police-state methods like in East Germany."

Just another sign, says former East German Hans-Herbert Nehmer, that deep -- and even hostile -- divisions remain in Germany. "The Cold War," he says, "continues on German soil." But he goes even further. A former judge in the communist German Democratic Republic (GDR), he thinks his East Germany remains under constant attack. Germany is dominated by West propaganda and anti-communist hardliner politics which bedevil the image of the GDR.

The outspoken pensioner is one of the organizers of the 1,500-member Society for Legal and Humanitarian Support (GRH) in Berlin. It is a group which has chosen an unlikely clientele to represent: it campaigns on behalf of East German officials -- former spies, border patrols, communist judges like Nehmer, and others -- who consider themselves unfairly persecuted in reunified Germany. Not surprisingly given the cause it has chosen, the organization has attracted no small amount of criticism from politicians and journalists. For Nehmer and his aides, such reactions are yet one more example of the discrimination we have to put up with in the Federal Republic of Germany, as he puts it.

Growing Attention on the Stasi

Nehmer's group has had a lot to keep an eye on recently. Even before Thierse's comment -- a reference to the scent samples German police took of potential G-8 trouble makers last month -- there had been a growing interest in the East German state and in the East German secret police. As Germany begins to shift its focus from the World War II excesses of the Nazis to its more recent past, the country's divided, Cold War history is moving increasingly into the spotlight. The recent Oscar-winning film "The Lives of Others," which tells the story of a playwright monitored around the clock by a Stasi agent, is just one example.

For most in the West, it is a simple story. The GDR was a dictatorship, the Stasi was its evil intelligence arm and the GRH romanticizes East Germany's police-state methods. Politicians have likewise lobbied against the group, calling on Berlin's state intelligence agency to monitor it. Indeed, the GRH was declared "hostile to the Federal Republic of Germany," last year, though it was found not to be dangerous. Journalists have cast a critical eye on the group and have reported widely on the ideologically charged activities of GRH members, such as disrupting services for East German victims or lobbying for the closure of the memorial site at the former East German Stasi prison in Berlin Hohenschönhausen.

The three-room GRH office sits on the fifth floor of the publishing house of the former GDR party paper Neues Deutschland in East Berlin. The streets in the neighborhood, which used to be on the eastern side of the Berlin Wall, carry the names of such communist icons as Karl Marx, Rosa Luxemburg or Karl Liebknecht; the architecture is socialist realism at its most grim. Gray-haired men in their fifties and sixties drop into the office every now and then, referring to each other as comrade or cadre. Many of them come to seek advice from Dieter Stiebert, 58.

'Want To Bring Out the Truth'

Stiebert is manager of the GRH and a veteran of the East German secret service. He is on a mission to resurrect the image of the GDR which he believes has been grossly distorted by Germanys pro-Western politicians and journalists. The propaganda which started in 1989 (when the Berlin Wall fell) has been painting a completely different picture of the GDR from how we experienced it, he says. We want to bring out the truth. Books published by the GRH -- with titles like "Winner's Justice," on the post-reunification German justice system, or "Attack and Defense," on the Stasi -- are part of that effort. 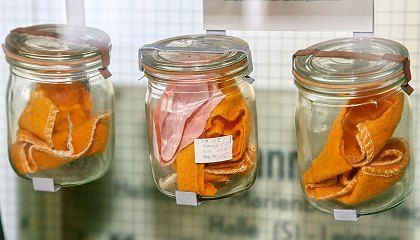 Smell samples taken by the Stasi, on display in a musuem in Leipzig.

From the point of view of the GRH, former East German border guards and Stasi agents are now being mistreated for doing things that were legal under GDR law. The group offers legal help for those being "persecuted" for their activities as East German citizens as well as support for their families should they need it.

But what does Stiebert himself think about the former East German secret police? He goes quiet for a moment. I worked at the Ministry of State Security for 23 years, he says thoughtfully. And I believe that because of the Cold War it had a right to exist. He talks about defending the GDR against external threats and of gathering information about fascism in Western Germany.

He says little, however, about torture, oppression or the widespread monitoring of the population -- carried out by fully 102,000 full-time Stasi officers and non-commissioned personnel in addition to as many as half a million so-called inoffizielle Mitarbeiter, private citizens who cooperated with the Stasi by spying on their friends, neighbors and co-workers.

What we did was necessary, Stiebert insists. But then he admits: There were a few things which didnt really relate to security.

Unable to Lead a Normal Life

It is not difficult to find those who take issue with Stiebert's version of events. Indeed, many former Stasi prisoners claim that the German government isn't doing enough to compensate victims for their sufferings. Mario Falcke is the Web editor for Stasiopfer, a support group for former East Germans persecuted by the secret service. Jailed twice from 1983 to 1984, Falcke says his experiences have left him unable to lead a normal life. There was no physical torture as such, he explains, but the psychological treatment of the inmates was soul-destroying.

The emphasis when looking at East German history, he says, is far too focused on the Stasi and those who worked for it. Their 80,000 to 100,000 victims, he argues, have not received nearly as much public attention. "The current system is too accommodating to the perpetrators and punishes those who were prosecuted by the Stasi once more, he says.

Falcke might have a point. The German government recently passed a proposal to provide those persecuted by the Stasi a pension of €250 ($341) per month -- but only if the recipients have been imprisoned for at least six months and earn less than €1,035 ($1,412) per month. Additionally, as of November 2006, only those applying to senior civil servant positions -- such as judges and politicians -- must have their backgrounds checked for Stasi activities.

Stiebert, for his part, feels "hurt and unwelcome" in reunified Germany because of his Stasi past. After the reunification, he lost his job until he found work at a company which did not screen its employees for secret service activities. Who is the victim here?, he asks.

Hans-Herbert Nehmer, the former GDR judge, is also adamant that he has been unfairly persecuted. I was tried by this alien justice system in 150 cases for my work in the GDR, he sneers, but they couldnt get me for anything. Due to the statute of limitations, he got away with just one probation sentence, proof for him that he was innocent.

He still sees nothing wrong with his past work, which included the prosecution of political opponents like Falcke. I had to prosecute them because we lived in East Germany and they violated the law," he says. I dont feel guilty about anything.