Authorities in Germany have warned of a worrying new tendency within the far-right scene -- the rise of violent "anarchist" neo-Nazis. 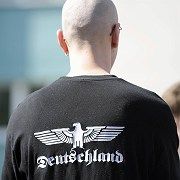 An NPD supporter at a march on May 1 in Berlin: The party saw a slight decline in membership in 2008.

Heinz Fromm, the president of Germany's domestic intelligence agency, the Office for the Protection of the Constitution, warned Tuesday of a "new phenomenon" within the far-right scene. Presenting the agency's 2008 report in Berlin, he said that over the last two years a scene had emerged of "anarchist" neo-Nazis who dress similarly to the so-called Black Bloc of far-left anarchists and who deliberately seek violence at demonstrations. He put the number of so-called "right-wing anarchists" at between 400 and 500 people.

The report also reveals there were 19,894 far-right crimes reported in Germany in 2008, an increase of almost 16 percent over the previous year. Of those, 1,042 were acts of politically motivated violence, an increase of 6.3 percent over 2007. Most of the other crimes were propaganda offenses.

According to the report, membership of the far-right National Democratic Party (NPD) declined slightly last year, from 7,200 to around 7,000 members. However the role of neo-Nazis within the party has grown, said Interior Minister Wolfgang Schäuble. "The neo-Nazi part of the spectrum is gaining greater influence within the NPD," he said. The NPD, which has seats in two state parliaments, officially rejects violence and avoids explicit Nazi references.

Fromm rejected speculation that the NPD could be facing collapse, saying that the party's current financial crisis would not lead to it being unable to operate "within the foreseeable future." The party is in dire financial straits due to, among other things, a €1.27 million ($1.73 million) fine from the German government because of irregularities found in the party's 2007 financial statements. The fine was originally set at €2.5 million but was later halved by a Berlin court.

Schäuble rejected proposals to ban the NPD, saying that the legal obstacles to such a ban were high and there was a significant risk that an attempt would fail. A previous attempt to ban the party in 2003 collapsed when it was revealed that many of the witnesses for the prosecution, including high-level members of the NPD, were in fact government informants who had penetrated the party.

Schäuble and Fromm also warned of the threat of Islamist terrorism in Germany. Although there has not been a successful Islamist terror attack in Germany to date, that was no reason for complacency, they said. "We are still in the cross-hairs of violent Islamists," Schäuble warned, saying that the German military's mission in Afghanistan is "a thorn in the side" of Islamists.

There are "significant" numbers of potential Islamist extremists in Germany, Schäuble said, including converts to Islam. Many Islamists have traveled from Germany to Pakistan to attend al-Qaida training camps and there have been messages from terrorist groups clearly targeting Germany in recent months. Certain Muslim groups in Germany, such as the Islamist Milli Görüs movement, want to introduce Sharia law in Germany, the agency warned in its report.

Schäuble also talked about the threat of far-left violence. Anti-military action was the focus among left-wing extremists, he said, adding that police officers were attacked with a "horrifying lack of restraint" during the May 1 riots in Berlin and elsewhere. The threat from left-wing extremists is clearly seen in the massive increase in arson attacks on vehicles in 2008, the report says.