He put the first cracks in the Iron Curtain, fissures that spread until the Berlin Wall collapsed. Last week, Lech Walesa was in the German capital to reprise his role in the symbolic toppling of 1,000 outsized dominoes set up along the course of the once-feared Wall.

But when the former Polish president stepped forward last Monday evening to demolish the metaphorical barrier, he also managed to topple a cameraman riding by on a Segway in order to capture the chain of events. And, according to a Polish radio report on Sunday, he injured himself in the process. 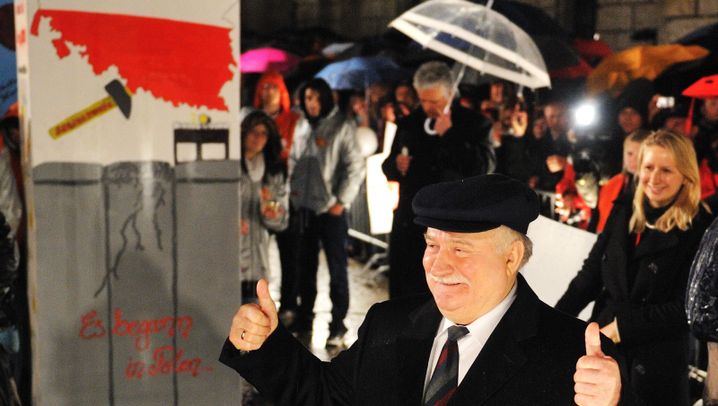 The incident was caught on camera, and shows Walesa taking a step backward to admire the falling dominoes for himself. But the Segway-riding camerman tried to cut it too close and clipped Walesa's back. The Nobel Peace Prize laureate lost his balance and caught himself on the already toppled first domino, but the cameraman went flying.

At the time, it appeared Walesa was unharmed in the incident but over the weekend, Walesa told the Polish radio programme TOK FM that over the last week, his injuries have become more painful, making it difficult for him to walk or get off of the sofa without assistance. The difficulties prompted a trip to hospital, where doctors found he had a torn leg muscle and a spinal injury. According to Polish tabloid Fakt, he has been told to return to the hospital for a follow-up.

Walesa had been invited by Germany to knock over the first domino as a tribute to his efforts to organize Gdansk shipyard workers in the early 1980s. His Solidarnosc movement soon spread throughout the country, ultimately resulting in the fall of the communist government in Poland. Walesa became Poland's president soon after communism came to an end in the country.