In Germany, the revolution against the financial system is already raging -- at least on the Internet. A cyber class war with photos, videos, texts and plenty of symbolism is in full swing. In the video messages calling for a nationwide protest in Germany this Saturday, images of the Frankfurt bank skyline are juxtaposed against paintings of the German Revolutions of 1848. Beethoven's "Moonlight Sonata" is mixed with the orchestral pomp of the "Requiem for a Dream" movie soundtrack.

"Something is going to happen on Oct. 15," the cyber revolutionaries pledge. Thousands will supposedly rise up in Germany alone so the "people can take back control from the dictatorship of money." "It began in New York," the call to action states, "but it will end in Hesse," a reference to the western German state where Frankfurt is located.

Thousands of outraged Americans have occupied Zuccotti Park near Wall Street in New York for weeks now, and protesters in a growing number of cities in the United States are joining the revolt, starting their own protest camps. What began on Sept. 17 in Zuccotti Park now appears to be spreading to Europe. German activists are seeking to bring the phenomenon to Germany, where protest events are being planned in dozens of cities across the country, starting on Saturday. In the German financial center Frankfurt, protesters are expected to march to the European Central Bank on Saturday. Elsewhere in Europe, events are planned in Paris at the Place de la Bourse, in London outside St. Paul's Cathedral and in many other European cities.

The statements in the protest announcements are in no way modest. "In this room all of my dreams become realities," one protest video states. "And some of my realities become dreams." The quote comes from the Roald Dahl children's book "Charlie and the Chocolate Factory." In the context of the desired revolution, it can be interpreted in a number of ways.

The most obvious interpretation is that, if you believe hard enough, you can achieve anything you dream of -- in this case, an economic system that treats all citizens fairly and punishes banks for the worst excesses of their casino capitalism. But one could also interpret the quote this way: For now, the room in which all dreams become true will remain a virtual one. After all, it is a lot easier to set up a protest camp on the Internet than in the real world. Can it function on Germany's streets, with freezing night-time temperatures?

Sympathies in Germany for American Movement

The kind of sheer anger that can lead to the birth of protest movements is indeed considerable in Germany -- at least at first glance. Germans see themselves every day as being confronted with a world in which overly powerful banks cash in as the rest of the world is forced to pay for the consequences of their errors, a world where the major banks are still profiting from the same kinds of dubious financial products that led to the first outbreak of the crisis in 2008. It is a world in which politicians are as frustrated as the people, given that it has proven nearly impossible to regulate financial institutions and stop waves of speculation. On top of that, it now appears that the state will soon have to bail out numerous banks again.

Regardless whether people are living on Germany's €350-a-month social welfare benefits or have a salary of €250,000 a year, it is not hard to find people who believe the current system is unfair. When the Wall Street protesters claim, "We are the 99 percent. We are getting nothing, while the other 1 percent is getting everything," they are likely to get 99 percent sympathy in Germany -- perhaps even from some dyed-in-the-wool investment bankers.

"They will tell you that you are dreaming," Slovenian philosopher Slavoj Žižek said in a speech at the New York protests on Monday. "We are not dreamers, we are the awakening from a dream which is turning into a nightmare." The true dreamers, he said, "are those who think things can go on indefinitely" with the injustices of the global economic system.

But the situation in Germany is hardly comparable to that in America. Whereas many people in the US who are protesting have lost money or even their jobs in the crisis, few have been directly affected in Germany. "Unemployment is far lower than in the US," said protest researcher Wolfgang Kraushaar. "The German social system functions considerably better than in the US." One other important element is lacking in Germany: disappointment over Barack Obama, the man many Americans had pinned their hopes on to improve their society. Now they are realizing that the president is largely powerless against the lobbyists of the defense and financial industries.

"It will be markedly more difficult to mobilize people in Germany," said Dieter Rucht, also a protest movement researcher. "But it is not impossible." Research has shown that it was by no means only unemployed people who participated in the 2004 "Monday demonstrations" in Germany against unpopular social welfare reforms, which included steep cuts in benefits for the long-term unemployed. Around one-third of protesters were civil servants and higher income earners. They viewed participation in the marches as a social responsibility.

But the question of whether a revolt like the one being witnessed in the US could also take shape in Germany, he said, would hinge on how effectively it was organized. In fact, the first attempt already failed. On Sept. 17, protestors tried to start an "Occupy Frankfurt" campaign at the same time "Occupy Wall Street" began. Only a few dozen people turned out for the protest and far fewer stayed overnight. The protest soon disbanded peacefully.

'Thousands Have Joined Our Movement'

But this time the protesters argue they are better prepared. "Thousands of people have joined our movement on the Internet," said Colin Below, who has organized the Frankfurt protests. A number of larger networks are also helping to organize the protests, including the globalization critics at Attac and the Internet rebels from Anonymous. The Left Party and the major Ver.di union are also supporting the protests. "That's why we are expecting greater participation on Oct. 15," Below said.

Whether or not the activists will hold out for a long time is another question. The "Occupy Germany" faction appears to be hoping for a kind of revitalization of the mass anti-capitalist movement seen in Germany that began around the turn of the century and culminated in the at times violent and often creative mass protests at the G-8 summit in Heiligendamm in 2006. Attac is also hoping that the Occupy Germany movement can help it to regain its erstwhile status as a significant movement.

In general, Attac is the driving force behind many of the protest events -- and steers some demonstrations in questionable directions when it comes to the issues they champion. For example, a flyer that Attac distributed at a demonstration in Frankfurt proclaimed that: "The troika is symbolically driving the people of Europe to the European Central Bank." There, they are supposed to "sacrifice democracy, social security and the provision of public services to financial-market actors." The argument is based on a number of assumptions, including that "the ECB is one of the most powerful democracy-free zones in the EU" and that it "has primarily acted in accordance with the interests of the financial industry for years."

It seems to elude explanation why the ECB, of all financial institutions, should be declared the root of all evil rather than, say, Deutsche Bank or the Frankfurt Stock Exchange. "It is a pseudo-focus that is both unreasonable and exaggerated," says Kraushaar, the expert on protests, adding that this kind of argumentation surely does little to win over broad segments of the population to the group's cause.

In addition, there are also bureaucratic hurdles: According to city officials, the camp that the protesters hope to set up in front of the ECB is supposed to be cleared away by 3 p.m. on Oct. 19 at the latest because another event has been scheduled for the area. In response, the protesters say that the events won't get in each other's way -- and that people may well stay there longer. 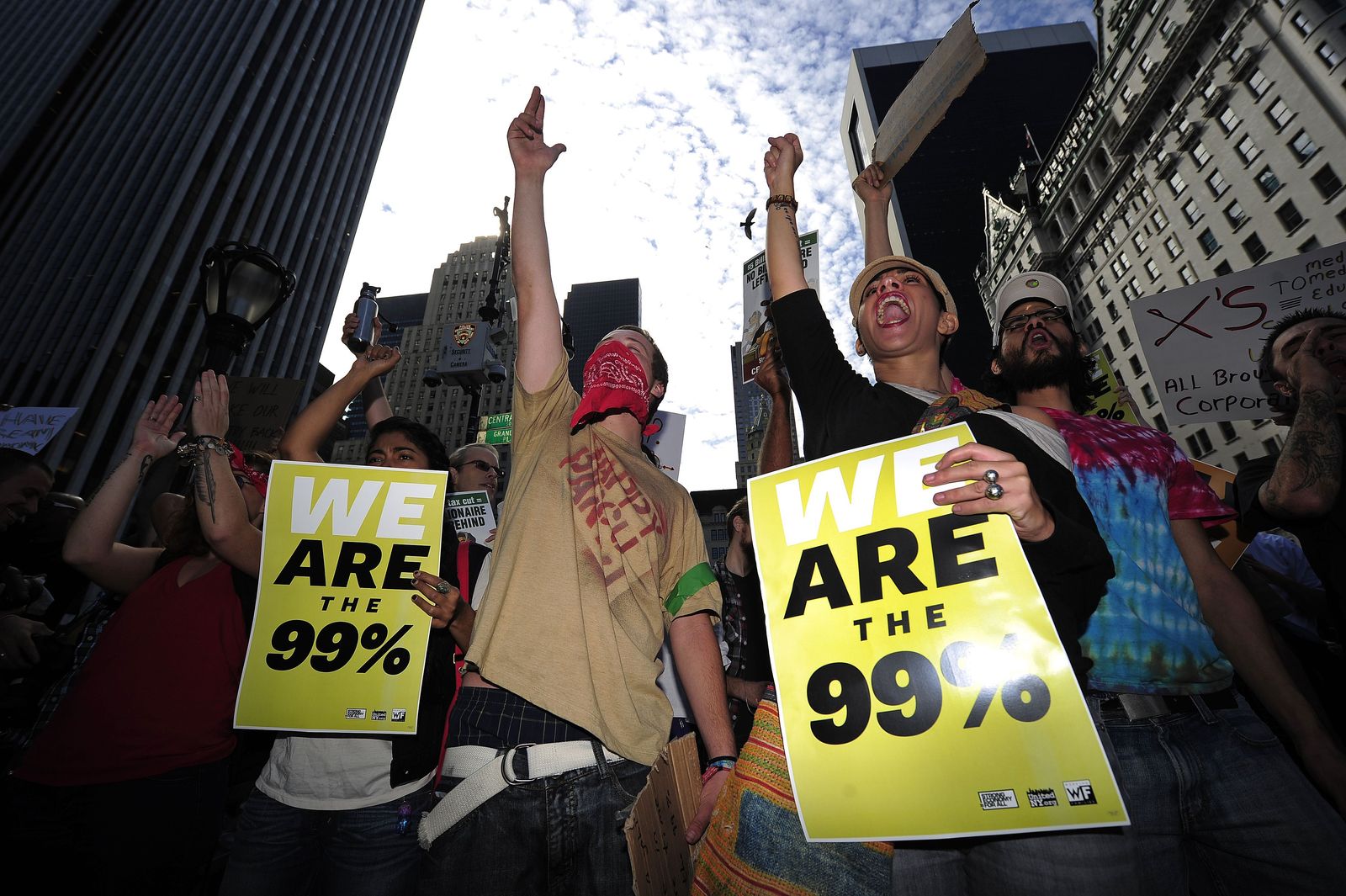 Protesters on Wall Street in New York: Will the movement cross the Atlantic to Europe?