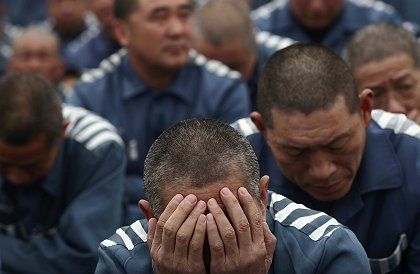 Inmates of a prison in Changchun, northeast China. The German parliament wants to ban imports of goods manufactured in Chinese labor camps.

The Chinese delegate's manner was far from diplomatic -- Zhao Bin complained that the misspelling of his name on the card in front of him "entirely unprofessional" and an "affront." The Chinese diplomat was directing his anger at a handful of members of the German parliament, the Bundestag, in late April.

The Germans probably always work this sloppily, he speculated. Zhao ranted that "everything was wrong" in the parliamentary motion to condemn the system of laogai camps in China. He then asked to speak to the members of parliament himself. The motion used the vocabulary of the "Cold War," he insisted, adding that relations between Germany and the People's Republic of China could deteriorate significantly if the Bundestag were to pass the motion. Zhao added that he refused to tolerate this kind of meddling in his country's affairs.

All the threats and saber-rattling were to now avail. Despite China's vocal disapproval, the Bundestag passed motion 16/5146 on Thursday evening of last week.

"In more than 1,000 prisons, work camps and supposed psychiatric clinics," the motion states, "dissidents are incarcerated and politically re-educated without due process." According to the motion, besides being subjected to political brainwashing, the prisoners are forced to perform hard and unpaid work -- for up to 16 hours a day, seven days a week, with only three to four days off a year.

Not only does the motion call upon the German government to condemn the camps, where between four and six million criminals and drug addicts, political dissidents and homosexuals are thought to be imprisoned. The motion also urges Germany to introduce a label that would henceforth provide consumers with a guarantee that the product they are purchasing has not been produced using laogai inmates.

The International Society for Human Rights (ISHR) called the German parliament's initiative a "human rights sensation." But the decision is also part of a trend: After consumer protection associations spent decades struggling to force producers to list the components in their products -- sometimes down to the milligram -- they are now also calling for transparency in labor conditions, which are often the decisive factor when it comes to competitiveness.

A growing number of these kinds of standards are finding their way into laws and regulations. Hundreds of German cities and boroughs are boycotting Indian suppliers of natural stone, if it's not possible to verify that the stone didn't come from quarries where child labor is employed.

In terms of public procurement law, of course, such boycotts are still illegal. But Germany's Economic Ministry is currently working on a new version of the law.

The law will use the basic "international labor standards" developed by the International Labour Organization (ILO) as the minimum standard that public clients can demand from their contractors. According to those standards, neither children nor persons peforming forced labor may be involved in production. Moreover, the company in question has to implement a ban on discrimination and its workers have to be free to organize in trade unions.

According to the ILO, more than 12 million people perform forced or slave labor worldwide, mainly in developing or newly industrializing countries -- even when the terrible working conditions are officially prohibited there.

But forced labor also happens in Europe. In Spain, for example, police recently caught a group of human traffickers who had violently forced 91 mainly Portuguese workers to perform agricultural work for less than €2 ($2.70) an hour.

And, according to the ILO, there are about 15,000 people in Germany who are forced to work. More than half of them are estimated to be foreign women who are exploited in bars and brothels.

But consumers are increasingly sensitive to the issue. And many countries are trying to establish minimum social standards. Belgium, for example, has introduced a so-called "social label." France is working on a similar model. In the United States, customs authorities can -- in theory -- impose heavy penalties when an importer carries products that were manufactured using forced labor.

But delivering proof that goods were indeed produced using forced labor remains difficult as long as there is no widely recognized labelling system. Such a system would require sending independent observers to inspect labor conditions before the label could be issued.

Organizations such as the United Nations Children's Fund (UNICEF) do already document breaches on the use of child labor. And, in the case of the China's labor camps, the Laogai Research Foundation, founded by former inmate Harry Wu, annually compiles a list of firms that employ laogai inmates. But the US customs authorities have so far only ever imposed one fine on a company: for $50,000.