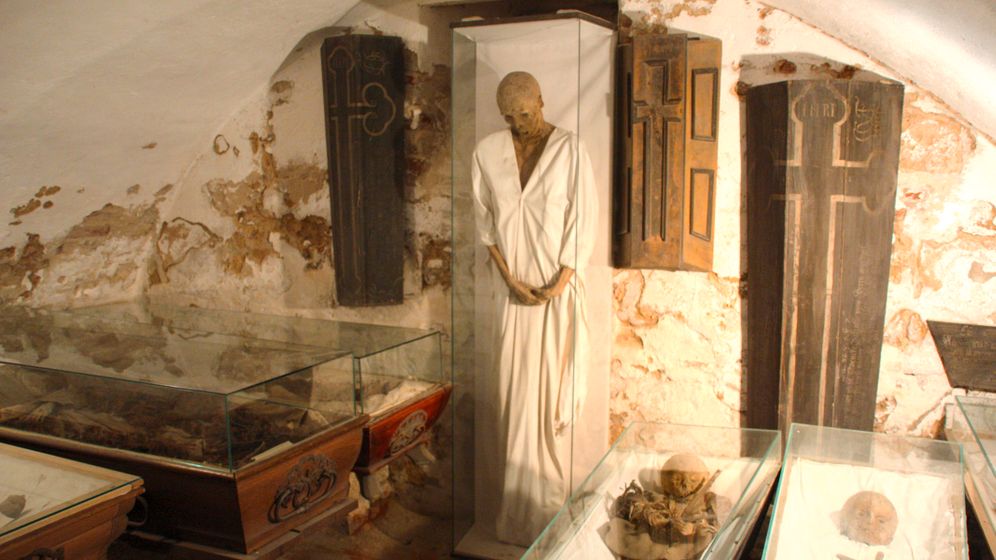 Photo Gallery: Return from the Crypt

Baron von Holz had a difficult lot. During the Thirty Years' War, von Holz fought in the Swedish army as a mercenary, but he was not granted a hero's death on the battlefield. He was cut down, rather less heroically, at the age of 35 by either the flu or blood poisoning. And it was only in death, that his situation really improved.

His family dressed his mortal remains in precious calf-leather boots with nailed soles. The warrior was then laid out in a kind of luxury crypt under the castle of Sommersdorf near Ansbach, in modern-day Bavaria. In those vaults von Holz's corpse was privileged with an honor previously reserved primarily for Egyptian pharaohs: His body did not decompose.

More than 370 years after his untimely death, the nobleman still lies in his casket, well preserved. Von Holz was a giant of a man, standing 1.80 meters (around 5'10"), at a time when most humans were far shorter. To this day, his feet are still shod in those smart leather boots that his clan had made for him almost four centuries ago.

The corpse recently left its burial place in the castle cellar for the very first time so that archeologists from the Reiss Engelhorn Museums in Mannheim could take a close look at the mummy. It quickly became clear that the boot-clad baron had no external injuries and he seems to have been in excellent health when he contracted his fatal infection. What remains unclear is why the aristocratic soldier's body was mummified in the first place.

Only a handful of scientists take an active interest in the leathery corpses that are recovered from boggy moorlands or cellar vaults in Germany. Every few months, a baron, or a priest, turns up at archeologist Wilfried Rosendahl's door to report that he has found a corpse under his castle or in his parish church.

Confronted with the ever-increasing number of new discoveries, Rosendahl concedes that: "We are more familiar with the history of the Egyptian mummies than with the bodies slumbering in our tombs."

Only a few weeks ago, the researcher discovered the superbly preserved bodies of 12 members of an aristocratic family in the district of Illereichen in southern Germany.

Why did German Nobility Dabble in Mummification?

Rosendahl's colleague Andreas Ströbl is currently examining the remains of an 18th-century nobleman's clan that was laid to rest in a cellar grave under the 18th century Church of St. John the Baptist in Hannover. "We've known that these aristocrats' crypts existed, but for a long time we didn't know why," Ströbl admits.

About 1,000 mummified bodies in German noblemen's graves have been discovered and cataloged so far. The vaults contain children as well as adults, their clothes are sometimes still in remarkably good condition. Often the tombs also contain burial objects: Combs, spices, coins, and in one case, a shaving brush.

The surprizing number of tombs containing mummified remains leads researchers to the conclusion that it was not random. "For a long time, I believed that mummification was more of an accidental corollary of the way people were buried in those days," Ströbl says. New evidence suggests something different: In this early modern period did many of the rich and aristocratic deliberately have themselves buried in this way so that their remains would be preserved?

A Mausoleum with Ancient Air Conditioning

There is scant source material -- but Ströbl did find a "smoking gun": In a letter, written in 1710, to the board of the parish church of Berlin, a woman called Catharina Steinkoppen made a request for her deceased granddaughter. Namely, that "the aforementioned corpse should not decay in the vaults below the church." The girl's father -- a courtier by the name of von Schütz -- offered the stately sum of 10 Reichsthalers, the equivalent of a year's wages for a coachman, for the service.

A total of 140 mummified bodies lie in a crypt below a church near Alexanderplatz in central Berlin. It has been known for some time that this was the exclusive domain of deceased members of rich or highly respected families. But the fact that church leaders in Berlin deliberately set up the biggest mausoleum in Germany is a more recent discovery.

After the discovery of the grandmother's petition, researchers examined the nobleman's crypt in the historic center of Berlin. What they found was an extremely effective ventilation system running through the tomb. All the burial chambers were connected to each other by a series of small shafts. As such this underground graveyard was always well ventilated.

Indeed Rosendahl and Ströbl found cleverly conceived ventilation systems in even the smallest of these basement graves. But that wasn't the only trick that promoted mummification. The undertakers lined the coffins of the departed with sawdust which then soaked up any fluids that leaked out of the body.

Embalming in Time For Judgment day

Over the course of time though, many of the carefully created burial sites were destroyed by careless construction work. On more than one occasion, unsuspecting builders bricked up important ventilation shafts. In addition, to deter plunderers and grave robbers many churches bolted shut the windows of their crypts. Often enough, that sealed the fate of these historic tombs. Once the cross ventilation was cut off, the mummies began to rot within weeks.

But archeologists are still at a loss to explain why Germany's rich had themselves mummified in the first place. There is, however, one potential clue: Up to 99 percent of the crypt mummies have been found in areas of the country that were Protestant. The finds so far have been in Franconia, Saxony, Thuringia, Brandenburg, northern Germany, and Berlin.

Reiner Sörries, the head of the Museum of Sepulchral Culture in Kassel, is making the first attempts to explain the mystery. Sörries is one of the few archeologists in Germany who studies burial culture. He suspects that religious reformer Martin Luther may have triggered the trend for mummification in the modern age. By way of proof, Sörries cites a passage in the Book of Job that Luther translated into common German: "I know that my Redeemer lives, and that in the end he will stand upon the earth. And after my skin has been destroyed, yet in my flesh, I will see God."

Maybe wealthy protestants chose this method of mummification out of fear that they might not rise up and go to heaven if their mortal remains rotted away? "There are still many gaps that we can't fill in," Sörries admits. "It is conceivable that people simply wanted to play it safe and preserve their bodies until Judgment Day."

Whatever the answer, superstition undoubtedly played a role. Bereaved families often sealed the coffins of their departed loved ones to prevent the dead rising up. There was fear that zombies could climb out of their crypts and attack the living.

The group of scientists working with Sörries, Rosendahl and Ströbl now wants to look closer at the bizarre burial rite. This involves researching how the mummified dead actually lived. Using computer tomography, the researchers constructed an image of the late Baron von Holz' face. From this, one sees that the tall warrior must have cut quite a formidable figure. He had the angular skull of a rugby player and remarkably healthy teeth for the period.

Ströbl hopes to be able to come up with similar insights into a potentially criminal case he unearthed in a family tomb in the Wettenbergen neighborhood in Hannover, which mainly contains members of two aristocratic families, von Hansing and von Grone. Strangely, four daughters in one of the families died in four consecutive years. Had the daughters of this household fallen victim to a virus in their youth? Or was it a case of murder? An analysis of the four girls' internal organs should provide information that could answer this question.

Another fascinating insight into the bygone era is provided by 29 very well preserved mummies found in a vault under the church of the Benedictine abbey in the town of Riesa, in the eastern German state of Saxony. Experts consider the church's crypt a unique historical testament to mummification in Germany. Construction work last fall drew the researchers' attention to the aristocratic tomb.

While the region was still part of what was formerly communist East Germany, the bare minimum of preservation work was done on the site. Now, however, the local church council is embroiled in a dispute about what to do with this cultural monument. Some want the crypt, which is only accessible down a narrow stairway, opened up to tourists. But the majority of councilors want to put tight restrictions on public entry.

The site is unique for the look it provides at the authentic period costumes worn by wealthy citizens in past centuries. One girl, for instance, is wearing a perfectly preserved silk dress and has a bonnet on her head. Other bodies were adorned with nightcaps, pointed caps, and long robes.

The identity of the 29 corpses is relatively certain. Uncertainty surrounds only the most famous of the crypt's inhabitants, who may or may not be Ernst Otto Innocenz, Baron von Odeleben, a Saxon officer with close ties to Napoleon.

In 1812, Odeleben supported the French general's ill-fated Russian campaign, which ended in a fiasco. Subsequently, Odeleben also witnessed the routing of the French army near Leipzig.

Genetic analysis is being used to help clear up this mystery. But in contrast to Baron von Holz, the researchers won't be looking for battle scars that may have led to his death. The war veteran spent the last decades of his life working as a land surveyor, and he passed away at his desk.